Map of the Heart by Susan Wiggs 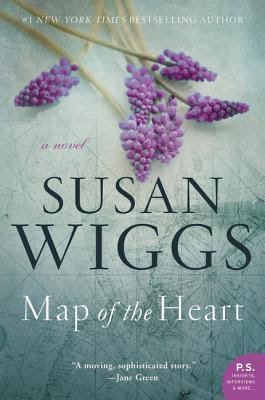 Camille used to be a photographer but she put away her camera and her fearless lifestyle after her husband's tragic death. And, her daughter Julie may as well be packed in bubble wrap. Now, she processes found rolls of film, teasing out images that could easily be ruined. When Julie has an accident, in her rush to get to the hospital Camille ruins an important roll of film preserved from the Vietnam War, throwing her in the path of Finn.

Finn wanted a family but instead he ended up divorced. Now, he lives and works in France, not far from where Camille's father grew up. When something goes wrong at Camille's father Henry's French estate and a mysterious crate is exposed, a set of photos and a camera are sent to Henry in the United States and they pique Camille's interest. As frightened as she is to leave the safety of home, Camille's curiosity about her paternal grandmother convinces her to accompany her father and daughter to France for the summer, where once again she'll meet up with Finn. But, will she let herself dare to open her heart again?

There's also an unfolding mystery set during WWII, which I really enjoyed, but I think the contemporary romance part of the book dominates Map of the Heart.

Recommended but not a favorite - I don't know what it was about Map of the Heart that made it drag, but I had a terrible time getting into it. Once I did, though, I enjoyed it. A sweet, fairly predictable story of WWII combined with a present-day romance. Good for summer reading but not brilliant. I found the fact that Henry's estate just happened to be near the place Finn was working in France a bit too convenient.

I received a copy of Map of the Heart from HarperCollins for review (many thanks!) It's my second book by Susan Wiggs. While I found this one so-so, I absolutely loved the first book I read by her, Between You and Me, and will definitely give her another try.