25 Days 'Til Christmas by Poppy Alexander 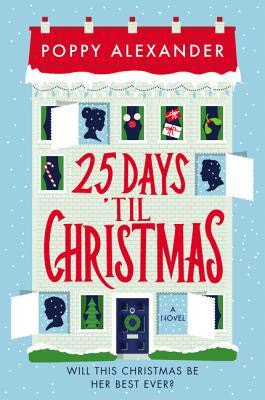 In 25 Days 'Til Christmas Kate (widowed 4 years ago) and her son Jack are having a challenging Christmas season but she's doing everything she can to make Christmas as magical as possible. She's come up with daily activities to keep Jack busy and try to keep him from realizing just how poor they have become. Kate works at a department store on a rolling contract. Every year, it's possible she could lose her job and this year the boss is being particularly threatening. At school, Jack is having difficulties and the faculty wants to send him to what we Americans would call a reform school, although the book is set in Bristol, England so it has a different name. At the same time, her mother-in-law is running out of pension money for use in the care home, where she is deteriorating rapidly from Alzheimer's, and the government is threatening to pull her supplementary funds.

Daniel lost his sister Zoe, last year, and it still stings. The one thing that he's looking forward to, this year, is seeing the woman he privately refers to as "Christmas Tree Girl". He hasn't ever formally met Kate, but he knows that she will be there selling Christmas trees in her little elf costume. He wonders if she'll remember him and wonder what became of Zoe. When Daniel's not working as a chartered surveyor, he answers a help line and listens to people's problems, talks them out of suicide, or sometimes is just there for the lonely.

Daniel and Kate have a little trouble getting together, at first, but eventually they meet and start seeing each other. The problem is that Kate is utterly overwhelmed with all her problems and unsure she can or should replace Jack's father, Tom. Is there a way to solve her financial issues beyond her home jewelry-making? How will she deal with the bullying and sexual innuendo by her boss? Can she get Jack into a school that will meet his needs and keep him happy, rather than one that's set up for those with bad behavior? What will she do about her mother-in-law's draining finances when she has so little of her own?

Recommended but I advise skimming some parts if you find them dull - There is a LOT going on in this book. There were times it was a bit too much for me and, at some point, I decided I'd be best off skimming certain bits. For example, Kate is put in charge of a fundraising effort for the department store and has to come up with costumes for her child and his best friend on top of everything else. I found the fundraising meetings as dull as they are in real life (been there), so eventually I decided to skim those and some other bits of meetings in which Daniel was trying to help the shopkeepers of a cluster of shops called Christmas Steps — which actually exists; you can look up photos online.

I think the author created a few too many threads in this story. And yet, like a Hallmark movie, it came together beautifully in the end, almost too perfectly (as a romance should). I closed the book happy and satisfied. When I went to rate the book, I noticed that someone had given it 1 star because she found it too sad, thanks to Kate's overwhelming financial issues. I actually enjoyed reading about the realistic struggle she was going through. I found at least one of the resolutions a little too easy and pat, so I knocked off a point for that and the occasional stretch (meetings, ugh) that I found dull, but overall I loved 25 Days 'Til Christmas. I liked Kate's creativity and determination to make things as cheery as possible for her son, and I adored Daniel for his kindness and generosity. They're a couple that you can root for and they deserve a lovely ending. A sweet Christmas story about hardship, grief, and finding happily-ever-after when it seems like nothing is ever going to be right, again.