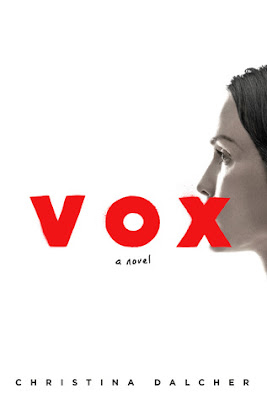 In the world of Vox by Christina Dalcher, extremist Christians have taken over education, politics, healthcare, the banking system, and government in general in the United States. A televangelist is in a position of power in the government and the "separation of church and state" no longer exists. Dr. Jean McClellan didn't see it coming but her grad-school roommate did. While the earliest movement toward the far right was slow, things moved quickly after the latest president moved into office and women have been forced to stay quietly married at home, choose a mate, or face the consequences.

Change came quickly: the job losses, the wrist trackers, and the silence. Women in the America of Vox are no longer allowed to work, control money, or speak more than 100 words per day. The punishments for disobedience and aberrations (like homosexuality) are severe.

But, then something happens. The president's brother has been injured in a ski accident and the part of the brain that was Dr. McClellan's area in her research is the part that he's damaged. Suddenly, people are begging her to return to her work to find a cure. She's only interested under certain conditions. But, she knows that as soon as her work is done, she'll be back to subservience and quiet. And, there's something fishy going on. Did someone know the president's brother was going to suffer an injury? Is there more to the job than meets the eye?

Jean knows that she needs to find the answers but she also needs to try to drag out her research long enough to find a way to keep from returning to the circumstances of the past year. Will she be forced to rush a cure and return to being locked in silence, unable even to use hand gestures to speak? Or, will Jean and her friends and fellow researchers find a way to end the silence?

Highly recommended - I was so gripped by this book that I didn't want to set it down, the night I opened it. The result was a book in the face. Oops. I finally had no choice but to turn the light out because I kept falling asleep. But, I picked it up as soon as possible and finished it, the next day. Funny, since I'd seen mixed reviews and was concerned. I would never have guessed it would end up on the favorites pile. Good surprise! I did think there was a little bit of convenience to one particular plot point, and after I closed the book another plot point started to make very little sense, on reflection, but . . . who cares. I loved it.

My thanks to Berkley Books for the review copy! And, yes, I agree with the cover quote saying Vox is "sure to beg comparisons" to The Handmaid's Tale. I did occasionally think of Margaret Atwood's own dystopian version of a women-suppressing, mysogynistic society. Christina Dalcher's world, though, is unique. I never had the sensation that she was borrowing from Atwood in any way.