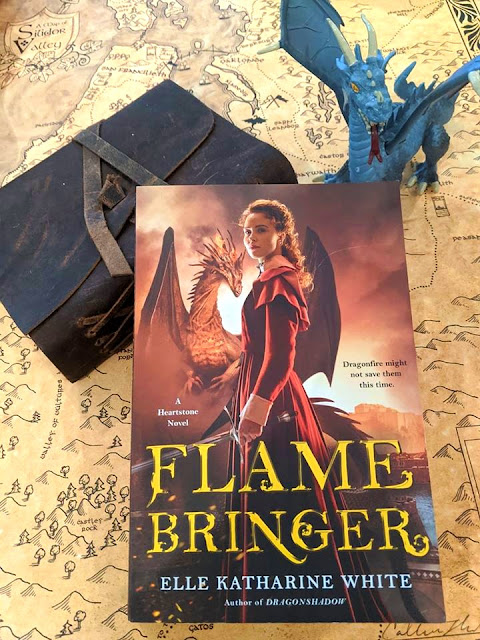 Flamebringer is the third and final book in the Heartstone trilogy and I was so excited to read it. Even the sluggishness of my pandemic reading didn't dim the thrill although, yes, it did take longer for me to read it than it normally would have.

In the first novel, Heartstone, Aliza Bentaine discovers both love and a fighting spirit when her family and friends are faced with invading enemies and a fierce battle. In Dragonshadow, Aliza accompanies her dragon rider husband on a job that requires flying over dangerous lands where monsters lurk. In Flamebringer, Aliza and Alistair Daired fly home from their job in the second book, but they initially make an error in trying to chase someone down and end up captured by a previously unknown enemy. While imprisoned, they find out about creatures older than the Oldkind and the grudge those older creatures have against the Daireds.

When it turns out everything Aliza and Alistair have known as both history and legend may not be entirely true, what can be done to save everyone from this new, ancient enemy? A final battle will take many lives, some close to Aliza and Alistair, but will they be able to vanquish the evil for good?

Highly recommended - I loved this series. The first book was basically Pride and Prejudice with dragons and I felt like it was a little slow, at times, but it was worth sticking out the dances and other interactions that were a clear parallel to Pride and Prejudice for the exciting action scenes. The second book was adventurous but had a few too many monsters, to the point that it was a little difficult keeping track of them all, but I still liked it. But, Flamebringer brought it all together with plenty of action and danger and fewer different types of creatures to keep track of. I thought it was an absolutely perfect ending to the series. In fact, I loved Flamebringer so much that I may hang onto the entire series for a reread. And, I am not particularly fond of fantasy series. The Heartstone series is loads of fun. I'll be keeping my eye out for future books by Elle Katharine White!

My thanks to HarperVoyager for the review copy of Flamebringer!


©2020 Nancy Horner. All rights reserved. If you are reading this post at a site other than Bookfoolery or its RSS feed, you are reading a stolen feed. Email bookfoolery@gmail.com for written permission to reproduce text or photos.
Posted by Bookfool at 11:36 AM