The Love Story of Missy Carmichael by Beth Morrey 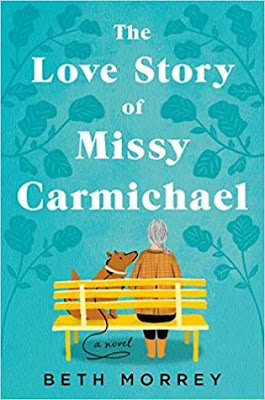 Millicent "Missy" Carmichael is old and tired and very lonely but she's not entirely sure what to do about her loneliness as The Love Story of Missy Carmichael opens. She's been rattling around alone in a very large house since her beloved Leo has gone. She's had a falling out with her daughter Melanie and her son Alistair and his family are living in Australia, so very far from London that all she has to look forward to is their annual Christmas visits.

Then, Missy decides that she needs to try living again and she begins by walking to a local coffee shop, dropping by a park, going a little farther than she's really comfortable with. And, while she's trying to stretch herself a little, she meets Angela, her son Otis (who is the same age as her grandson Arthur, in Australia) and Sylvie. When Angela and Sylvie continue to pursue a friendship Missy is certain she doesn't want, things begin to change.

While Missy's circle of friends is slowly growing (including a dog, something she's never been too fond of) and even the interior of her home is changing, she also reflects back on her early years — her childhood, the many deaths of family members, how she met her husband and married him, motherhood. She's always thought herself a bit of a failure. But, was she? Is it too late to make amends for her mistakes? Can she forgive herself and discover the things she's done right, over the years?

Highly recommended - I loved this book. I think it was the comparison to A Man Called Ove that piqued my interest when I was offered The Love Story of Missy Carmichael for review and there are some similarities. Missy is 79. She's not a curmudgeon like Ove, but she has effectively avoided everyone but her family when possible and isn't quite sure how to make friends. She also initially seems quite negative. Missy tries to avoid those who reach out to her, at first, but she finds Angela interesting (Angela and Otis give her something to write to Alistair about) and Sylvie is a breath of fresh air. And, as her friendships grow and blossom, you get to know her history, how she became the person she is, and what she's lived through. She is so much better than her internal monologue makes you think, in the beginning. I love books about friends who become a sort of surrogate family and The Love Story of Missy Carmichael is that sort of book. The ending will break you a little, but in a good way. Keep tissues handy.

My thanks to G. P. Putnam's Sons for the review copy!