Agnes at the End of the World by Kelly McWilliams 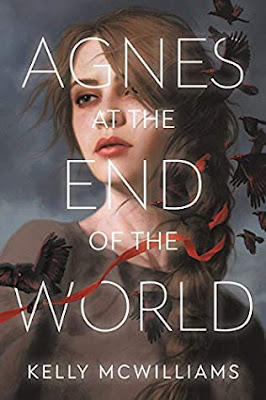 I bought a copy of Agnes at the End of the World by Kelly McWilliams after seeing that Mike Chen, author of A Beginning at the End, was going to talk to Kelly McWilliams about what it's like to release a pandemic novel in the midst of a genuine pandemic (which both of them have done). I neglected to put the time for that talk on my calendar but would have really liked to sit in. However, I did make a beeline to buy a copy of Agnes because I love a good pandemic novel.

In fact, I don't really consider Agnes at the End of the World a "pandemic" novel, per se, although there is a pandemic in the book and it is the catalyst for change. The vast majority of the book focuses on Agnes, her life as a woman in a restrictive and isolated apocalyptic cult community that's been around for several generations, how she became the perfect, compliant member of her community and what caused her to break the rules, in the first place, then really break them when the "Prophet" in her community forces everyone to go into a dark and terrifying underground bunker and Agnes breaks away with her little brother.

There's what I'd call a paranormal, spiritual, or mystical aspect to this story. Agnes has a special ability to hear the natural world. The stars sing, the trees hum, sometimes she thinks she's spoken to directly by God. The cult and Agnes's realization of how she's been deceived is a major part of the storyline but first you get to know Agnes and see her daily life. Then, you realize something is going to have to change (it's obvious why). But, it's not clear that Agnes will have to do more than just run away till later in the book, as her powers grow.

Highly recommended - ⭐️⭐️⭐️⭐️⭐️⁣  Excellent writing. I felt entirely immersed in Agnes's uncomfortable world. While not exactly what I was expecting, once I got into Agnes at the End of the World, I was eager to race to the ending and particularly enjoyed what happened after she escaped.

The religious/mystical aspect of Agnes at the End of the World was a little off-putting to me, at first, but also a bit familiar as I grew up Baptist and dated a fundamentalist during high school (women only were allowed to wear skirts or dresses in his church, which I attended while we were dating). I could relate to the tug between personal beliefs and the thought that there must be something better, at least as far as the treatment of women. And, there's this: A friend of mine (now deceased) once told me she learned her psychic abilities by first learning to listen to the land when her father, a farmer, picked up a handful of dirt and said, "The soil will tell you what it requires." Partly because of that friend, Mary, the woo-woo part of the book actually felt quite real to me.

Many thanks to author Mike Chen for the recommendation. Also, you should read his books.


©2020 Nancy Horner. All rights reserved. If you are reading this post at a site other than Bookfoolery or its RSS feed, you are reading a stolen feed. Email bookfoolery@gmail.com for written permission to reproduce text or photos.
Posted by Bookfool at 10:42 AM