The Magic in Changing Your Stars by Leah Henderson

First, apologies for not having a better image of this book's cover. I am having some formatting issues and the new Blogger platform is giving me fits, so I've defaulted to an image I took for Instagram (complete with tap shoes). You should be able to click on the image to enlarge it. I couldn't get a saved image of just the cover to load properly. 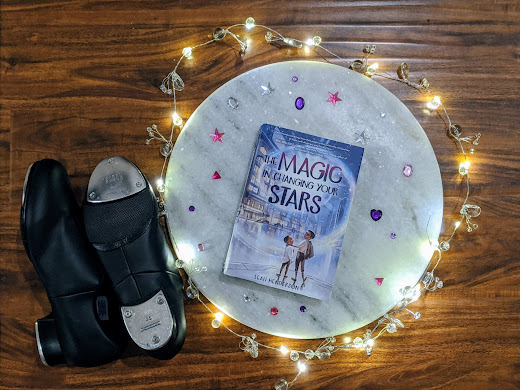 The Magic in Changing Your Stars by Leah Henderson is a middle grade book about a boy named Ailey who desperately wants to win the role of the Scarecrow in his school's production of The Wiz. He's a rapper and a dancer but he can't sing and he's not so hot at memorizing lines. Still, he's made up his mind; Scarecrow is the role he wants and he's certain he can make the role unique, both in the way he moves and dresses.

But, when it's Ailey's turn to try out for the role, he totally freezes and can't remember a single line. His competition, a girl named Mahalia with a fabulous voice, does a fantastic job of trying out so Ailey is certain he won't get a callback. Feeling defeated, he goes home and later admits what happened to his grampa [sic], who is in a hospital bed. Grampa tells him the secret he's kept from all but one person, about his own personal defeat and how he's lived with regret his entire life.

Grampa sends Ailey to fetch and care for a pair of tap shoes that were given to him by the famous dancer Bill "Bojangles" Robinson and when Ailey makes a wish, the shoes magically transport him back in time, to the day of Grampa's mistake. Can Ailey convince a young Grampa, then known as "Taps", that he has the talent and help him summon the courage to dance for Mr. Robinson? Together, will they change the way the stars align for the old man he adores?

Recommended but not a favorite - I didn't love the writing style, which kept The Magic in Changing Your Stars from being a favorite, but I did love the story and got totally sucked up into it, at least partly because I'm a sucker for anything that involves time travel. But, I also liked the theme that hard work pays off and even if it's painful or embarrassing or terrifying, you should do your best to make your heart's desire come true.

I recognized a few famous names used by the author as character names but only a few, so I also really loved the fact that the author included a substantial list of character names she used in the book and where they came from. That list would be terrific for kids looking for ideas for Black History Month as it described each famous Black person briefly but enough that it certainly piqued my interest to read more about some I'd never heard of.