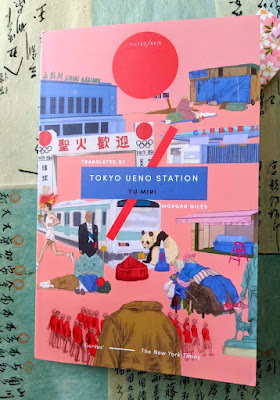 I never carried any photos with me, but I was always surrounded by people, places, and times gone by. And as I retreated into the future, the only thing I could ever see was the past.

And in the winter, my mother and Setsuko would knit sweaters for everyone in the family. We could only afford cheap yarn and thread so the sweaters quickly developed holes, but the women would repair them neatly.

I confess that I bought Tokyo Ueno Station by Yū Miri (who also goes by Miri Yū) for two completely shallow reasons:

1. I loved the cover
2. It has Tokyo in the title and I've been slowly collecting Japanese titles, particularly if the setting is a place I've visited.

The interesting thing is about buying Tokyo Ueno Station based mostly on the cover is that I saw the train station, the bus, the man in the fancy suit, the runner, the panda . . . and totally overlooked the homeless people lying on the ground, on a pile of possessions, in front of a makeshift hut. But, that's the one of the main settings and the viewpoint of the main character, who is looking back at his life. He's speaking from beyond, now, but his last years were spent in a homeless encampment in the park adjoining a Tokyo train station. And, as you're reading it, you can't help but theorize about how he ended up there.

Kazu was born in Fukushima in 1933. His family lived in poverty and even after marriage he had to travel wherever necessary to earn money. Most of the time, that meant he wasn't home to spend time with his wife and see his children grow. When tragedy struck for the first time, Kazu was shocked to his core and grieved deeply. More tragedy followed and eventually he moved to Tokyo, but why? What happened that led to Kazu's homelessness? And, what are the odd parallels between Kazu's life of struggle and the Imperial family?

I think one of the things that fascinates me the most about Tokyo Ueno Station is that it sounds like it is an utterly depressing story and yet I didn't find it depressing. Yes, Kazu's life appears to fit the words, "Life sucks and then you die." And, yet, there is something about his acceptance of all of the hardship thrown at him and his final passing that I found almost uplifting. At any rate, I didn't find the book depressing at all.

Recommended - I would not read this book when you're already down in the dumps because it might affect other people negatively, but I found Tokyo Ueno Station brilliantly written and engrossing. The story jumps back and forth in time but you don't know till nearly the end (although, when you hear the name "Fukushima" you can assume the final tragedy) what happened to Kazu to drive him to life in a hut made of cardboard and other scraps. It was not exactly what I expected.

What I love best about Tokyo Ueno Station is the way it places you in Kazu's world, so you really get a feel for why that expression about poverty being expensive means. The story about the cheap yarn made me think of the story I recently read about how a wealthy person can afford quality boots that will last years and years but a poor person will have to buy several pairs over the same time period because s/he can afford only a lesser quality that falls apart. In the long run, the person with less money ends up spending more.

You also see how the homeless are overlooked, almost invisible until they become an eyesore and must be tucked out of sight. You get an idea how grief can drive someone to run away from himself and his life. Tokyo Ueno Station is a harsh story but a deeply meaningful one. I'm so glad I bought it on impulse.


©2020 Nancy Horner. All rights reserved. If you are reading this post at a site other than Bookfoolery or its RSS feed, you are reading a stolen feed. Email bookfoolery@gmail.com for written permission to reproduce text or photos.
Posted by Bookfool at 1:17 PM