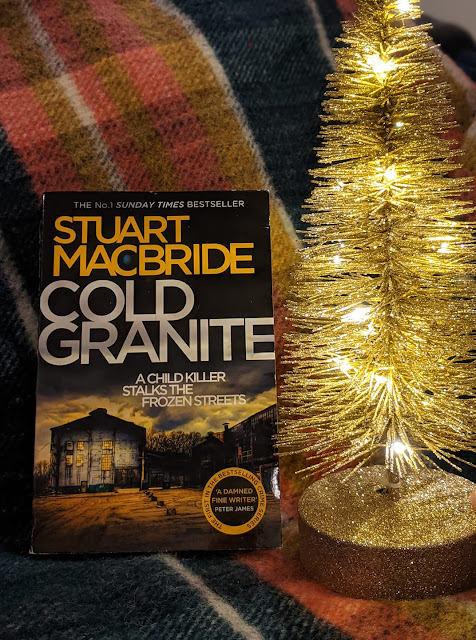 Talk about an unusual read for this bookfool! I don't read true crime, anymore, and seldom read crime novels for the same reason. I used to read both all the time. I stopped reading true crime when my husband told me he was coming home to find me in tears a little too often and I needed to give it up. Crime novels and mysteries . . . burnout. I was addicted to a number of mystery series for several years and then just suddenly couldn't stand them. Now, I really no longer have the ability to freeze out the yuck from my brain (not that I was very good at it in the first place -- see: Husband Advice). But, after a slumpy month, I needed to shake up my reading and I've found the best way to knock myself out of a slump is to read something very different from my normal fare. So, there you go.

Cold Granite does have a lot of gruesome scenes, incidentally. If you can't tolerate them (particularly if you're upset by crime against children) you might want to avoid this, although I think the writing is exceptional and it was because of that fact that I was able to overlook the most disgusting bits.

Detective Sergeant Logan McRae of Aberdeen, Scotland has just returned to work after nearly being killed in the line of duty. Now, Aberdeen seems to have a child killer on the loose. Within days, bodies are found and several children go missing. Logan is still occasionally having some trouble with his injury, so the new boss assigns a uniformed female Police Constable to work with him . . . or, maybe babysit him. He's not too happy about it, at first.

There is so much that happens in this book that I don't think I can even unravel it enough to talk about the various threads but there's a man who has a mental problem and collects the dead animals he scoops up from the side of the road, a young man who has been caught in a crime of his own and has to testify about the abuse he suffered when he was in a hospital, and Logan dealing with a new boss who isn't sure he should be back at work and an old flame at work who wants to stay well away from him. There's also a reporter who keeps coming up with information he shouldn't have and publicizing it and he wants to weasel information out of Logan. Suffice it to say, Cold Granite is nicely complex and twisty.

Meanwhile, it's very cold and snowy in Aberdeen, which feeds into the mood. There's mention of Christmas decorations, so there's a tiny bit of the season injected. It's way too grisly to call a Christmas read, though.

Highly recommended but not for the faint of heart - I'm normally the faint of heart and I really had to work at shutting out the images of autopsies and decomposed bodies, but I thought Cold Granite was incredibly well-written with believable characters and dialogue and I liked Logan. Will I read on in the series? After closing the book, I felt tempted but I'm about to attempt a year-long book-buying ban and read only from my shelves (not even the library). So, it's very unlikely that I'll get to another MacBride book right away. However, I will definitely remember this author and series and I think someday I will try to read on. This particular book was originally published in 2005 so there are quite a few more books in the series.