A Good Scent from a Strange Mountain by Robert Olen Butler 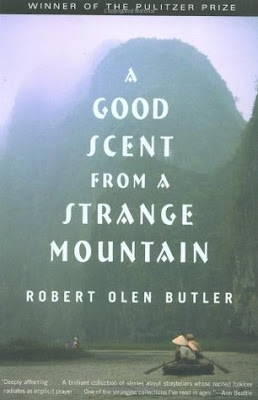 A Good Scent from a Strange Mountain by Robert Olen Butler is a collection of short stories about Vietnamese and Vietnamese-Americans. As you can see from the cover image, it won the Pulitzer Prize back in the 90s. I have to wonder if that would be possible, today, as almost all of the stories (there is at least one exception but I think only one written from the perspective of a white man) are written from the point of view of the Vietnamese person either left behind when the Communists arrived or now living in the U.S. And, of course, Robert Olen Butler's name is all the clue you need to know that he is not Vietnamese.

I think I would have felt dramatically different about these stories when they were newly published. While I found them a little on the heavy side, for the most part I liked the glimpse into what it's like living in a community of immigrants, remembering home, dealing with past trauma, trying and failing to whip up excitement for a game from the home country in a fully American child. Some of the stories were moving or hypnotic or deep. Some were choppy or weird or confusing. There was one story I really did not like, about a woman who was a prostitute in Vietnam and then the US and just wanted to be an American wife. Something about it didn't sit right with me.

My biggest problem with the book, though, was that I couldn't get past the fact that they weren't written by an "own voices" author. Robert Olen Butler apparently worked as a translator during the Vietnam War and here is a quote from the book's cover:

Butler's achievement is not only to reveal the inner lives of the Vietnamese, but to show, through their eyes, how the rest of us appear from an outside perspective.

I mean, how can you say a white guy wrote authentically from the perspective of a Vietnamese? It just bugs me. He may have known enough people from his experience in Vietnam or from hanging around with them in the US to run those stories past some of those who own the authentic voices. But, if he did, it's not mentioned in the book.

Recommended but not a favorite - The writing is often lush and lovely, sometimes a little kaleidoscopic. I can see why A Good Scent from a Strange Mountain was a prize-winning book. But, it was weighty (in an emotional way) and I was bothered by the fact that it was not a Vietnamese American who wrote it. So, I gave it a 3.5/5 rating at Goodreads, above average but not a book I loved.