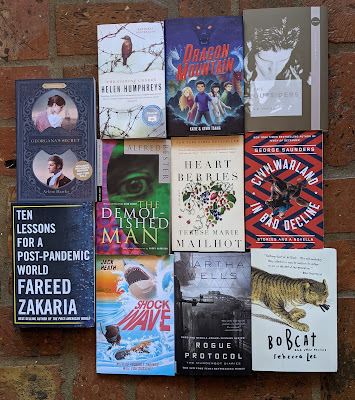 1. Heart Berries by Terese Marie Mailhot - A memoir by a Canadian Native American, written to the object of her obsession and pondering her life, how hard she worked to become educated, and the many challenges and exploitations she and other Native Americans must endure. I found this overwrought and unclear — a little too poetic and vague for my taste, although she does show the challenges Indigenous women, in particular, face. Least favorite of the month.

2. Ten Lessons for a Post-Pandemic World by Fareed Zakaria - The GPS anchor's book about how lessons from the Covid-19 pandemic can be used to improve the world by reducing inequality, improving healthcare, and creating policies for positive change. Lots of territory covered: past and present economic policies including taxes and tariffs, globalization, historic and present-day politics and nationalism, how life changed after past disasters, for better or worse. An exceptional read and a learning experience.

3. Dragon Mountain by Katie and Kevin Tsang - Four children at a cultural language camp in China find their way into a mountain, where they're matched with dragon partners and enter the Dragon Realm to save the world from evil. Adventurous and fast-paced fun for middle graders and this adult absolutely was transported. Looking forward to more installments.

4. CivilWarLand in Bad Decline by George Saunders - My first short story collection for my goal to read a short story per day in 2021 and it was a doozy. George Saunders' first published collection, in a theme park setting, is a hypnotic sort of slowly-building horror and hilarity as his characters face challenges that can be a bit gruesome. The author's note in my edition (click through to see the cover) is every bit as engaging as the book.

5. Georgana's Secret by Arlem Hawks - To escape her abusive grandmother, Georgana has disguised herself as a boy and joined the crew of her father's British Naval frigate but she's not so great at defending herself from bullies. When a new crewman takes her under his wing and teaches her to fight back, will he discover her secret? A swashbuckling romance. Absolutely loved it.

6. Rogue Protocol (The Murderbot Diaries #3) by Martha Wells - The third installment in the Murderbot Diaries series, this time with Murderbot traveling to a distant site where it appears his nemesis, the corporation he used to work for, GrayCris, may be covering up more shenanigans with a fake terraforming project. If so, what's their objective? Another Murderbot book that started out slowly and then became edge-of-your-seat. Love this series.

7. Bobcat and Other Stories by Rebecca Wells - My second finished short story collection makes it obvious I'm not limiting myself to one story per day. Oh, well. I'm enjoying them. Bobcat's stories are mostly tied to academic settings, usually students, a professor, both. Incredibly well drawn characters but not everything is tied up in a pretty bow. I didn't mind. Excellent writing.

8. The Evening Chorus by Helen Humphreys - My favorite of the month because it wouldn't let go of me, The Evening Chorus is about a British prisoner of war who spends his time observing a pair of nesting birds instead of trying to escape, the wife he left behind, and the sister who is bombed out of her London home, and what becomes of them after the war. Captivating and based on a few real-life events.

9. Shock Wave (Pick Your Fate #2) by Jack Heath - Like the old "Choose Your Own Adventure" books, the Pick Your Fate series takes the middle grade reader through a number of challenges during which s/he must decide how to react to try to stay alive. Great for the adventure-loving middle grader or adult.

10. The Demolished Man by Alfred Bester - In the 24th Century, business mogul Ben Reich decides to murder his competition then, with a mind-reading detective on his tail, attempts to throw up enough road blocks to get himself off the hook. Great world building and I particularly enjoyed the latter half.

11. The Outsiders by S. E. Hinton - Modern classic, a tale of two gangs that reveals the humanity on both sides. Amazing storytelling and characterization, especially given the fact that the author was 15 when she began writing it. I was blown away.

As I'm typing this up on Sunday, we've already had a bit of sleet and we're expecting "the worst ice storm in 25 years" so who knows if I'll be able to get online tomorrow to update this post but I'll return to add a link to my review of The Outsiders (currently scheduled to post on Monday morning) later in the week, if we lose power on Monday. January was a low-quantity reading month for me but it was so high quality that I didn't care. Again, the only book I really didn't love was Heart Berries, my first Indigenous read toward my goal of one per month in 2021.

Update: It's Monday, we got tons of sleet with a layer of snow on top (and then it all froze together; it's hazardous out there) and now it's snowing, again! 16° out. We are happy to be indoors.