The Demolished Man by Alfred Bester 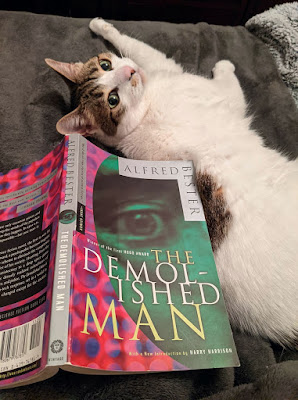 I had no idea what I was getting into when I picked up The Demolished Man by Alfred Bester and began reading. I only knew that I wanted to read something very different from my previous read, The Evening Chorus. Wow, nailed it. Set in the 24th century, The Demolished Man is the story of a wealthy business owner, Ben Reich, who decides he must kill his competition, literally, and the mind-reading detective who uses his fine-tuned ESP skills to prove the killer's guilt.

The setting is a strange future world in which there are settlements on other planets and their satellites, there are rental cars called "jumpers" that can fly short distances, and many people can read minds but there are different levels of mind-reading ability and an exclusive group that only the mind readers can belong to. The detective in the story is at the highest skill level of so-called "espers" or "brain peepers". The murder is shown in first person so you know Reich is guilty and get to follow along as finds a surprising way to block the mind readers around him.

You also get into the POV of the detective, from which you learn his thought process and see what other roadblocks Reich throws up to stop the detective from arresting him and how a computer is used to examine whether or not it will be possible to convict, once he's in their hands.

Highly recommended - A unique and clever storyline, solid world building, and a fairly twisty, fast-paced plot make The Demolished Man a winner. In fact, it turns out The Demolished Man was the very first Hugo award winner. It starts out a little disorienting as you become accustomed to the futuristic world but once you're used to it, the discomfort fades. Even better, the farther you get into the book, the more exciting the action becomes so I particularly enjoyed the latter half.

I liked how unusual the setting was and found the book fascinating for how a 1950s-era author visualized a future world. 70 years after its publication we can laugh at the fact that there were still phone booths, operators, and a computer that takes up a lot of space while only doing fairly basic analytical tasks in his imagined 24th century. But, I think a lot of us could not have conceived of the eventuality that we'd carry our phones everywhere and they would be more powerful than the computers of not that long ago.