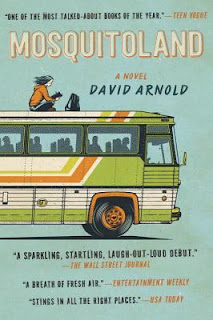 Mini review time! All of these books are from my personal library.
Mosquitoland by David Arnold is a YA book about a teenage girl named Mim Malone. Mim's parents recently divorced and she has moved to Mississippi (the "Mosquitoland" of the title — accurate, by the way) with her father and stepmother. When she finds out her mother is sick, she decides to take a road trip to Ohio. Nobody is saying anything about her mother so she doesn't know how bad her mom's illness might be.
Along the way, Mim meets some quirky people, has a lot of unexpected experiences, and discovers a few things about herself.
Recommended but not a favorite - I had mixed feelings about Mosquitoland but liked it enough to recommend it. It's well plotted (a lot happens) but there were two things that kept it from being a favorite. One is that one of the things Mim sets out to do is resolved but you don't know the full details. That felt like a cop-out to me. The other is that the voice was a little weird and I am frankly tired of super smart young fictional characters. Much of what Mim had to say seemed like it was well beyond her years. She's clearly above average and that just annoyed me. So, that was just a personal issue.
What I particularly loved was the makeshift family trope. On her journey, Mim picks up a friend here, a friend there and they all bond. I did have a little trouble with the Mississippi portion as it sure seemed like the author knew nothing at all about Mississippi beyond the fact that it's hot, humid, and buggy. But, Mississippi itself was somewhat unimportant to the storyline; I liked the fact that I never, ever knew what was going to happen next; and, I warmed up to the strangeness and humor, the farther I got into Mosquitoland. 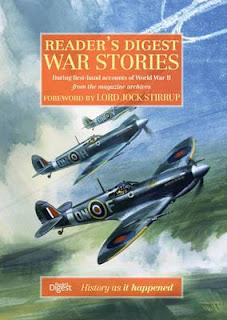 Reader's Digest War Stories is a collection of stories from the Reader's Digest magazine. When I bought the book, I was actually looking for a collection of "Drama in Real Life" stories because it was a "Drama in Real Life" set in London during the Blitz (which I read when I was around 10 years old) that began my interest in WWII. I couldn't find anything like that so I bought the war stories, instead.
Beginning with stories published in 1956, the book contains personal accounts of war experiences, some historical accounts told by writers, "Humor in Uniform" funnies, and a very nice article about the Churchill War Rooms. I had three particular favorites. One was about a man who fell 18,000 feet from an airplane without a parachute, survived, and had to convince his German captors that he was telling the truth about having fallen from a plane. Another was about a woman who worked for the French Resistance in both world wars. And, the third was "This Secret Place," about the War Rooms. We've visited the Churchill War Rooms but there were two general items of interest to me in this particular article. One is that the war rooms could only be visited by appointment at the time, as there was not yet a museum. The other was the fact that you can only learn so much during a museum visit. I found the article filled out a few cracks in my knowledge and, having been there, it was easy to visualize the rooms mentioned as I'd seen them.
Highly recommended - The paper Reader's Digest War Stories is printed on is cheap and my copy has already yellowed, even though it was just published in 2012. And, unfortunately, I didn't realize one of the pages in my secondhand copy had a big chunk missing. Wish I'd known that when I bought it so I could have complained to the seller for not being totally honest about its condition. But, I found the war stories captivating, often terrifying, and I'm very glad I came across it. 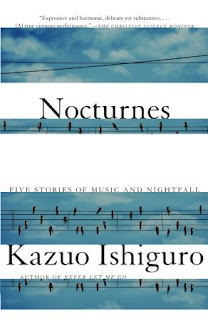 Nocturnes by Kazuo Ishiguro is the third book I've read by Ishiguro. A set of five interconnected stories with music as one of their connecting themes, I read it as part of my challenge to read anthologies and collections of short stories in 2021.
I don't have much to say about Nocturnes, to be honest. The first two stories were very, very odd and I thought I was going to absolutely hate the book, initially. But, I did like the last three. They just weren't brilliant or moving or wise in the way you hope a short story will be. Still, I liked the clarity of Ishiguro's writing style enough to keep going.
Meh - I gave this one an average rating. The stories are strange and generally disappointing but I don't regret reading Nocturnes. However, it fits the pattern. The only book I've loved by Ishiguro is The Remains of the Day. There are two that I've tried to get into several times but found boring. A Pale View of Hills was confusing (I didn't get the imagery) and then upsetting because it contained a senseless killing of kittens. I will never, ever love a book that contains animal abuse of any kind. But, I love The Remains of the Day so much that I will undoubtedly keep trying to find another Ishiguro that I love. This one was just average.
©2021 Nancy Horner. All rights reserved. If you are reading this post at a site other than Bookfoolery or its RSS feed, you are reading a stolen feed. Email bookfoolery@gmail.com for written permission to reproduce text or photos.
Posted by Bookfool at 2:10 PM