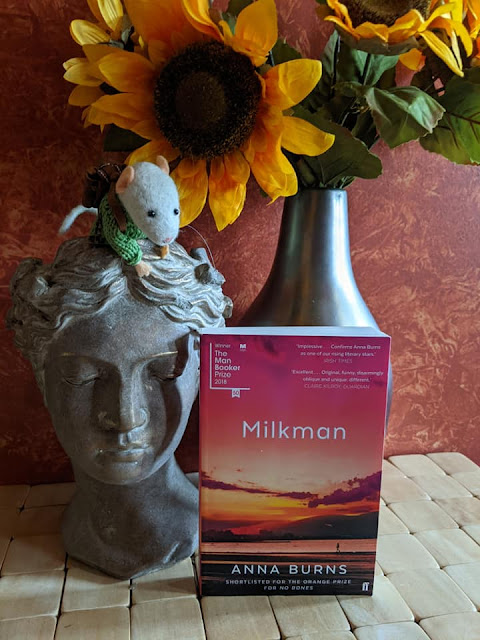 'Hold on a minute,' I said. 'Are you saying it's okay for him to go around with Semtex but not okay for me to read Jane Eyre in public?'

The unnamed heroine known only as Middle Sister in Milkman by Anna Burns is a teenager living in Northern Ireland during the Troubles. She has a boyfriend of sorts, although nothing official, so she refers to him as Maybe Boyfriend. And, she has a job, to which she often walks while reading. After Maybe Boyfriend receives a car part from Over the Water (I think that's right . . . meaning the UK), he's accused of being a sympathizer with the English cause. Shortly after, someone begins following our heroine around and trying to lure her into his vehicle, offering her a ride and noting that it's dangerous the way she walks with her head in a book.

From there, things escalate. The man who offered her the ride is known as the Milkman. But, he's not the Real Milkman who delivers milk. In fact, nobody's quite sure why he's called Milkman. He begins to show up wherever she goes. Clearly, he's watching her, and as he continues trying to talk her into going with him, he also begins to subtly threaten Maybe Boyfriend with comments like, "A guy who works on cars might easily find himself the victim of a car bomb, yes?" (Not a direct quote)

No matter where Middle Sister goes — work, school, the park to run with her brother-in-law — either the Milkman shows up or she hears clicking noises, indicating that someone is taking her picture.

As the incidents increase and the most negative spin possible is made on everything she does, even by her family members, Middle Sister begins to believe that it's not just Maybe Boyfriend who's in danger. Who will survive the escalating tensions caused by the Milkman?

Highly recommended - Milkman is funny, tense, complex, and utterly exhausting because of its lack of paragraph and chapter breaks (there are 7 chapters in approximately 350 pages and the pages are dense, with little white space) but it is a mindblowing, unique and exceptional read. I liked Middle Sister and hoped Milkman wouldn't harm her.

I didn't always understand the subtleties because I found the vast number of factions perplexing. I just don't know enough about the Troubles to know a renouncer from a paramilitary from a hole in the head, although at times I felt like I was getting it. To that end, I'm hoping to read more about The Troubles in the near future (probably 2022 because I can't rush out to buy books about Northern Ireland, right now). Suggestions for books that will help untangle exactly who all the actors were and what they believed, their goals and demands, etc., during the Troubles are welcome.

As I was finishing up the reading, there were some riots in Northern Ireland, the cause of which I known nothing about, but I found it interesting that the news said a gate was destroyed and that gate was in a literal wall that still exists between the Catholic and Protestant sides of the town where rioting occurred. That surprised me. I had no idea those divisions still existed but it makes the book feel even more meaningful.