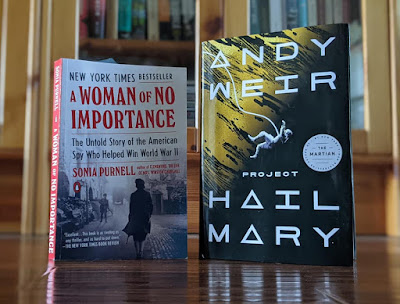 I pre-ordered Project Hail Mary in December of 2020 and it's my last pre-order so there will be no more purchased books coming in unless I indulge in my short list of exceptions. Because my F2F group wasn't meeting at the time I wrote my exceptions, I neglected to make one for discussion books but I think buying one per month for discussion is fine and have mentally added that to the exception list. I will, however, only buy or check out books that I'm legitimately interested in, even though I know I might miss out a little. In this case, I had my husband press the "Buy Now" button for A Woman of No Importance because I just couldn't bear the thought of breaking my 4 1/2 month streak of not purchasing. Silly, but true.

This was a pretty fantastic two weeks for reading! The Gap is by an Australian paramedic (my second read by him) and it is a memoir covering a single summer in Sydney. It's very, very good. The Magician's Elephant is sweet and funny and so creative. I love Kate DiCamillo's brain. I read it on a day when the power went out. Fortunately, I'd just charged my iPad, which has the Kindle app on it. After I finished The Magician's Elephant, I read Rose Mellie Rose. It's a tragic story but I found it oddly compelling and hard to put down.
And, last but not least, I read Simon Van Booy's latest, Night Came with Many Stars, and was just blown away. It's such a good story and it's set in Kentucky! But, you'd never know the author is British. I'll review Night Came with Many Stars ASAP. I've got a link to where you can send for a signed copy. You definitely should do that.
Currently reading:
I got a late start on A Woman of No Importance (discussion is this week!) so I'm focusing on that and then I'll get back to reading Stories of Your Life and Others by Ted Chiang. And, I have a novel picked out but I'm a moody reader so best not to mention it till I've begun reading. It'll be a few days. Who knows if I'll want to read the same book by Thursday?

Not many posts for good reason. We had not one but two power outages and numerous intense storms (I always unplug my computer during storms). There were 19 tornadoes on a Sunday, followed by more on Tuesday, when we lost power for three hours. No big deal, right? The power was back on soon enough, although we also lost cell service during that time and had to scramble to find the weather radio because we were watching a weather update saying there was a tornado in our immediate area when the power went off. After that storm passed, we thought we were golden. Wrong.

The next day, the power went off in spite of the fact that the sun was shining. And, because there had been 19 tornadoes on Sunday and more on Tuesday, there were a significant number of businesses and homes without power. So, we just had to wait our turn and that took about 22 1/2 hours. Fortunately, it was unseasonably cool so we opened the windows until time to sleep and while I still didn't sleep a wink, it really wasn't too stuffy in the house. And, wow, everyone around us seems to have a generator so we had to deal with tolerating the noise of the neighbors' generators. They are loud!!

Meanwhile, we were having work done on our yard. We discovered our shrubs had a fungus and I already had hired someone to clean up the yard, take out some trees and shrubs, and trim and weed-eat. After we discovered that the camellias were going to die anyway, the project became bigger and we ended up having our front gardens overhauled. I really got lucky and hired a terrific guy. I spent a lot of time outside talking to him about what I wanted done and he listened and offered advice. It just looks fantastic. I've also hired someone to replace our guttering and check the wood beneath since a portion of it keeps sagging (there might be some rotten wood trim) so I had people coming for estimates.

And, then we had to run up North to a placed called Powder Keg Finishes, where we fetched the iron patio furniture we had them repaint. It looks so good!!! We thought about doing the sanding and repainting ourselves (the paint was peeling and in some places the chairs and table were rusting but the furniture is otherwise in great shape) but decided we'd probably make a hash of it. I found Powder Keg on Instagram when a local I follow recommended them and they did such a great job. I'm so pleased with the work we've had done.

Point being, all that explains why I haven't posted more reviews, although you already know this hasn't been my best reading year and I have good and bad weeks even without a bunch of errands and power outages.

Well, now that I babbled about my life, there's not much other news besides the birth of our nephew's first child. He's adorable, of course. We haven't watched much TV. I just finished Season 3 of Chuck and started Season 4. The first 3 seasons are known to be the best and the latter 2 kind of disappointing (and the tone has changed pretty drastically in Season 4, as well as the set-up) but I'm going to watch the entire series, anyway. We've been too busy to watch much of anything else.

Of the random things we've managed to view, there have been maybe two episodes of Good Morning, Britain (it's cheery), one of Foyle's War (which, I swear, had a familiar indoor setting but Husband thinks the golden tiled columns in Episode 2 of the first season could probably be found anywhere, not just the one building we've been inside), some episodes of the old Naked Chef show (from which Husband got a terrific, very rich chocolate cup recipe that he made on Mother's Day), and a bunch of hockey because we briefly had a hockey channel for free.

Also, we went to a baseball game, which was a bit unnerving. Masks were supposed to be mandatory in the ballpark but nobody required them at the entry and maybe 5% of the fans were wearing them. We're stepping into this mask-free world slowly and I'm still not comfortable going without in a crowd so we stayed pretty far away from people, apart from that one half hour when we ate nachos. And, they were worth taking off the masks for. I don't know how I feel about the CDC's announcement (almost a week after the ball game) that those who are fully vaccinated can now ditch the masks except in crowds. There's no way to tell a vaccinated person from an unvaccinated one. People are still getting sick and hundreds are still dying every day in the US. So, it doesn't feel like we should let our guard down, yet. However, I've always been fine with wearing a mask. It's a great excuse to ditch the makeup.

Fingers crossed the Indian "double variant" doesn't make it to our shores but I think it's likely it will, eventually, so I'm going to just keep the mindset that I need to be prepared to resume hermiting. I'm really quite good at hermiting. I have an excellent home library.