The Little Spacecraft That Could by Joyce Lapin and Simona Ceccarelli 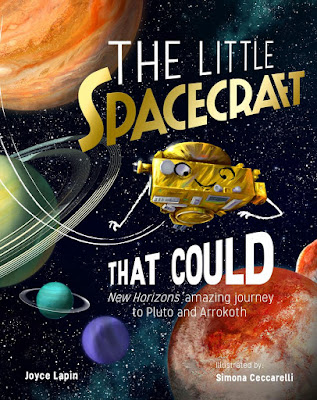 The Little Spacecraft That Could by Joyce Lapin, illustrated by Simona Ceccarelli, is about the spacecraft that traveled to Pluto and then onward to view a snowman-shaped object in the Kuiper Belt called Arrokoth, sending back photos of both our most distant planet and a unique object that nobody even knew existed when the spacecraft left the Earth.

If you're thinking of the story with a similar name (The Little Engine That Could), throw that idea out the window. It's not about huffing and puffing through space but a nonfiction book with lots of facts about the spacecraft New Horizons — its size, how it used another planet's gravity to slingshot outward at a faster rate, how important it was to get the trajectory of New Horizons just right, how long it took to get to Pluto, what kind of information it sent back to Earth and how long it took for the spacecraft to communicate with NASA as it traveled farther away, etc.

The Little Spacecraft That Could also talks about Pluto's journey from being called a planet to losing its "planet" designation, and then back to being a planet but now called a "dwarf planet" and how that all came about. I confess, this is the part that interested me the most because I'm old enough to have been a child who had to memorize the nine planets and do projects with them. Like most folks, I was shocked when scientists announced that Pluto had been taken off our list of planets. How and why did that happen and why did it get its designation back, but slightly altered? It's satisfying to finally have the answers.

I call this kind of book a "picture book for young readers" because it's a book for slightly older elementary level children but which is still picture-book sized and loaded with gorgeous illustrations.

Highly recommended - The Little Spacecraft That Could would make an excellent resource for either an elementary school library or a science classroom, a nice addition to the library of anyone who has a passion for astronomy and/or NASA, or just a fun read for anyone curious about the journey of a spacecraft to our most distant planet and what exactly it found upon its arrival. It contains a very nice, 2-page glossary.

There are so many fascinating bits of information about Pluto, our solar system, the spacecraft's journey, and what it found when it arrived in The Little Spacecraft That Could that I'm going to have to muzzle myself a bit. It's just the size of a piano! It's powered by plutonium! The only thing I found a little uncomfortable (at first . . . but I got over it) was the anthropomorphizing of a spacecraft in a nonfiction book. But, it makes the book a little more palatable for youngsters, I'm sure, and makes for cool spreads like this, showing the little spacecraft crying, "Wheee!" as it uses Jupiter's gravity to increase its speed (click on image to enlarge): 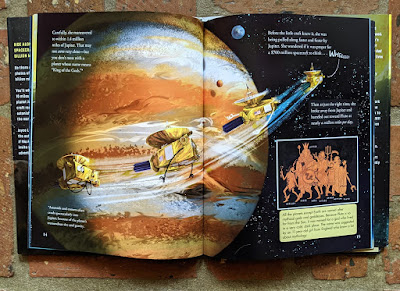 Fun and educational! Many thanks to Sterling Children's Books for the review copy!