Looking for Alaska by Peter Jenkins 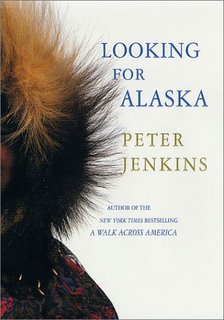 Peter Jenkins is well-known for his first travel memoir, in which he went searching for himself and his country in A Walk Across America. Nearly twenty years later and with seven published adventure books to his credit, now a father of six, Peter was feeling a little disillusioned and in need of a fresh adventure. So, he moved to Seward, Alaska for 18 months. Various members of his family popped in and out and joined him on a number of jaunts, with only his wife and youngest daughter remaining in Seward, occasionally tagging along on his journeys, year-round.

During his time in Alaska, Jenkins got to know the locals and was invited on a wide variety of adventures in which he observed a whale hunt, flew thousands of miles in bush planes, stayed with a man who lived 60 miles away from civilization and not that far from the Arctic Circle (on snow machines), visited an Iditarod musher and went mushing, took fishing trips, and kayaked to remote locations. Even as seasoned a traveler as Jenkins is, he was utterly awestruck by the scenery, the colors, and the people.

It took me a while to get into this book and to become accustomed to his sometimes-annoying introspection; but, as far as books worth reading before setting out for the areas discussed, this particular memoir is superb. I read the vast majority of this book on the plane to Anchorage and then finished up while we were in Seward, this past week. Thanks to Jenkins, I noticed and was aware of details that otherwise would have escaped me. Hobo Jim, for example, is mentioned and described in detail; he’s Alaska’s beloved balladeer. A sign with his photo hung on a Seward bar. I would have overlooked it and I certainly wouldn’t have managed to talk my husband into buying a CD of his hits when we stopped for drinks in Russian River, had I not already babbled on about him. The family loved the CD and listened to it on winding Alaska roads, the perfect accompaniment for a drive through the mountains.

Jenkins is humble and, apparently, has a love of people that is obvious immediately to most. As a result, folks opened up to him and chatted freely, invited him into their homes, and shared in a way one might not expect. As it turned out, we’ve never encountered friendlier people outside of our home territory in Oklahoma; his adventures seemed much less surprising when surrounded by a people of such remarkable warmth, humor, and openness. It’s the detail of his descriptions that make the book shine. He could stand a bit of grammatical help, now and then, but otherwise the book is excellent and I recommend it highly.

Bookfool still on an Alaska High
Posted by Bookfool at 2:22 PM