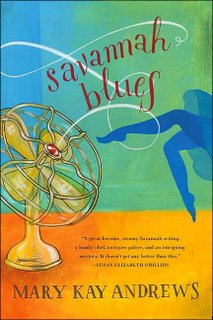 I've been trying to put a finger on what exactly it is about Mary Kay Andrews' books that I dislike. Savannah Blues is my second read by Andrews. The first was Hissy Fit. Everyone I've spoken to who's read Hissy Fit loved it. My opinion was that it started out nicely and then went downhill fast, particularly as I began to grow weary of all the descriptions of the overpriced decorative items that the heroine purchased for her client. Maybe the concept of investing major dollar value in a cast-iron pot to hold flowers on a porch or spending thousands just for one small piece of furniture goes too much against my grain. Hissy Fit just didn't do it for me.

So, I opened up Savannah Blues a bit hesitantly. Again, the story had a fantastic beginning and the pages flew . . . for a while. After a time, that same sensation of being bored out of my mind swept over me. It wasn't a bad book; the writing was pretty decent. So, what exactly turned me off? Well, now that I think about it, there were quite a few things that bugged me. One was that the emotions of the characters didn't always fit the situation, in my personal humble opinion. To name characters in specific examples might spoil some surprises for those who enjoy her books, so I won't mention any of them by name, but when one character is arrested it sure doesn't seem to bother the person all that much. In fact, that character is much more disturbed by what people think than by the threat of being hauled off to prison for a very long time. Weird.

In addition to the emotional issues - and I've only provided one example; there were several occasions in which characters flew off the handle for reasons beyond my understanding - it seemed to me that the author had trouble focusing and the storyline went all over the place. I completely failed several attempts to synopsize the story because it simply went in too many directions.

On the positive side, Andrews' knows the South. Her skill lies in her ability to describe life in a small, Southern town. The mode of speech, mannerisms, what people are interested in and talk about, that strange sense of isolation from the rest of the world, the heat, humidity and profuse wildlife . . . her descriptions are dead-on. Maybe that's part of the problem. I get enough of life in the South, as is, and would much rather read a novel set someplace cold, someplace I'd rather be, myself, like London or Seattle. The last thing I want to read about while sweat is running rivers down my back as I wait in the heat for my son in a parking lot is . . . heat. Not to mention the fact that the heroine in Savannah Blues is one of those annoying people who will willingly barrel over you or grab something the moment you set it down at a yard sale. Yuck. Since I'm one of those people who has considered putting, "Early birds will be shot," in my garage-sale notices, in the vain hope that people would just wait till I opened the darned door in the morning, it's obvious they grate my nerves. I didn't like the heroine. Come to think of it, the hero was way too temperamental for me. The only character I really liked was the heroine's best friend.

So, there you have it. If you like Southern fiction in the Chick Lit vein, this book is probably for you. Savannah Blues just wasn't my thing.
Posted by Bookfool at 9:47 PM