A Wednesday Wahoo! and a little tribute

This fellow is a Colorado hummingbird. Colorado is seriously overflowing with an unfair quantity of wahoos. Except, it's also a great place to get a nosebleed, so we'll forgive them for hogging the pretties. 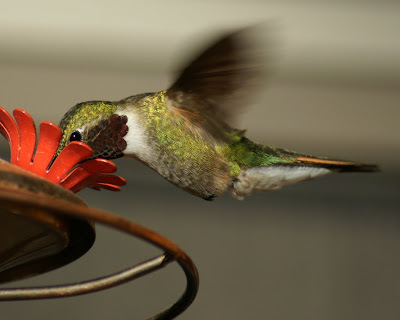 Today was a day that I planned to pay tribute to my father but in the fashion of the studied airhead, I managed to set up a book tour and didn't bother to dig for a photo so the hummingbird and a slightly late tribute will have to suffice. Most of the photos are in my sister's house, anyway. It would have been a stretch. But, I have to make note of today, the 20th anniversary of my father's death. I had a super cool dad. My biggest fear, after his unexpected death, was that I'd forget him -- his face, his laugh, his effervescence. He was the most deliberately joyful person I've ever met.

I haven't forgotten a thing. And, I haven't stopped missing him. He and his father were avid amateur photographers and I know he would have loved that hummingbird photo. He would have loved my youngest son, whom he never met. Truly, he just loved everyone. When he died, my friends told me they adored him because he was so welcoming and they loved the way he banged in and out of the house, whistling.

I was cooling down after a run around the high school track in my hometown, just after my father died when a total stranger struck up a conversation with me. They're really friendly in my hometown. The man told me about a time he was late for lunch at Wendy's and his wife was stuck waiting because he had the money and she had none. My father observed her distress and offered to buy her lunch. She declined, but apparently Dad's spontaneous generosity deeply touched that man. That's the kind of guy my father was.

My dad was also an avid reader. He loved history and thrillers. We shared a love of Dave Barry. For some reason I'll never understand, my mother thought I was going to imitate my greedy uncle (who had stripped my grandmother's house of many of her valuables in the middle of the night, after her death) so she told me, "Don't take anything!" after the funeral. I stole my dad's copy of The Hunt for Red October because my soul was so wounded at his death that I had to take something home -- just some small token of the dad I loved. Everyone in the house has read it but me. Maybe it's just too precious; I don't know. I figured it was one low-value item my mother wouldn't miss and she didn't, although she recognized it when she came for a visit and saw it on my shelf. I told her it was his and she just nodded. By then, she was over the sharp pain of new widowhood.

He would have been 82 if he'd lived. My parents struggled to conceive, so my father was an "older" parent by Sixties standards. By today's standards, he'd probably have been considered reasonably young. He always looked 10 years younger than he was, so nobody knew the difference. We had a lot of doddering old relatives when I was young and I mistakenly assumed that my father would live to a ripe, old age. I was looking forward to watching him turn old and gray.

My dad loved to travel. He was a Navy corpsman during the final weeks of WWII in the Pacific and then was called up, again, during the Korean War. My parents met when he narrated a slide show of his war photos at church in Lincoln, Nebraska and she went up to ask him a few questions, after he finished. They were kind of goofy lovebirds till he died; they took long walks together and held hands. He would sneak up behind her in the kitchen and wrap his arms around her, which always made my mother jump. He left a horrible empty space in her life.

Estes Park, Colorado was his favorite place on the planet, so a Colorado hummingbird seems apropos for this tribute.

I miss you, Dad. You were my hero. You still are.