For the King's Favor by Elizabeth Chadwick 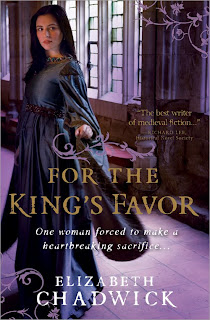 In the 12th Century, Ida de Tosney is presented at court. Shy, lovely and innocent, Ida hopes King Henry II will grant her a decent marriage. Instead, she catches Henry's eye and becomes, to her horror, his new mistress.

Roger Bigod's father, Hugh, is a nasty man, bent on picking his son to pieces. As Roger's father and his army of Flemish mercenaries prepare an attempt to oust King Henry from the throne, Roger decides he has had enough and leaves, fighting instead in defense of the king. But, after Hugh Bigod's loss, his earldom is stripped from him and his castle's defenses torn down. That earldom and the lands are Roger's inheritance.

Upon Hugh's death, Roger is left with a dilemma. His stepmother and her two sons dispute the lands and the title that is legally Roger's by birth. And, his participation in one battle may not be enough to convince the king to rule in his favor.

When Roger arrives at King Henry's court intending to settle the dispute, young Ida catches his eye. Ida is equally captured by Roger's respectful manner and dashing looks. When the king's interest fades, she sees a chance to escape an unhappy life as the victim to Henry's whims by marrying Roger. But, leaving Henry will lead to the hardest sacrifice of her life. Will Roger ever succeed in regaining the lands and title that are justly his? And, will Ida and Roger be happy in spite of the loss that continues to tear at her heart?

Well . . . I'm not going to spoil it for you, but here's the thing you probably most want to know about For the King's Favor: I could not put this book down. Both Ida and Roger are likable characters, flawed in their own ways but honorable, loyal and kind. Their tale is a fictionalized account of real-life characters the author came across while researching her two books about William Marshal. I've read the first Marshal book and have a copy of the second, but it's been a while since I read The Greatest Knight and it took me a bit to realize that was the same William Marshal dropping in and out of the story. Then, I realized I was reading about many of the same events from a slightly different angle.

Oh, how I loved reading the same story from a different viewpoint. As I've mentioned many times, I'm not well educated in history and for that reason, I love reading accurate, well-researched historical fiction from which I can learn. Chadwick is, in my opinion, very much like Georgette Heyer in her painstaking research, in this case of Medieval England, as well as her sometimes-baffling detail (again, a lexicon is a very fine thing). In the author's notes, she admits to altering a few details as as she learned more in her research, but primarily by way of a change in the timeline and not by a large number of years. The shift wasn't enough to cause confusion and you have to appreciate an author who is so dedicated to accuracy.

Highly recommended. I absolutely loved For the King's Favor. Like Heyer, Chadwick has already written a large number of books and that means many years of excellent Medieval reading to come. Wahoo!

I am fighting a lingering migraine and computer issues. It's apparently time to upgrade my computer; but, since I had a really good time this summer, I'll have to wait. There are days that my computer is so sluggish it's like being on dial-up, all over again. Hopefully, I'll be able to hold out until I've finished paying for my vacation fun. Fingers crossed.

Things Isabel has done, this week:

Chewed an earphone cord into two useless pieces, learned to occasionally show tender affection to her big sister Fiona (I took some touching photos of Isabel sharing a windowsill with Fi, touching one of Fi's paws with both of hers, but missed the moment when Izzy reached up to bat Fi's whiskers and Fi didn't even flinch), chomped a window-blind pull into 4 worthless chunks, convinced a Bookfool that maybe declawing is worth remote consideration, and swung from a chair cushion after a failed leap onto a breakfast-nook chair. Said Kiddo, after rescuing her: "I wish I had that on video."

Best news for us:

Our first real cool front has arrived!!! Wheeee! Time to party!! I'm off to drink cider on the porch with hubby and enjoy the air. Happy Autumn!

©2010 Nancy Horner. All rights reserved. If you are not reading this post at Bookfoolery and Babble, you are reading a stolen feed. Email bookfoolery@gmail.com for written permission to reproduce text or photos.
Posted by Bookfool at 6:54 PM