Why We Fight, edited by Simon Van Booy and some nifty timing 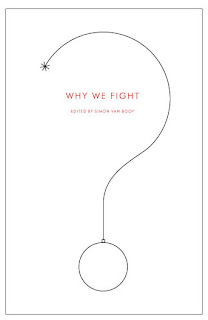 I believe that philosophy is a subject we have a natural gift for, but a subject often regarded as one with no practical value--and closed to anyone outside the walls of universities. I am committed to the idea that these central questions of life are part of our everyday lives--that we all possess the skill and agility to tackle them, and that by pondering them, we can experience more fulfillment in our relationships, in our work, and in how we view ourselves.

Inside these books are readings, poems, quotations, and visual images that will inspire you to continue exploring the subject for years to come. I have tried my best to present philosophical ideas with no immediate resolution as immediately accessible for everyday thinking.

The material in Why We Fight is an interesting collection that explores why humans argue, bicker, go to war and in other ways battle with each other. I chose to read Why We Fight first of the three books in the series -- which includes Why Our Decisions Don't Matter and Why We Need Love -- because it was the one that interested me the least and I wanted to save the best for last. That makes me chuckle, now, because I found Why We Fight absolutely fascinating and thought-provoking.

. . . an etiological story that explores the nature of an aggressive biblical tribe called the Kenites. However, for most people it's a story about murder, crime, punishment, envy, and sibling rivalry--all major themes in ancient literature.

In many ancient stories and myths, people fight because of excessive pride--an emotion that often arises after the experience of rejection.

I've read the story of Cain and Abel dozens of times and loved the way Simon deftly captured both the history and the context of the story in a minimum of words, as he did in all of his introductory descriptions. I've been taking my time reading these philosophy books (I'm currently in the middle of Why Our Decisions Don't Matter) and finding it fascinating how the reading seems to parallel my thought processes along with some of my other reading material and even a photograph viewed this week. I'll provide a link to the photo and explain why the reading folded nicely into my thoughts about the photo when I review Why Our Decisions Don't Matter. It has to do with Hamlet. And, stars. But, back to the subject . . .

Two of the articles in Why We Fight particularly grabbed my attention because the first article, written by an animal psychologist and zoologist, describes human aggression as no different from that of other animals while the second article flatly disputes the concept of inherited tendency to defend our territory. Are we territorial by nature or not? Therein lies the joy of this book and the entire series: food for thought, discussion and to tempt one to further reading.

Love it, love it, highly recommended. There were 2 readings that literally put me to sleep but I did finish them and I think we can at least partially blame fatigue.

And, lest you think, "For crying out loud, everything's been 'highly recommended', lately," I must tell you that's because of that slumpy business I went through during the summer. I've only been reading books that totally grab me and suck me in. Anything that doesn't capture my interest and keep it is still getting set aside. Hopefully, I will soon find the time to share a little about some Did Not Finish books; and, I do plan to review one children's book I didn't like, soon. But, it's not the one in the sidebar. The little chimp book is another one I loved. You'll see.

The Coffin Quilt by Ann Rinaldi is a book that I consider one of those serendipitous reading choices that closely aligned with the thought process in Why We Fight, although I didn't think about the parallel when I picked The Coffin Quilt up to read.

The Coffin Quilt is a fictionalized account of the feud between the Hatfield and McCoy families -- a vicious, bloody feud that began with the theft of the McCoys' pigs in 1878. Ha! Territorial fighting, right? The pigs were a valuable and crucial possession because every part of the pig was used for either food or some other important need, such as soap-making. After the McCoys lost their pigs in a court battle (because some Hatfields were involved in the legal doings and they stuck with their kin, no matter what), the feud exploded into all-out war with ruthless killings after beautiful Roseanna McCoy ran off with Johnse Hatfield and the Hatfield patriarch refused to allow them to marry, destroying Roseanna's reputation.

The Coffin Quilt is told from the perspective of Fanny McCoy, the youngest daughter, and it is by far the best book I've read by Ann Rinaldi. I'm going to quote from the cover blurb (no spoiler included):

As the killings, abductions, raids and heartbreak escalate bitterly and senselessly, Fanny, the sole voice of reason, realizes that she is powerless to stop the fighting and must learn to rise above the petty natures of her family and neighbors and find her own way out of the hatred.

There's a lot of senseless violence, but the novel is a young adult and not too awfully graphic. I wouldn't be surprised if someone, somewhere thought it was worth banning (ha!--got in my comment about Banned Books Week!) but I thought it was well-written and, judging from the author's notes, meticulously researched, the perspective and fictionalized portions chosen with logic and insight.

The Coffin Quilt definitely provided more food for thought on the concept of why humans fight and I also recommend it as a good read with one caveat: The book is written entirely in vernacular. In general, I avoid books that are written in a regional dialect but I've lived in the South long enough that I had no problem understanding the mode of speech. I would advise flipping through The Coffin Quilt or reading an excerpt before purchasing, though, if you dislike books written in that particular style.

Why We Fight, edited by Simon Van Booy - Philosophical readings, both fiction and non-fiction, and other material -- highly recommended to both the higher-minded and those who think they're too dim to handle philosophy. I think those of you with slow cogs like mine will be pleasantly surprised at the readability.

The Coffin Quilt by Ann Rinaldi - Solid young-adult fiction based on the real-life feud between two families, recommended for both youngsters and adults with the caution that it's written in Southern dialect.

It took me all evening to write this post, partly because the kitties are kind of needy and getting into a heap of trouble. There have been some fluffed-up tails, banging noises and other bits of excitement. Hope you enjoyed it and that you had a very wahooey Wednesday!

©2010 Nancy Horner. All rights reserved. If you are not reading this post at Bookfoolery and Babble, you are reading a stolen feed. Email bookfoolery@gmail.com for written permission to reproduce text or photos.
Posted by Bookfool at 9:00 PM