Whisper on the Wind by Maureen Lang (review) 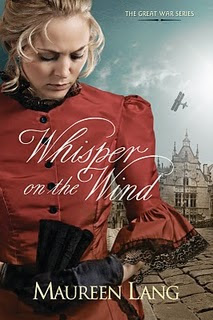 WARNING: This review may contain spoilers!!! Stop right here if you plan to read this book right away!!!

The year is 1916. Belgium is under German occupation and Isa Lassone is doing something very unusual -- sneaking into Belgium in order to try to save the family she used to live with and came to think of as her own. But, it's not as easy as she hoped.

Edward, a young man she has loved since she was 7 years old, is working with other Belgians to keep up morale among his countrymen by helping to print and distribute La Libre Belgique (Free Belgium), a newspaper to keep Belgians notified of the real, uncensored news and lift their spirits.

Edward refuses to leave the country but encourages her to help his family leave. However, Isa cannot bear the idea of leaving without him. So, they all remain and Isa moves into her old home -- with a German officer billeted in one of the large home's bedrooms. When a new location is needed for a printing press, Isa offers up a secret room in her cellar. But, in doing so, she risks not only her own life but the lives of the people she loves most. Only her faith in God keeps her going during the most dangerous times.

Will Isa, Edward and his family survive the German occupation? Or will they die trying to do their part to keep hope alive?

First things first: I spent all day reading Whisper on the Wind. That's partly because I'm a slow reader (le sigh) and partly because I couldn't put that sucker down. It has its flaws. At times I thought, "Seriously? I don't buy that," but then I realized I kept sticking poor Isa mentally into the wrong time period. I've read very, very little about World War I and have no idea what German security was like in that time and place. So, it's possible that Isa may have gotten away with a few squeaks past the Nazis as she entered the country.

My general feeling about the printing press in her cellar (which I don't believe is a spoiler, but I've gone ahead and added the spoiler warning, just in case some might consider it to be) was that it was crazy but insisting that she must move back into her own home in an occupied country, knowing at least one Nazi was billeted there, was just ridiculous. I just had a terrible time getting past that.

Otherwise, I loved the book. I've mentioned before that I read My Sister Dilly by Maureen Lang and enjoyed it. This was an opportunity to read something vastly different (historical versus contemporary) and I found that I liked her writing as well as I did the first time. At the beginning, there are some tense moments but they're nothing compared to the danger that occurs later in the book. In that regard, I found it very realistic -- the further they became entrenched in their work and the more strangers they encountered, the more dangerous their situation became.

While the premise is a bit over-the-top and there are moments and situations that I had trouble swallowing, Whisper on the Wind is absolutely engrossing and I highly recommend it, especially to fans of Christian historical fiction. Danger, intrigue, tension, romance (not gushy or overdone, but one of many elements) and a satisfying conclusion make for a page-turning read.

Whisper on the Wind is apparently the second in Lang's "The Great War Series", although it's a stand-alone and there was no hint that it's the second book in a series. I only found out it was not the first book in the series when I saw an excerpt from the third book in the back.

I'm going back to that make-no-promises rule I had, a while back. I would really, really like to whip out a bunch of reviews, this week, but can't make any guarantees because I never know from one day to the next if the words will come. Obviously, no problem tonight. Maybe doing nothing but read and play with cats is a good way to prepare to write. ;)

Over the weekend, I finished Georgette Heyer's Regency World by Jennifer Kloester. I'd like to review that next, while it's fresh in my mind. But, I'd also like to run a 10K, again. I'd like world peace. Just wish me luck, okay?

A new book has arrived at my home, today: Homer's Odyssey by Gwen Cooper. A kitty book!! Wahoo! I also got a copy of Only the Good Spy Young by Ally Carter (4th in the Gallagher Girls series, which Kiddo and I love). Both were from Paperback Swap.

And, Sterling Kids sent me 4 books from their new "Inside" series: Inside Dinosaurs, Inside Hurricanes, Inside the Human Body and Inside Tornadoes. I'm a weather freak, so I read Inside Hurricanes immediately and I'll go for Tornadoes, next. I haven't decided whether I'll review them as a group or individually -- that will depend on whether I find them consistent. I really liked Hurricanes, apart from one little quibble that is not unique -- it's in every single freaking book that mentions Hurricane Katrina and you can probably guess what that is because I can't shut up about it.

Best news of the week: I have caught the two kitties sleeping within 18 inches of each other twice!!!! How exciting is that? Fiona's still more skittish than normal and Isabel chews on things she shouldn't, climbs curtains (eeks -- we hardly have any curtains but she's found them!) and frequently provokes Fiona . . . and sometimes Fiona bats her for no other reason than, "That is MY toy and I don't want you touching it," but, hey, we'll take any progress at all.

©2010 Nancy Horner. All rights reserved. If you are not reading this post at Bookfoolery and Babble, you are reading a stolen feed. Email bookfoolery@gmail.com for written permission to reproduce text or photos.
Posted by Bookfool at 9:54 PM