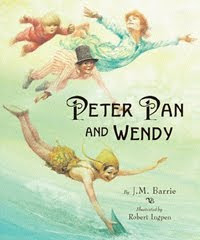 I could gush all day about the illustrations in this edition of Peter Pan and Wendy, but let's start out by talking about the story. Everyone has heard of Peter Pan, right? Of course you have. I've intended to read this children's classic for quite some time, but simply hadn't gotten around to doing so. Thanks to Sterling Kids, I got the nudge I needed when they sent me a copy of this stunning edition that celebrates the upcoming 100th anniversary of the novel.

When Peter Pan flies into the window of the Darling children's nursery, Mrs. Darling slams the window and traps Peter's shadow. She means to tell Mr. Darling, but the subject frightens her just a bit; and, before she has a chance, Peter returns for his shadow and her children fly away with him to Neverland. Neverland is an adventurous world where a half-dozen Lost Boys look to Peter as their leader, a magical place of fairies, mermaids, pirates and redskins. When Wendy becomes the mother to the Lost Boys, Tinkerbell is envious and stirs up trouble. Meanwhile, the notorious Captain Hook intends to get his revenge, once and for all, on Peter for lopping off his hand. Will Wendy's presence weaken Peter's resolve? Or, is Peter simply too cocky for his own good?

Anyone who has seen the movie knows the general storyline but there is so much more to this book that I'm actually concerned that mentioning those little bits that make it special would ruin it for those who haven't read the classic. I'm glad I didn't know too much going into the book. There are plenty of surprises. For one thing, I had no idea the oft-repeated words "astonishing splashes of colour" came from Peter Pan and Wendy. And I didn't pay much attention to the fact that the children's nurse was a dog. Nana's part in the story was really quite funny.

I was also unaware that the full title of the story is Peter Pan and Wendy and that Wendy had such a prominent role. In fact, Wendy is lured to Neverland by promises that she can mend the Lost Boys' socks and do other household chores. When I wrote my review of the book at Goodreads, I skimmed a few other reviews and found that some people consider the book "sexist" or offensive. It did bother me a bit, at first, that Wendy's sole purpose was to play the mother and do all the work keeping house, but then it occurred to me that little girls at least used to pretend to do just that. I "played house", pretending to feed and tend my "babies", sewing little outfits for my dolls and bathing them in the sink. Maybe little girls don't do that anymore, but if nothing else the story was certainly a product of its time.

The biggest surprise to me was that the real book is dramatically different from and much, much better than the Disneyfied version. Peter Pan was never one of my favorite Disney movies, I must confess, and I'm still not fond of the idea of a little boy who refuses to grow up. But, you simply cannot beat the beautiful language of the classic and the surreal, wacky world. I definitely wasn't expecting an Alice-in-Wonderland-like, sometimes nonsensical story; although, who knows what I expected. Perhaps a more straightforward storyline, a bit magical but without that strange cross between dream and reality. I was also surprised by the violence, but being a person who avoids violence in books and movies, I suppose I'm always caught off-guard when there's a bit more than expected.

A side note: I began reading the book at home and then read part of the book on my husband's iPad on the plane flight to London. When I switched to the iPad version, I desperately missed the beautiful illustrations. I hardly read a word while we were in London, which was great because Robert Ingpen's illustrations are fabulous and I was happy to finish up by reading the book with the pretty pictures.

The bottom line: A fun, beautifully written and somewhat surreal classic. I particularly recommend this edition for collecting or gift-giving (or, if you're a sick puppy like me, unwarranted self-indulgence). Some may find either the violence or Wendy's role as mother to the Lost Boys upsetting. I found both a little jarring but the adventurous storyline captured me and I pretty much smiled through the reading of the book. It's really charming in many ways.

Mushy, gushy thanks to Derry and Sterling Children's Books for the surprise review copy!

My life is currently completely dominated by two kitties duking it out. Argh. I truly had no idea what I was getting into with Isabel. Behind that cute little face is a surprising streak of terror. We have some discipline work to do. Fiona is still a bit miffed but she is definitely the calmer of the two girls. She really is my ideal cat, personality-wise, so it's been rough seeing that vaguely sad glance Fi gives me when Isabel dominates playtime. Sometimes, I have to put Izzy in "her" room (the utility room) to give poor Fiona a break. But, I do think they'll eventually adapt if Fiona doesn't let Isabel beat up on her. She is an awfully mild-mannered little sweetheart, my Fi.

Speaking of the little hellion: Izzy is very curious about the camera. 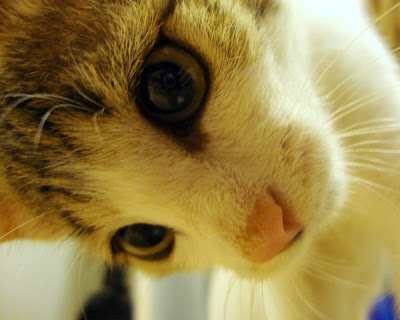 Fiona Friday will not be forgotten, but it might be posted a tad late. Happy Reading!

©2010 Nancy Horner. All rights reserved. If you are not reading this post at Bookfoolery and Babble, you are reading a stolen feed. Email bookfoolery@gmail.com for written permission to reproduce text or photos.
Posted by Bookfool at 11:47 AM