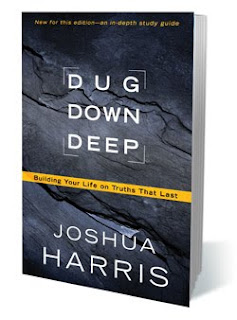 Dug Down Deep by Joshua Harris
Copyright 2010/2011
Multnomah Books - Christian Living
271 pages, incl. Recommended Reading
Did Not Finish
I'll let the author tell you a little about what Dug Down Deep is, in his own words:
This book is the story of how I first glimpsed the beauty of Christian theology. These pages hold the journal entries of my own spiritual journey -- a journey that led to the realization that sound doctrine is at the center of loving Jesus with passion and authenticity. I want to share how I learned that orthodoxy isn't just for old men but is for anyone who longs to behold a God who is bigger and more real and glorious than the human mind can imagine.
--p. 16 of Dug Down Deep
I've wanted to read Dug Down Deep since it came out in 2010, but I'm not even certain why. I think I must have read something that said it's about digging down deep to build a firmer foundation so that you will be a stronger Christian (which is always my goal), and the title makes it clear that's the theme. But, it's not quite what I expected.
Author Joshua Harris starts off the book by discussing his early years as a Christian, which he entitled, "My Rumspringa". I wasn't familiar with the term "rumspringa" but it is an Amish term for a time of teen life that sounds like a complete horror to me. When Amish youngsters reach a particular age (I didn't mark it, so I can't remember if it's 18 or 21), they're allowed to run wild, drink, have sex, do drugs, wear non-Amish clothing, go to movies, etc. Basically, they're given a time to experience the outside world, apparently to help them decide whether or not they want to continue to live in the Amish world. I won't go into detail about that; the author talks about it quite a bit.
As a parallel, Harris tells about the years during which, for him, "the Christian faith was more about a set of moral standards than belief and trust in Jesus Christ." He talks about the way youth groups and church services have been redesigned to be fun and draw people in, but he felt like there was little teaching about Jesus, at least when he was a youngster.
Then he goes into his own study of theology and the growing process involved. I thought it was quite interesting how Harris transitioned from a young fellow who quickly became successful as a public speaker -- he confesses to knowing now that there wasn't a lot of depth to his understanding of God and Christianity -- to a man who was mentored and studied deeply in order to develop the depth necessary to be a leader.
Here's where Harris lost me . . . and it's unfortunate that it was quite early in the book . . . his definition of doctrine is not at all what I've been taught and I simply could not figure out how to reconcile his definition to the one I was (possibly wrongly) taught. I was taught that doctrine is the philosophies that are different from one church to another, such as the decision not to use musical instruments in one church while another church may actually even have its own band, in addition to the usual piano and/or organ accompaniment. Or, say, the difference between types of baptism or wine versus grape juice for communion.
Harris describes a definition by J. Gresham Machen: "Doctrine is the setting forth of what Jesus has done along with the meaning of the event for us." That, I was okay with because what Machen says indicates to me that the "meaning" can be translated in different ways. But, then Harris describes it in his own words: "Doctrine is the meaning of the story God is writing in the world. It's the explanation of what he's done and why he's done it and why it matters to you and me."
Ack. That is so completely different, much more personal. I continued to read to about page 53 and then, in the end, I decided to set the book aside for a while and ponder it. I need to figure out how to change my mental process before I can really move on with his mode of thought.
The bottom line:
Theology is rough. I think Joshua Harris is a very straightforward, humble and pretty entertaining writer. But I had so much difficulty with his definition of "doctrine" that I opted to set it aside, for now. This new edition includes an "in-depth study guide" and I'm hoping that will help me figure it out. But, I need to give what I've read, so far, a little space and time to sink in.
Here is a free chapter of Dug Down Deep. Apologies to the publisher for the late link. I was in transit and the chapter wasn't available before I left for vacation. It may be a couple days before I'm back to regular posting. I'll fill you in when I've recovered. It's been a long day.
In case you've been missing Fiona Friday, here's a photo I get a kick out of: 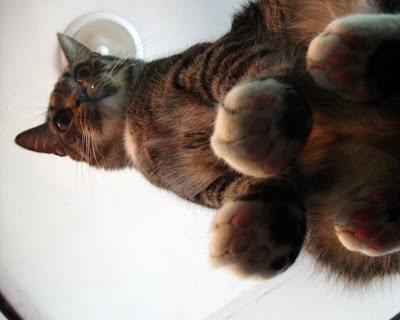 I snapped this shot of Fi on our glass breakfast table just after I started my blogging break. It makes me smile.
Hope everyone's had a fantastic June!
©2011 Nancy Horner. All rights reserved. If you are reading this post at a site other than Bookfoolery and Babble or its RSS feed, you are reading a stolen feed. Email bookfoolery@gmail.com for written permission to reproduce text or photos.
Posted by Bookfool at 6:00 AM