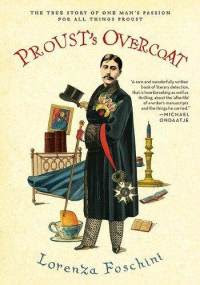 Proust's Overcoat: The True Story of One Man's Passion for All Things Proust
By Lorenza Foschini
Copyright 2009
Ecco - Nonfiction
144 pages
Prominent Parisian Jacques Guerin headed his family's perfume company, but his true passion was collecting literary treasures. One of his favorite authors was Marcel Proust; and, when Guerin became a patient of Proust's brother, Robert, he sought to know Dr. Proust better, eventually finding out that the doctor owned many of his brother Marcel's possessions, including manuscripts, furniture and the coat Proust was known to seldom remove, even in bed.
A bit of an opportunist, Guerin hoped to eventually obtain some of the author's possessions. Proust's Overcoat tells the story of how a wealthy businessman came to collect not only the coat and some manuscripts, but many other items that belonged to Proust and how, after wheedling and finagling to obtain them, he kept his treasures out of other hands.
Proust's Overcoat is an elegant little snack of a book. I read it in a few hours, one evening, and enjoyed it very much. It has a mysterious feel as the author tells about Guerin's sneaky ability to get people to sell things to him. Since Proust was gay and so was the treasure-hunting perfumer, there's a lot of talk about homosexuality. It's been nearly two weeks since I read the book, but I'm pretty sure the objective of mentioning the various characters' sexual orientation was to describe how they were shunned or even removed from certain society and that led, in particular, to enmity between Proust and his sister-in-law, who burned valuable documents before realizing they had any monetary worth.
The bottom line: A marvelous, engrossing true tale about a treasure hunter and how he came to own many items belonging to Proust and other worthies of the literary world, well-written and very entertaining. Recommended.
Cover thoughts: I love the cover showing the eccentric author surrounded by (and wearing) his possessions. I think it's rather charming.
Side effects: Naturally, now I'm dying to read some Proust. I have never read anything at all by the author, although I've pondered his master work and been put off by the sheer size of it. Houses could be built out of copies of In Search for Lost Time. Incidentally, I had no idea the original title, Remembrance of Things Past, had been changed to In Search of Lost Time until I read Proust's Overcoat.
In other news: I just realized I haven't even bothered to work on editing my photos of Charleston, lately, which convinced me I should dash off to see if I could find anything worth playing with and I came up with this photo, which was taken next to one of the waterfront fountains: 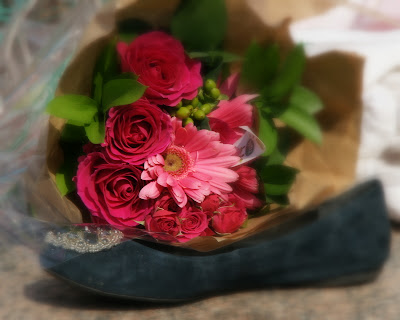 ©2011 Nancy Horner. All rights reserved. If you are reading this post at a site other than Bookfoolery and Babble or its RSS feed, you are reading a stolen feed. Email bookfoolery@gmail.com for written permission to reproduce text or photos.
Posted by Bookfool at 2:13 PM