Before the Poison by Peter Robinson 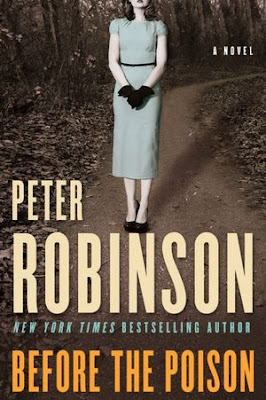 Title: Before the Poison by Peter Robinson
Copyright: 2012
Published By: William Morrow - Mystery/Suspense
Length: 358 pages
Reason for Reading: Intriguing premise. Also, I admit the cover sucked me in. I like that cover.
Brief Summary: Chris Lowndes moves from California back to his native England after the death of his wife. After finding out that his new home was held in trust for many years, he becomes curious about its previous owners and why the house was unoccupied for such a long time. When he finds out that former owner Grace Fox allegedly poisoned her husband and was hanged for murder in 1953 then thinks he has seen a woman in the mirror of the room opposite the one he's using, Chris begins to investigate. What kind of person was Grace? How was her trial conducted? What were the circumstances surrounding the event? Was she really guilty of murder?
What I liked about Before the Poison:
Pretty much everything. The questions Chris asks pulled me in and kept the pages turning. You find out early on that Grace had an affair with a younger man, but it's also clear that she was respected and considered a kind, caring person. The book begins by alternating between excerpts about Grace's trial from a book written not too long after Grace's death called Famous Trials and the story of Chris moving into the house, finding out about Grace and then investigating.
Eventually, the investigation is alternated with excerpts from the journal Grace kept during the war years, when she served as a Queen Alexandra's nurse in the the Pacific during WWII. Because the bits in which the protagonist is investigating move rather slowly, the interruptions with excerpts from book and journal broke up the narrative nicely and added a lot of color to the storyline. I have never read anything by Peter Robinson, but it was clear to me that he's an experienced writer. His writing is mature, well-paced and cogent. I absolutely loved the conclusion.
The book mostly takes place in the Yorkshire Dales and I've marked a few things to take notes on because that's an area I'd like to visit, someday. Chris does a little visiting of ancient buildings and also takes guests on a tour to places of interest. If you're thinking about traveling to Yorkshire or have been there, you might enjoy the book for those little tidbits.
What I disliked about Before the Poison:
Nothing, really. The pacing is a little slow, but it works. I anticipated slightly more suspense but I was not disappointed.
Notes on the Category:
I tend to avoid mysteries because I went through a mystery phase that lasted quite a while and I completely burned myself out, so Before the Poison is an unusual read for me. If you're not normally a mystery reader but like to toss one into the mix for a change of pace, now and then, Before the Poison is a good one. I particularly enjoyed reading the fictional Grace's WWII journal as it reveals a great deal about her and I love reading anything and everything set during WWII.
Recommendation:
4.5/5 - Highly recommended to mystery/suspense fans and anyone else looking for a very good read. I took off half a point for the unexpectedly slow pace, but I found Before the Poison unusually satisfying.
There was one line I didn't understand. When Chris asked a man named Wilf what happened to Grace's son and finds out he emigrated to Australia, Chris says, "When would this have been?" Wilf's answer was "Late fifties. Ten Pound Poms." I had to look that up.
Ten Pound Poms is, according to Wikipedia, "a colloquial term used in Australia to describe British subjects who migrated to Australia after the Second World War under an assisted passage scheme established and operated by the government of Australia." Interesting.
And another vocabulary word, which is obvious in context but still worth noting:
escritoire - A small writing desk with drawers and compartments.
Sentence: "She used it for sewing and reading and getting away from her husband for a bit of peace and quiet, and she had a lovely antique rolltop walnut escritoire where she used to sit and write her letters."
Kind of a run-on sentence, actually. But, I promise you the book is well-written. I'm pre-posting this as a storm is rolling in, so I'll have to skip adding any fun stuff (flower or cat pics, lists of books that have recently arrived) and save that for another day.
©2012 Nancy Horner. All rights reserved. If you are reading this post at a site other than Bookfoolery and Babble or its RSS feed, you are reading a stolen feed. Email bookfoolery@gmail.com for written permission to reproduce text or photos.
Posted by Bookfool at 6:32 AM