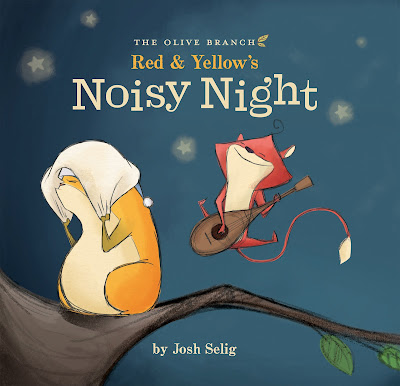 Title: The Olive Branch: Red & Yellow's Noisy Night by Josh Selig
Copyright: 2012
Published By: Sterling Children's Books (Ages 4 - 7)
Length: 24 pages
Reason for Reading: Because I'm crazy about children's picture books and Katie at Sterling Children's asked if I'd like to review.
Release Date: April 2012
Brief Summary: Red and Yellow live in the branches of an olive tree. When Yellow's sleep is disturbed by Red playing his strummy, they must find a way to compromise.
Yellow was upset.
"Stop playing your strummy so I can sleep!" said Yellow.
Red was also upset.
"Stop trying to sleep so I can play my strummy!" said Red.
They weren't getting anywhere.
Any mother with more than one child has been there. Two little ones, one is restless and the other is dead tired. Red & Yellow's Noisy Night is perfect for times when children need a reminder of how to get along.
Red began playing
a quieter tune on
his strummy.
Yellow liked it.
Red liked it too.
Then they both had a wonderful idea,
which happens sometimes.
Red played his strummy very sweetly for Yellow. The sounds of
Red's strummy helped Yellow
fall
asleep.
And everything was good in the Olive Tree again.
As you can see from the excerpt, the storyline in Red & Yellow's Noisy Night is extremely simplistic, probably best for children at the younger end of the spectrum. I'd say it's short enough that Red & Yellow's Noisy Night could easily be read to a 2-year-old. The illustrations are expressive and also quite simple. Red and Yellow are always shown in their olive tree, trying to get along. Sometimes there's a blue sky behind them, sometimes stars. Although Red initially comes up with the idea to play his strummy quietly after listening to the quiet of the night, I like the fact that they resolve their conflict together.
I received my copy of Red & Yellow's Noisy Night for review from Sterling, so I've got a publicity sheet that says the book is based on an animated series. I don't watch much TV, so that's news to me.
Red & Yellow's Noisy Night will be released in April and Sterling Children's Books will also release Red and Yellow plush toys. I skimmed over the material and didn't realize there were going to be toys to go with the book or I'd have asked for a photo. At this point, I can't find any photos of the toys online, but I'll see if I can get my mitts on a picture to share. I know my kids and I would have had fun acting out the story with stuffed critters. I spent at least a dozen years of my life on the floor reading and playing with my two. No wonder my knees are going.
Recommendation:
Recommended for children as young as 2 (if they're past the book-shredding stage) and teachers of little ones. Although the book says it's for ages 4-7, I think any small child from about age 2 and up will probably enjoy Red & Yellow's Noisy Night, but I particularly recommend it to parents of more than one child, those who are trying to teach their child to get along with others at preschool/kindergarten and teachers of very young children.
Whenever I review a picture book, I like to find the best possible home for it to go to after I've reviewed and right now it's a toss-up between a friend who is expecting her 4th child and another friend who teaches preschool. Both are in my Bible study class, so I may take it along to this evening's class and see who shows up.
Update for the curious: My copy of Red & Yellow's Noisy Night was claimed by a preschool teacher -- not the one I was thinking of, but another (there are a lot of teachers in my group). She read it, laughed at the cute characters and seemed thrilled to take the book off my hands.
©2012 Nancy Horner. All rights reserved. If you are reading this post at a site other than Bookfoolery and Babble or its RSS feed, you are reading a stolen feed. Email bookfoolery@gmail.com for written permission to reproduce text or photos.
Posted by Bookfool at 3:22 PM