Monday Malarkey - Our lives in boxes and a mini-review of Robopocalypse by Daniel H. Wilson 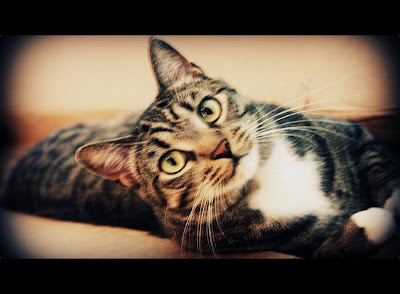 This is a terrible photo but I thought it was just so darned cute. Fiona is in a box full of flattened boxes, in the photo above. She thinks it's her throne-slash-scratching-pad-deluxe.
I'm spending most of my days packing, now, but the usual things are still happening. I'm reading, of course, just sloooowly. After last week's Children's Day fun (reading four books in a single day with breaks to write about them is like permission to regress: awesome), I finished one book over the weekend. We'll get to that in a minute because, speaking of Children's Day, look at this very cool photo of a soldier reading I Need My Monster to his child via Skype! I Need My Monster was my favorite of the books I reviewed, last week.
Back to the book I finished over the weekend:

Robopocalypse by Daniel H. Wilson is so action-packed that it's clear why the movie rights were sold before the book had even been released (to be directed by Steven Spielberg). The story of a worldwide robot war told in retrospect and how the humans overcame the odds, Robopocalypse is narrated by one of the people who went on a mission to save the world from the evil computer Archos. By narrated, I mean the same person introduces each chapter and occasionally a chapter is written from his perspective, but it's also told using the voices of several characters who survived the robot wars as well as presumed viewpoints of some of the dead whose accounts can be described using CCTV footage and overheard witness accounts. The viewpoints alternate.
While flawed in the sense that most of the chapters begin as a past-tense personal account and then shift to first-person present narrative (which means many of the chapters sound like they've been written by the same person, with only vague differences in style), I was in need of a fast-paced read and Robopocalypse perfectly fit the bill. My only big complaint was the strong rural accents of many of the Oklahomans.
I mentioned that I was perplexed by the hick accents in Robopocalypse on Twitter and the author responded that perhaps I wouldn't be baffled if I'd grown up where he did. I told him where I'm from (just outside the Osage Nation, where the Oklahoma scenes take place) and I think he was a little stunned. My hometown was, however, heavily populated by people who were transferred in from the Midwest, at least during my youth, and strong rural accents were rare. Even amongst those I'd encountered, I don't think I came across anything quite so dramatic. The author told me he's from Tulsa "with a heavy dollop of Wagoner and Sallisaw," and, "I was channeling my own grandfather's voice through Lonnie Wayne." So, basically, I had called his grandfather a hick. Not that we don't have a few hicks in our extended family, but I need to learn to screen my tweets better.
At any rate, I still wish the author hadn't chosen to give a major character and quite a few others that heavy rural accent. I'm often frustrated by the way Oklahomans are portrayed (generally with a strong redneck bent, particularly in cinema) when most of the people I've encountered in Oklahoma have a soft Southern accent, at best, (think James Garner) and often a non-accent akin to that in the Midwest -- close to dictionary pronunciation. But, the book is great entertainment. I just tried to barrel through the heavily-accented scenes.
What I found most impressive was the technical aspect of the book. The author has degrees from the University of Tulsa and Carnegie Mellon in robotics (which I assume means he's a mechanical engineer; my sis-in-law, a mechanical engineer, did some robotics work in school). I always love reading a book written by an engineer because I'm comfortable with the way engineers speak. Also, Mathilda is an awesome character.
The movie is, unfortunately, going to be entirely filmed in Montreal, Canada. I was really hoping at least the Utica Square Mall scene would be filmed in Tulsa. It's scheduled for release in 2014. The book is pretty violent but it's about war so you have to expect that. I'd anticipate a lot of blood and screaming in the movie.
Books that walked in, this past week:
And, that leads to what I'm currently reading:
I have some other in-progress books set aside but right now my focus is on two of the new arrivals. This Year You Write Your Novel is just 103 pages and I'm on about page 50-something. It's a very succinct book about what's important to know if you want to write a novel in a year, starting right now. It's extremely informative and nicely boils down the bare bones necessary to writing. Also, Mosley is superb at giving you a verbal kick in the pants. I'm enjoying This Year You Write Your Novel. I've completed several novels but haven't written fiction regularly in years so it's providing an excellent refresher course.

Kaytek the Wizard has a Harry-Potterish cover but it was written in 1933 and is quite different from today's fantasy novels. Kaytek is a young boy who wants to become a wizard and by concentrating on what he wants to happen, eventually succeeds. But, he's young and impulsive and most of his spell-casting causes chaos. Will Kaytek learn to control his powers and use them only for good?
I'm close to halfway into Kaytek the Wizard. I was intrigued when I read about the author, who ran an orphanage and chose to accompany his orphans to Treblinka concentration camp, where he died with them during WWII. Also, it was kind of cool to get a parcel with stickers saying it had originated in Jerusalem. Kaytek doesn't have the advantage of a handy school for wizards, but occasionally he'll get a helping hand (or a swift kick) from some invisible source.
Last but not least is an Izzy photo. Imagine wider eyes and the ears completely flat against her head (sheer terror, in other words) and you'll know what I see when I plop her post-medicine kitty treats into a bowl. Isabel is so smart that I have to change where I dose her and how, constantly. Otherwise, I'd never be able to catch her. She pretty much spit her entire morning dose onto my hand, today, so she'll be wrapped in a towel for tonight's medicine. Wrapping her up gives me just a tad more control. 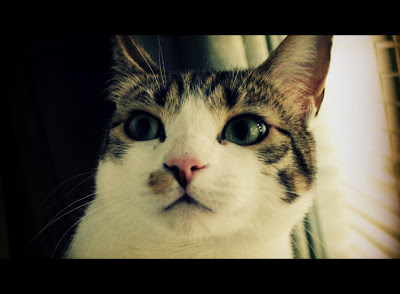 Okay, back to packing. My life is just a series of bags and boxes, right now. What kind of malarkey is going on in your world?
©2012 Nancy Horner. All rights reserved. If you are reading this post at a site other than Bookfoolery and Babble or its RSS feed, you are reading a stolen feed. Email bookfoolery@gmail.com for written permission to reproduce text or photos.
Posted by Bookfool at 1:16 PM