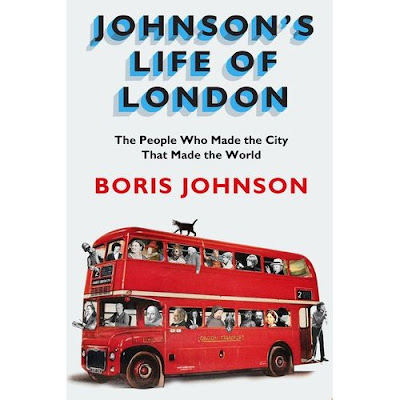 Johnson's Life of London: The People Who Made the City That Made the World by Boris Johnson is a book of mini biographies about the people who shaped the city of London, from ancient times to modern. Author Boris Johnson is currently the mayor of London and was reelected to a firestorm of rather humorous tweets, like this one:
Mark ‏@shadowsans

London, the rest of the country is looking at you in the same quizzical way they looked at the US when they re-elected George W.

I really know very little about Boris Johnson, although since that tweet I've read a little bit about him and find him a rather fascinating man. I'm very impressed with Johnson's writing. It's a delightful blend of erudition and humor. Thanks to his rocking vocabulary, I have a boat-load of words to look up and will just leave the Post-its in place, for now, since I'll be shy on time for a while. Here's a random paragraph from the intro about London Bridge:
By the time I get to cycle home, most of the morning crowds have tramped the other way. Like some gigantic undersea coelenterate, London has completed its spectacular daily act of respiration--sucking in millions of commuters from 7 a.m. to 9 a.m., and then efficiently expelling them back to the suburbs and the Home Counties from 5 p.m. to 7 p.m. But the rift home is more staggered. There are pubs, clubs and bars to be visited, and as I watch the crowds of drinkers on the pavements--knots of people dissolving and reforming in a slow minuet--I can see why the city beats the countryside hands down. It's the sheer range of opportunity.
-- from p. 3 of Advanced Reader's Copy, Johnson's Life of London (some changes may have been made to the final print version)
Johnson's bios cover the following characters and their impact on London: Boudica, Hadrian, Mellitus, Alfred the Great, William the Conqueror, Geoffrey Chaucer, Richard Whittington, William Shakespeare, Robert Hooke, Samuel Johnson, John Wilkes, J. M. W. Turner, Lionel Rothschild, Florence Nightingale and Mary Seacole (a shared chapter), W. T. Stead, Winston Churchill, Keith Richards and . . . rather oddly . . . The Midland Grand Hotel.
Some of these characters appear to be surprising choices and several may only be known vaguely by Americans. When I saw the name "Richard Whittington," my first thought was the story of Dick Whittington's cat, which he happily debunks. Johnson chose a variety of characters from science and engineering, the arts, politics, royalty, industry and health care so that everything from invention, the English language, eradication of disease, musical trends and law to the funneling of huge numbers of people throughout the city is covered.
Highly recommended to lovers of history, biography and the city of London, as well as general Anglophiles and anyone who enjoys a solid work of nonfiction. Johnson's Life of London is impressive. I need to reread it after I've defined all those vocabulary words. Definitely a 5/5. 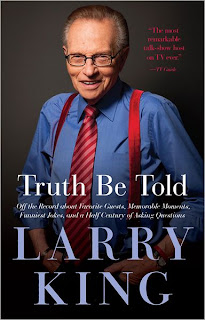 Truth Be Told by Larry King is subtitled "Off the Record about Favorite Guests, Memorable Moments, Funniest Jokes, and a Half Century of Asking Questions."
In general, I figured Truth Be Told would be a gossipy book full of fun anecdotes about the many people Larry King has met and interviewed, over the years, thus a name-dropping sort of memoir. I'm not really a big fan of "star" memoirs but I like Larry King and the idea of reading anecdotes that go as far back as the years of Sinatra and Jackie Gleason was just too intriguing to pass up.
Truth Be Told is an interesting blend of narrative with sections entirely devoted to categorized anecdotes, many from friendships rather than the show itself. I found that I enjoyed the anecdotes better than the narrative portions, although the narrative offered plenty of interesting information.
When the author discussed music, for example, he talked about how Natalie Cole's visit to the show led to the donation of a much-needed kidney to Cole, his surprise at how beloved John Lennon was when the phone lines were jammed with crying people upon the news of Lennon's murder, and a time when Elvis bought a limo driver the car as his tip. There are stories about Sinatra getting involved in a pie fight at a diner and how Mel Torme wrote his beloved Christmas song (the one with "chestnuts roasting on an open fire") because it was so fiercely hot that he wanted to come up with something that would make him think cool thoughts.
He talked about broadcasting and how it's changed over the years, how news has gone from informative to dramatic. King also wrote one of the best descriptions of President Obama's election versus his presidency that I've read:
Obama did stave off a Depression. He passed the first major health care bill in seventy-five years. He pulled our troops out of most of the principal cities in Iraq. He bailed out General Motors, settled the economy, and made money for the government in the process. Those were all winners.
He inherited Afghanistan. I don't know how you win there. . . .
Colin Powell told me that what Obama lacked was a main attack. He said Obama would have been better off if he'd focused on the economy and fixing unemployment to the exclusion of everything else. Not that the other issues weren't important. But it would have put a spotlight on this one area that was vital to every American and given him a clear way to communicate his victories. It could have been a Now we can! that opened the door to the other issues, like health care, that were deeply important to him.
--from p. 145 of Truth Be Told
Some of his thoughts about the presidential election are already outdated as the book was copyrighted in 2011, but many are still relevant.
The only thing I really disliked about Truth Be Told was the final chapter about Larry King's plans to become a comedian. "I am funny," he says. The occasional arrogant-sounding statement, like King's flat claim that he's funny, is undoubtedly to be expected. People who've achieved fame on a level of being a household name tend to be pretty pleased about it, so I expected a little bit of that. But, Truth Be Told is amusing, entertaining, juicy fun and King balances his occasional pride with plenty of humility. He really sounds like a very decent guy and there's no escaping the fact that he has plenty of interesting tales to tell.
Recommended to fans of Larry King, folks who enjoy memoirs by the famous and those who are curious about the wealthy and famous people King has interviewed, over the years. I particularly enjoyed anecdotes from the earlier years.
In other news:
We have closed on our house (on Tuesday -- I think I'm still recovering)!! Yesterday, we bought a scaffold for painting because the ceilings are high and we took some cleaning supplies and a few other essentials like water, hand soap and towels to the house. We'll start painting, this weekend. It'll be a while before we actually move in, but it's exciting to have the paperwork finished.
Also, today is a very special anniversary day for an object in my house. I'll do a separate post about that, in a while.
I miss visiting your blogs! With all the running back and forth and more packing, painting and then repair of our current home to get it ready to sell, I have a feeling it could be months before I regularly visit bloggers, again. When I have time, I do dip into a few blog posts but I'm usually so staggering tired that I can't even manage to say, "Nice review," or whatever happens to be relevant. Wish me strength in the coming months. I'm doing my best to avoid taking a complete break from blogging because it does provide me with a little personal time to sit and purge my thoughts about books.
Happy Thursday!
©2012 Nancy Horner. All rights reserved. If you are reading this post at a site other than Bookfoolery and Babble or its RSS feed, you are reading a stolen feed. Email bookfoolery@gmail.com for written permission to reproduce text or photos.
Posted by Bookfool at 2:35 PM