Hello! Monday Malarkey turned to Tuesday Twaddle because of an evening of painting at the new house.
We're all done de-pinking the "library". So, after cleaning the floor, we'll start bringing in shelves and books. Meanwhile, I've moved on to un-greening the master bedroom. Here's what the bedroom looked like when the previous owner was still in residence: 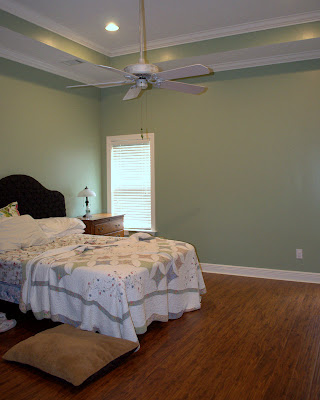 Oddly, she left that headboard in the garage.
I'm actually quite fond of green, but I prefer a neutral color in my bedroom so I can change bedspread/quilt colors without having to paint, again. Plus, I had a different color scheme in mind. We have to buy new linens because we are finally getting a new bed, after 29 years on the same old mattress and box springs. Woot! I am so ready for a new mattress!!! I'll show you the color I settled on, when the room is all painted and put together.
In other news:
Kiddo got the keys to his apartment in Oxford and took a load of his possessions, including his bed (without the frame), this weekend. He then came home and agreed with his father that they should put a twin mattress and box springs on his full-size frame, in spite of my noisy protests. Kiddo sat on the bed and promptly broke one of the slats. I have been heckling my husband the engineer about how he should have known the amount of stress would not have been spread as evenly over the slats and breakage was a likelihood. He responded that he's a better manager than engineer. Haha.
Kitty news: 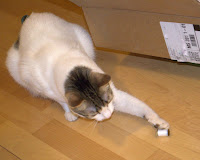 Isabel has been sick, again!! Can you believe it? I don't know if she didn't get enough antibiotic or she's got something new, but she was sluggish all weekend (but smiling -- seriously, she stayed near me instead of hiding and seemed fairly happy, in spite of being miserable) so I took her to the vet, yesterday, and found that once again she had a fever, this time 104.2.
She got a shot of antibiotic, anti-nausea and something else -- not sure what. Well, it did the trick. This morning she was all bright-eyed and chipper. She chattered away at me, begging for head-to-tail rubbings and generally making a nuisance of herself. I was so thrilled to see her back to normal! She's angry with me, at the moment, since I took her to the Scary Place and she got an additional, long-lasting antibiotic shot to keep the magic going. Update: Isabel's huff lasted about an hour. I have been forgiven. :)
Mini reviews of books finished, this week: 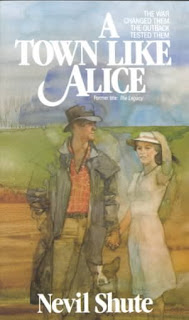 A Town Like Alice by Nevil Shute is a book I read for my Face to Face book group, although I didn't make it to the meeting because I got the meeting week wrong in my head and had only managed 100 pages by meeting time. It's about a woman named Jean who was captured during WWII in Malaya and marched around the country with a number of other women and someone else's baby till Jean manages to find them a place to sit out the rest of the war, working the rice paddies and dressing like the natives. She recounts her story after finding out she's inherited a large sum of money.
During her imprisonment, she met an Australian man who tried to help them and was killed for his efforts. Or, so she thought. It's a war story, a romance, a story of one incredible woman's strength. Although A Town Like Alice is fiction, it's based on a true story. If you haven't read it, grab a copy. You will absolutely love Jean. She's tough but kind, savvy but a woman who uses her abilities to help everyone, not just herself. Excellent, excellent book -- copyrighted in 1950 and no wonder it's still around. Highly recommended in a very pushy way, with fireworks and dancing. I've got a pending post of quotations to which I'll add my favorite bit from A Town Like Alice. 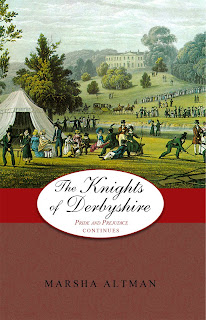 The Knights of Derbyshire by Marsha Altman is, I think, the fifth in her Pride & Prejudice spin-off series -- the only series of its kind that I have become addicted to. Seriously addicted. I absolutely love Altman's adventurous, witty tales.
In The Knights of Derbyshire, the Darcy's eldest son, Geoffrey, becomes the victim of dangerous men. Will he survive? Meanwhile, George Wickham the Younger rescues his sister from a marriage for her inheritance and is kicked out of Oxford for missing his final exams, then kicked out of his family's house for not happily sharing his inheritance with his mother, Lydia. There is the usual fun, tension, adventure and romance. The Knights of Derbyshire is definitely one of my favorites in this series, so far. You absolutely must read this series in order -- and should, if you have any interest in P & P spin-offs.
This entire series is highly recommended. Be advised that Altman has had several different publishers. The Knights of Derbyshire is available through Amazon, as are the rest of her books, beginning with The Darcys and the Bingleys. See my review of The Ballad of Gregoire Darcy for a link to all of my other reviews.
There are quite a few small errors in the new book, but I was forewarned by the author and told they will be eliminated. That was 2 months ago, so hopefully things have been fixed by now. The errors didn't get on my nerves; none were huge and I was expecting them.
Books that walked in, this past week:
Sin by Zakhar Prilepin - from Glagoslav Publications for review
The Lost Button by Irene Rozdobudko - from Glagoslav Publications for review
The Wild Princess by Mary Hart Perry - from HarperCollins for review
Shadow Show ed. by Sam Weller and Mort Castle - from HarperCollins for review
Shadow of Night by Deborah Harkness - win from Amy at Life by Candlelight (Thanks, Amy!)
And, what am I reading, now?
I'm reading two books, one nonfiction and one fiction. The Aleppo Codex by Matti Friedman, which I got unsolicited from Algonquin Books (I love Algonquin -- the unsolicited books they send are often among my personal favorites). The Aleppo Codex is an adventurous tale of the author's search for the truth about how a book known as the oldest copy of the Bible was smuggled out of Syria and taken to its original home in Jerusalem.
My fiction choice is a backlist title: Dreaming in English by Laura Fitzgerald. It's another unsolicited book and it was kind of a satisfice. I wanted to read something light and I had a particular recent arrival in mind, Enchanting Lily. But, guess what? I took Enchanting Lily (and a few other titles) to the new house because I wanted to have some books on hand, in case I got stranded at the house in a thunderstorm. We had big storms popping up daily, for a while. So, when it came time to choose a new title to start reading, the book I wanted was at the new house . . . and I was at home in the old house.
I didn't read Dreaming in English when I received it because I read a review advising readers not to skip the first book, Veil of Roses. This time, I looked up Dreaming in English at Goodreads and found different advice: "It stands alone well, but it will totally ruin Veil of Roses, for you." Fine. I never did get around to finding a copy of the first book and Dreaming in English fit my needs, right now.
I'm enjoying both books -- reading slowly, of course, since we're still packing and painting and all that, but when I sit down to read I'm immediately swept away, regardless of which book I'm in the mood for.
Interesting development:
We have been asked to rent our house out to someone who works with my husband (temporarily) by September 1. Oh, dear. I thought we'd have a bit more time to get the place cleaned up thoroughly. The fellow who asked is going through a divorce and he's tired of staying in a hotel. So, we're probably going to say yes, just to be kind to him. If necessary, I'll take a blogging break but as long as I can keep up with two posts a week, I will.
What's up in your world?
©2012 Nancy Horner. All rights reserved. If you are reading this post at a site other than Bookfoolery and Babble or its RSS feed, you are reading a stolen feed. Email bookfoolery@gmail.com for written permission to reproduce text or photos.
Posted by Bookfool at 3:47 PM