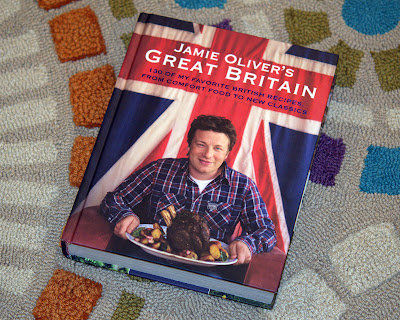 Jamie Oliver is by far my favorite television cooking personality for two reasons: 1) Everything we've ever attempted from his cookbooks has been delicious -- everything!  2) I love his focus on eating healthy and buying local foods.  In fact, I wish he would fly down here and write a book on using local ingredients from my area.

When I found out Jamie Oliver's Great Britain was going to be available for tour with TLC Book Tours, I signed up as fast as my little fingers could type.  And, I was not disappointed.  The first recipe we tried (with husband doing the cooking) was "Heavenly Salmon Salad". 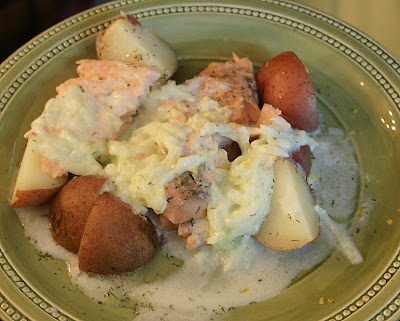 "Heavenly Salmon Salad" is so packed with flavor I couldn't shut up about it.  I talked about it on Facebook and I tweeted about it on Twitter.  The recipe is too long to copy or I would share it -- and here is where we get into a couple things I love about Jamie's cookbooks.  Instead of just writing the old-fashioned kind of recipe with limited instructions to fit on a recipe card, he goes into great detail about the entire cooking process, including how quickly your potatoes will cook depending upon their freshness, the exact order in which to cook the separate parts and how to put them together.  Here's a peek at the page spread for "Heavenly Salmon Salad". 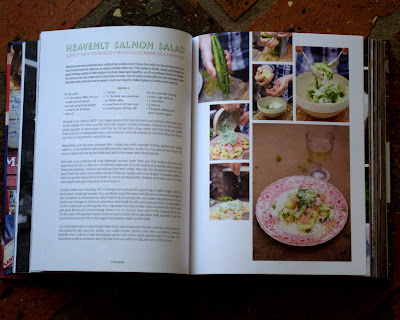 We had no trouble locating any of the ingredients for "Heavenly Salmon Salad" although we have tried several recipes and one contained a "bottle of something-something that I'd never heard of" according to the spouse.  However, in most cases, the author does mention items that can be substituted and my husband is so crazy about this cookbook that when I asked him to tell me his thoughts about the book he said, "Don't say anything negative," not once but twice.  Given the number of recipes he's tried, the fact that I haven't yet been able to pull the book away long enough to read it, myself, and that repetitive remark about keeping my review positive, I'm pretty sure Jamie Oliver's Great Britain is his new favorite cookbook. If it's not in the cookbook holder, it's in his hands.

The photos and added text in Jamie Oliver's books are always a treat.  I can't wait to actually read the book from cover to cover.  I've flipped through and read some random bits.  "My Nan's St. Clement's Cake" begins with a paragraph about older folks coming into his parents' pub, the man always asking for a pint of bitter for himself and a St. Clement's ("a simple orange juice and lemonade combo") for the wife, how the name of the drink came from a nursery rhyme and then a bit about texture of the cake and the fact that it's great in cupcake form.  Then, he dives into the recipe.

The book is crammed full of photos; it is absolutely gorgeous! Even if you have no interest in British recipes, if you're an Anglophile you'll want to grab it to sit and read.  It's every bit as good as a travel memoir, perhaps even better because Jamie's Great Britain is written with affection about his own country and people.

One of the other recipes we tried was "Pale Ale Fondue".  If you've ever made a Welsh rarebit (a beer cheese on toast), this is similar but the ingredients are a little more upscale than what we've used in the past and, again, the flavor was perfect.  There's a list of twelve suggested items to use for dipping, "but really the sky's the limit".

Highly recommended.  My husband did the cooking and it's been nearly impossible to wrestle the book out of his hands, but it's so beautiful that I'm anxious to read the book from cover to cover.  Detailed recipes with excellent results, tons of gorgeous photos and lots of extra material about Great Britain (text and photos) make for a fantastic cookbook that is gorgeous enough to set out on a coffee table.

Cover thoughts:  Perfect, perfect.  You can't miss the Union Jack's statement, "Here is a British book", can you?

I don't usually do giveaways because they're a bit too much work but in this case I'll make an exception because my husband and I are so crazy about Jamie Oliver's Great Britain.

The rules (you must do *everything* on this list to qualify):

1.  Tell me the title and author of your favorite cookbook
2.  Leave a contact email address that works!!!
3.  US/Canada only, no P.O. boxes.


©2012 Nancy Horner. All rights reserved. If you are reading this post at a site other than Bookfoolery and Babble or its RSS feed, you are reading a stolen feed. Email bookfoolery@gmail.com for written permission to reproduce text or photos.
Posted by Bookfool at 11:19 AM