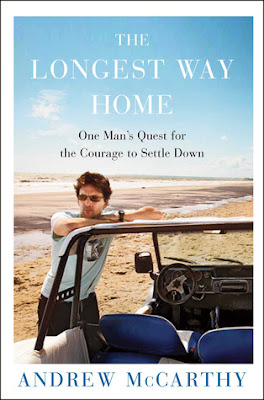 The Longest Way Home: One Man's Quest for the Courage to Settle Down
By Andrew McCarthy
Copyright 2012
Free Press - Travel Memoir
273 pp.


A few more vestiges of Iquitos's glory days line Prospero Street, but there is little else to point toward any immediate appeal.  Despite this, the hanging heat and dense folds of humidity, there's a shaggy-dog charm to Iquitos.  There is nothing here that is remotely reminiscent of my life back home--none of the threadbare shops, or primitive advertising, or restaurants have a familiar or even recognizable feeling about them.  Such an alien sensation is increasingly rare in a world heading toward homogenization.  The only thing familiar in this environment is me; consequently, I am acutely aware of my own thoughts, which in moments like this run toward a feeling of possibility.  I wish I were staying in town for longer, possibly much longer.

I almost passed up the opportunity to read and review The Longest Way Home, but I kept returning to the email about it, reading the description until I wore myself down with longing . . . thank goodness.  The best of any memoirs are written with a blend of wide-eyed wonder and humility, with stories about interaction between traveler and locals as well as description that makes the reader want to jump up and start packing.  Andrew McCarthy's memoir is all that and much more.

From the publisher's description:

"Unable to commit to his fiancee of nearly four years--and with no clear understanding of what's holding him back--Andrew McCarthy finds himself at a crossroads, plagued by doubts that have clung to him for a lifetime.  Something in his character has kept him always at a distance, preventing him from giving himself wholeheartedly to the woman he loves and from becoming the father that he knows his children deserve.  So before he loses everything he cares about, Andrew sets out to look for answers.

Hobbling up the treacherous slopes of Mt. Kilimanjaro, dodging gregarious passengers aboard an Amazonian riverboat, and trudging through dense Costa Rican rain forests--Andrew takes us on exotic trips to some of the world's most beautiful places, but his real journey is one of the spirit."


I'm not going to copy the entire jacket description . . .

. . . but, in a nutshell, The Longest Way Home is the story of how one man chose to seek the answer to why he was having difficulty committing and attempt to conquer his fears by escaping to his favorite comfort zone: travel.  Probably the first thing that comes to mind when one thinks of traveling in order to develop courage is, "Isn't that called running away from your problems?" But, the author makes a strong case for travel as a way to get in touch with one's feelings.

Later, I sit by the estancia in the afternoon sun, and take pictures down by the river, and watch birds picking at the grass.  I can imagine myself staying here for a long time, alone and content, at the end of the world.

I have found several places in my travels where I've experienced a similar sensation--the bare and rocky Burren in the rural west of Ireland, on a remote northern coast of Brazil, in central Wyoming, and at an unlikely spot in Hawaii.  Places where I felt received by the land, where my perception of the world and of my place in it fell into sync.  I recognize that sense of belonging instantly.

Why I loved The Longest Way Home:

Andrew McCarthy's writing is strong, evocative and emotional. But, I think part of the reason I truly loved his book is the fact that not only was I entertained but I also deeply related on more that one level. I understand that feeling of connecting to the land and the people of another place more than one's own home, for one thing.

And, I just happened to be married to a fellow who has a very similar personality to that of the author: introverted and solitary, more at home traveling than sitting still, heedless of potential danger in a way that allows him to experience new places fully, driven and successful.  McCarthy explains how he can be both a solitary person and completely devoted to family -- something that's really tough to get across to friends to whom I explain the frustrations of being an extrovert married to a man of few words and with practically no need for human contact.

Apart from all that, I simply loved experiencing new places through Andrew McCarthy's eyes.  While he isn't a person who thrives in a group situation, that doesn't mean he's socially inept -- just more of a one-on-one/small group person. He often connects with people in unexpected, sometimes uplifting, often surprising ways.  Even when he describes being irritated with someone, his reasons tend toward the rational rather than the self-indulgent.

As I was reading The Longest Way Home, I enjoyed my armchair travels so much that as I settled in to read, each night, I told my husband, "I'm in Patagonia, right now," or "I'm off to the Amazon, next," etc.  Each time I opened the book, I knew I was going to be happily immersed.  And, that's really saying something.  Since our move, I've been so weary at the end of the day that it's a rare book that captures me.  I've only managed to read 3 books, so far, in November [muffled scream].

Excellent travel writing with a nice, personal theme, Highly Recommended.  I absolutely loved The Longest Way Home.  A likable author, funny and tolerant fiancee and two sweet children make the author's story of putting his past into perspective and facing his fear of commitment one that makes the reader feel truly invested in a happy ending.  Admittedly, I was a little teary when I closed the book. The places he visited were often off the beaten path -- not the touristy parts of Costa Rica, for example. Andrew McCarthy now holds the distinction of being the first travel writer to successfully convince me that Patagonia is worth looking into.  I've always thought of Patagonia as a place for single guys in North Face jackets and Teva shoes -- you know, Ivy League college guys looking for adventure. Somehow, he managed to make Patagonia sound accessible.

Some may know Andrew McCarthy as the "Brat Pack" heartthrob of Eighties fame who appeared in Pretty in Pink, St. Elmo's Fire and Weekend at Bernie's.  He is still acting and does talk about his career; it's a part of his life story and relevant to the book.  So, if you're a fan, you might be interested in the book for that reason alone.  But, more importantly, he knows both how to tell a story and how to write.  Don't be put off if you tend to avoid books by actors.

About that connection to the land:

One of the places I feel almost bizarrely at home is the site of an iron-age fortress called Barbary Castle in Wiltshire, UK.  I love everything about it: the earthworks that still clearly outline the fortress, the incredible 360-degree view, the sheep, the brisk wind -- even the cranky farmer who made us wait for him to feed his geese before springing us when we got locked into the parking lot.  Is there a place you feel at home away from home?

Usually, I'm not fond of book trailers but I do love the book trailer for The Longest Way Home.

And, I enjoyed this interview:  Alec Baldwin interviewing Andrew McCarthy on Here's the Thing.

Fiona Friday #Fail.  Can I just claim another busy weekend?  Here's a very belated photo of Isabel playing with the drawstring of my new fleece pajamas (which I purchased because our heater has been out for nearly a week -- not all that big a problem here, although pajamas made of blanket material are definitely helpful on the coldest nights). 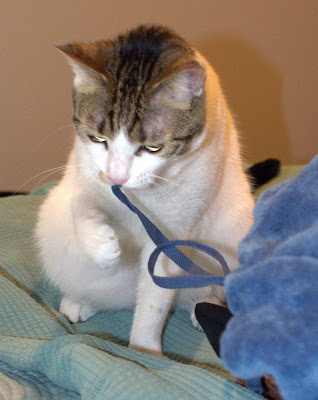 Sorry about the unfinished version of this review that I accidentally posted.  One of my twitter friends suggested I just call it a "preview".  :)

Absolutely no books at all entered my house for another week . . . and then today three of them walked in the door:


©2012 Nancy Horner. All rights reserved. If you are reading this post at a site other than Bookfoolery and Babble or its RSS feed, you are reading a stolen feed. Email bookfoolery@gmail.com for written permission to reproduce text or photos.
Posted by Bookfool at 4:43 PM