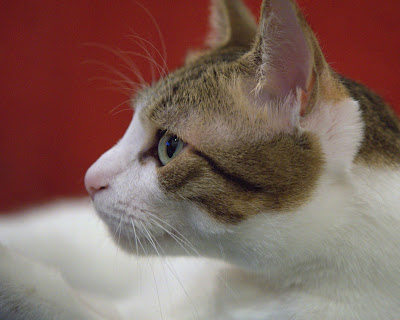 I don't know where the time is going, really I don't.  Last weekend, we had the entire family here, as I mentioned over the weekend.  Fiona actually seemed to enjoy having a house full of people and even acted a little bit sad after everyone left, although she did occasionally hide when the dog came in from the backyard.  Fi is gradually becoming my lap cat.  I'm very thrilled about that.

Isabel really disliked feeling obligated to retreat to the closet and occasionally emerged as far as the master bedroom long enough to bat a jingle ball around.  At night, she contentedly slept beside my feet. The moment everyone left, she was out and about.  She's a skittish girl -- probably for good reason.  She was a rescue and judging from where she was found, Izzy was likely dumped from a vehicle.  But, she's slowly gaining trust and now lets me pick her up and pet her without squealing.  She's just wary of strangers.

We spent a lot of time on the patio/deck of our new house, went out to eat once, ate buffet style another time, and went for a walk in the Cypress Swamp on the Natchez Trace.  It was a great weekend.  This is one of my shots of the Cypress Swamp, where the leaves are just beginning to turn: 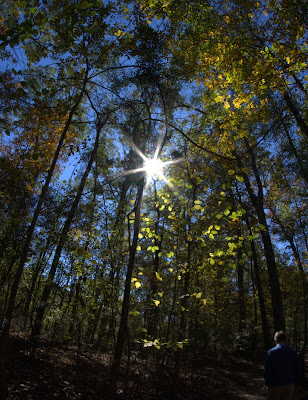 On Wednesday, Kiddo's girlfriend, C, came over to "help" hand out the Halloween candy (she really did the work while I kept her company).  C's going to be a teacher and it shows on Halloween.  She asked almost everyone, "Who do we have here?" and then said, "What do you say?" It's absolutely amazing how few of the kids we've had the past two years knew the words "trick or treat".  C often had to prompt them and even then most of the kids, when asked what to say, replied, "Thank you?"  One said, "Um . . . pleaaaase?"

Unfortunately, we had several hundred trick-or-treaters but we stocked up too much and ended up with one super-sized bag of candy left over at the house and another that C took off our hands.  Usually, I just throw the candy away.  I hate to do that, but we certainly don't need to eat it.  I suppose it's just a matter of pep-talking myself about throwing away something I don't need, which feels just a bit like burning money.

I honestly have not felt like writing at all, hence my absence.  Sometimes I just have to step away for a while.  I'm not going to go on hiatus.  I'll just write when I feel like it.  In the meantime, I have joined National Novel Writing Month.  So, at least I'm writing fiction, if nothing else.

I'm currently reading The Count of Monte Cristo for The Estella Society's read-along.  The Count of Monte Cristo has long been one of my favorite books and I've read it repeatedly.  So, I was a little stunned when I opened the book, last night, and realized it had the word "abridged" on the cover in tiny print.  WHAT?  I've been reading an abridged version, all these years?  My copy is so old and battered that I've actually covered it with clear Contact paper to help preserve it.  I suppose it won't hurt to replace the book with an unabridged version, but I'm still shocked that I never even noticed the word "abridged" on the cover.  In my defense, the print is tiny and the color is close to that of the Count's coat, so it's easy to overlook that one little word.

I think it's been nearly 3 weeks since I mentioned arrivals other than the purchases I made at last week's book sale.  Books are not arriving as regularly as they used to.  I'm so far behind on reading the books off my ARC stacks that I can't remember the last time I requested a book.  One review book arrived, last week, but it's been a while since I requested it.  Recently walked in:

The Cat Who Came Back for Christmas by Julia Romp - an impulse purchase
Miss Buncle Married by D. E. Stevenson - for review from Sourcebooks (the single request book that has arrived)
Blue Like Jazz by Donald Miller - purchased used at a store that specializes in old vinyl record albums
Cooking at Home on Rue Tatin by Susan Herrmann Loomis - from Paperback Swap
Spot the Animals and
1-2-3 Dinosaur's Bite - both illustrated by Steve Jenkins and unsolicited arrivals from Sterling Kids (they're great -- will review them as soon as I can get myself to sit down long enough to write a string of review posts)
The Walnut Tree by Charles Todd - Accidentally pre-ordered while in an Ambien haze.  Ambien should be outlawed (but, darn it, sometimes I need help sleeping!)
How to Talk About Books You Haven't Read by Pierre Bayard - purchased for F2F Book Club and the day it showed up, I realized I won't be able to make it to the November meeting (but it looks fun, so I'll read the book)
The Secret Keeper by Kate Morton - sent by my delightful and generous friend, Tammy

We joined a gym.  It's huge -- three stories including two swimming pools (one for laps; one a "therapy" pool, as it's associated with a hospital), a cold bath and jacuzzi, an indoor track, tons of plated and free weights, a spinning room, two basketball courts, two racquetball courts, a class room (for Zumba, yoga, etc.), one pool table and one ping-pong table.  I actually prefer the smaller gym in our former town.  Unfortunately, it's just too far to drive on a daily basis and I desperately need some kind of routine.  I miss the ladies and it will take some time to get used to our new gym, but there's no denying it's one rocking fine facility.

And, the reason I chose this week's Haiku (which I hear people didn't appreciate during Hurricane Sandy, since the full moon only made tidal issues worse):

Enough for now!  Happy Weekend to all!  And, wishes for quick restoration of power and delivery of supplies to those who are having a rough post-hurricane experience.


©2012 Nancy Horner. All rights reserved. If you are reading this post at a site other than Bookfoolery and Babble or its RSS feed, you are reading a stolen feed. Email bookfoolery@gmail.com for written permission to reproduce text or photos.
Posted by Bookfool at 10:09 PM