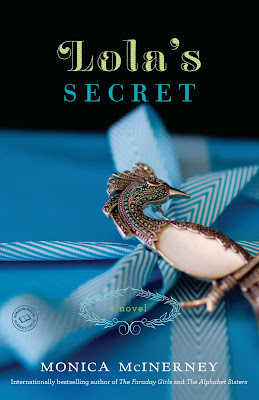 If you've been hanging around my blog lately, you know I recently went on a Christmas-book binge after being tasked with the job of making suggestions for my face-to-face book group's December read.  Lola's Secret by Monica McInerney is one of the books I ended up reading, thanks to TLC Book Tours, and it's an unusual one.  Set in Australia with an 84-year-old heroine, the story is neither the sappy romance I occasionally let myself get sucked into during the Christmas season (although there is a touch of romance) nor the magical variety that I much prefer.

Lola used to run a small hotel but has long since passed the reigns on to her son and daughter-in-law.  She lives in the hotel and owns little, moving from one room to another when the mood strikes her.  As Christmas approaches, Lola decides she wants a change of pace.  Her son and daughter-in-law want to take a vacation and Lola is happy to shoo them away so that she can have a little fun creating a special Christmas for a small number of guests.

But, things don't work out quite the way Lola intended. And, there is where I'll stop describing the book because it's very plot-heavy and I don't want to ruin a thing, but you can count on reading about a headstrong, likable character facing her past and living in the present with admirable gusto. Lola is a terrific character.

It wasn't till I finished the book that I read about Monica McInerney and discovered that Lola originally appeared in a book called The Alphabet Sisters.  If you haven't read The Alphabet Sisters, you are definitely going to come out of Lola's Secret knowing what became of them in the novel, so I advise reading the two books in order if that concerns you.  But, in my case, I found McInerney's writing so engaging that I do plan to look for a copy of The Alphabet Sisters.

As I was gathering information about the book for my review, I noticed the author is often compared to Maeve Binchy.  Shockingly, I have only read short stories by Maeve Binchy and I was disappointed with them.  You can read my thoughts in "London Transports by Maeve Binchy or Please Hit These Characters Upside the Head" (which was written in the Dark Ages of book blogging). But even regular readers of Binchy disliked that particular collection, so I don't think I've gotten a good feel for her writing and certainly cannot compare the two.

As I was reading, I was reminded of Debbie Macomber's writing: lighthearted, sometimes funny, occasionally sad and, most importantly, things keep happening.  I thought the book was consistently surprising. The big difference between Macomber and McInerney lies in the focus on an older woman and her family, rather than a young couple or two.  I only found the two authors' writing similar stylistically, in other words.  Lola's Secret is really a family story, not a romance.  And, of course, it's hot in Australia at Christmas so Lola's Secret is unique in that way. Snow is pretty much a given in a Macomber Christmas book.

Recommended - Lola is a terrific character; wise, witty, spirited, flawed, wacky, upbeat . . . what a treat to read a story with such a well-rounded character. I guess you could call Lola's Secret a seasonal type of "women's fiction" and in that way it was a slightly unusual read for me because I have a tendency to avoid books that are specifically about women and their friends and family.  I have no idea why.  At any rate, I enjoyed it and will definitely look for more books by Monica McInerney.

The Adventures of an Intrepid Reader - I happened across Marg's review, just after I finished reading my copy.  Her post is excellent.  Go read it, even if you're not interested in the book; there's much more to the post than just a review.

The cover is beautiful but it doesn't look very Christmasy, does it?


And, in other news:

Kiddo had car trouble so we had to zip up to Oxford to help him out, this weekend.  Fortunately, it turned out to be a quick fix.  We ate breakfast at home, had lunch with Kiddo in Oxford, shopped a little in Memphis and made it home in time for supper.  What a whirlwind day, but fun!  On the road to Memphis we saw this flock of birds: 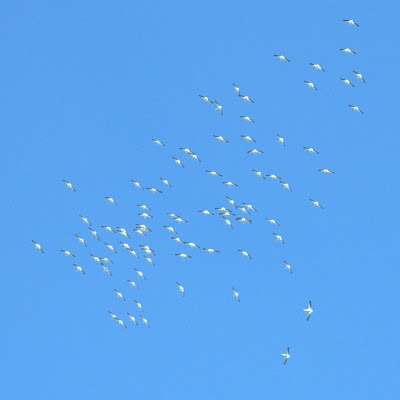 Egrets!  They're hard to see because I didn't have a telephoto lens on my camera, but I'm happy that I was at least able to capture an image of them (through the windshield - fortunately, before it became so bug-splattered that photography became impossible).  It was a beautiful day and the trees are turning in northern Mississippi, so the drive was just about perfect. 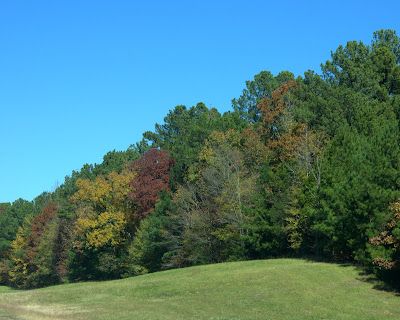 ©2012 Nancy Horner. All rights reserved. If you are reading this post at a site other than Bookfoolery and Babble or its RSS feed, you are reading a stolen feed. Email bookfoolery@gmail.com for written permission to reproduce text or photos.
Posted by Bookfool at 10:59 PM