Mini reviews - Titanic Remembered by Alan Ruffman, Wall and Piece by Banksy and An Unexpected Angel by Janet K. Halling

Time for a few more quickie reviews.  All of the following were recently added to my home library. 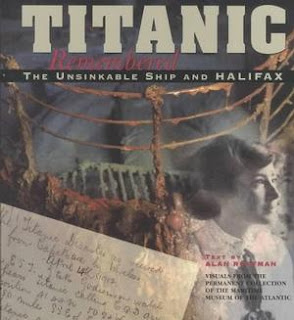 Titanic Remembered:  The Unsinkable Ship and Halifax by Alan Ruffman is the official guide and souvenir book from the Maritime Museum of the Atlantic.  I haven't been there; it's just one of those books that popped up in the recommendations at Paperback Swap when I was looking up other Titanic titles, last year.  Because it's a guide book, Titanic Remembered is quite thin at 70 pages but I must say I was totally impressed.  Titanic Remembered is loaded with photographs and tells the story of the Titanic from the Halifax, Nova Scotia end of the story.
Since Halifax is the place from which recovery ships were sent and where the bodies were buried (those that weren't buried at sea, that is), a good portion is about the process of recovery, identification and burial of bodies.  It was a lot more complex than I'd ever considered.  There are some interesting stories about individuals, both among the perished and survivors (not necessarily the most commonly described victims and survivors) and a few unique tidbits about the collection of souvenirs by those involved in the recovery efforts, as well as a few illicit photos.  Photos of bodies and/or the unloading of them was strictly forbidden but people are sneaky devils.

I found Titanic Remembered surprisingly gripping and the book definitely piqued my interest in the maritime museum.  Highly recommended to those who are not squeamish.  There are a couple photos of dead bodies . . . only a couple. 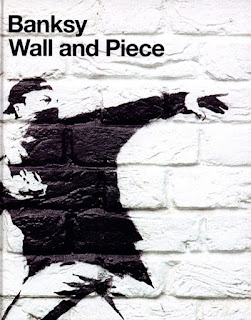 Wall and Piece by Banksy was a gift to myself -- you know, one of those cases of, "Three gifts ordered and one tossed in the cart for myself."  For those who are unfamiliar with Banksy, he's a "street artist" from England who uses pre-made templates to quickly paint his works of art on various walls, bridges, billboards and other surfaces.  Since graffiti is considered an eyesore and is often illegal, most of his artwork has been quickly washed away.  I thought it would be fun to get a book of photographs of Banksy's art -- and it is definitely art, not just a bunch of messy fat lettering, like you often see under bridges and on the sides of trains.
Since this is a book written by Banksy, there is also some text.  Unfortunately, the text doesn't lend a lot of insight into the artist and/or reveal context for the vast majority of the paintings.  However, there was enough to satisfy me.  I don't necessarily agree with Banksy's philosophy that if someone advertises it's a one-way street and people have the right to respond (by painting a response directly on the billboard), but I learned a little about why he paints certain images like rats and some of the meaning behind the themes in his artwork.  As the title indicates with a cute bit of word play, he heavily emphasizes war and peace.   Occasionally, I didn't get what he was trying to say and those were the times I yearned for a bit more text to explain what Banksy was attempting to portray.  But, in general, I loved Wall and Piece.  If you're a Banksy fan, Wall and Piece is worth owning.  Highly recommended with a warning that those who are picky about grammar may occasionally cringe.

Quote on the back of the book:  "There's no way you're going to get a quote from us to use on your book cover."  -- Metropolitan Police spokesperson 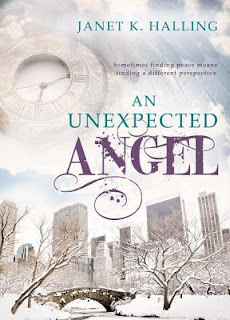 An Unexpected Angel by Janet K. Halling is a drawing win from Holly at 2 Kids and Tired Books.  It's a Christmas book that plays on the Dickens classic, "A Christmas Carol" and the movie It's a Wonderful Life.

Ellie hates everything about Christmas.  After working late on Christmas Eve, she stops to pick up some groceries and snaps at the clerk who attempts to engage her in conversation.  She's not interested in talking.  She just wants to be alone.

But, the clerk turns out to be an angel with an unexpected surprise in store for Ellie.  Instead of the quiet Christmas Eve she's become accustomed to, she is tossed into the past.  Ellie doesn't stay in one time period.  Just as events begin to resolve and her purpose clarifies, she's yanked from one time period and flung into another.  You never know where Ellie will end up next and the reasons she's tossed about don't fully come together until the end, although it's made clear, early on, that Ellie's hatred of Christmas and drive are related to a tragedy in her past.

I absolutely loved An Unexpected Angel.  When I first began the reading, I thought it was going to be a typical, sappy Christmas story, but that thought only lasted a handful of pages.  While the theme was common, I absolutely loved the sensation that one was traveling through time in An Unexpected Angel and I found the resolution deeply meaningful.  One for the keeper shelves, a lovely little Christmas story with heart.  Keep tissues handy when you read this one.  Highly recommended.

I gave all three of these books 5 stars at Goodreads.

On an unrelated note:  I have no idea how to resolve the problem with those huge gaps between paragraphs of text, one of the new problems with the updated Blogger interface.  There are simply times I cannot remove air space, even by going into HTML mode, where it ought to be apparent that there's a large gap.  If you're aware of a solution, please let me know!


©2013 Nancy Horner. All rights reserved. If you are reading this post at a site other than Bookfoolery and Babble or its RSS feed, you are reading a stolen feed. Email bookfoolery@gmail.com for written permission to reproduce text or photos.
Posted by Bookfool at 2:28 PM