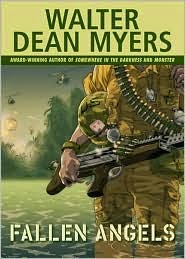 The noise was terrible. Every time a mortar went off, I jumped. I couldn't help myself. The noise went into you. It touched parts of you that were small and frightened and wanting your mommy.

I remember buying Fallen Angels by Walter Dean Myers for Kiddo at a Borders. I had no idea it had been challenged or banned. It was published in 1988 by Point, an imprint of Scholastic, so it was around before Kiddo was born. Had I known it had been challenged, would that knowledge have changed anything? Probably. I would still have bought it but would more than likely have read the book with him or after he read it so that we could discuss it. That was my practice during the tender years. If you read a book with your child, you can talk with him or her about anything that disturbs you or clashes with your beliefs or morals. But, tell a kid not to read something and they're going to do everything in their power to get away with it. I'd already learned that lesson with my eldest.

What's it about? From the cover:

On a jungle battlefront where one misplaced step could be any soldier's last, every move can mean the difference between death and survival.

Richie Perry, Lobel, Johnson, Brunner and Pewee are all in Vietnam. They came there for different reasons, but now they share a single dream -- getting out alive.

It took me at least a good 50 pages to get into Fallen Angels. Myers' style is minimalist, which can come off as awkward during everyday scenes but lends the story an immediacy during action. Richie narrates the story and he is an African-American (although that term isn't used; they're either "black" or "brothers") with a bum knee. At the beginning of the book, he's lamenting the fact that his paperwork has not come through. He shouldn't be going to Vietnam at all because of his knee, but he's on his way.

It's 1967 and there are talks of peace, hopes that the war will end before Christmas. If you were alive during the Vietnam war, as I was, you know those hopes were futile. I was very young but I remember when it ended in the 1970s.

As the book progresses, the men are thrown into greater danger, going on more frequent missions, watching their numbers fall. The book is about war but it's also about poverty and racism, politics, fear, horror and loss. It's about what it's like to be a part of something so terrifying that you know you'll carry those scenes with you forever while, back in the "World", people have no idea what you're going through and often don't even talk about it. What should Perry share with his family? What should he keep to himself? Will he and his brothers in arms survive their year or die horribly and for no good reason?

Fallen Angels is a gut-punch of a book. It's pretty clear why some people might challenge it. There's talk of sex and social diseases, descriptions of graphic violence, challenges to authority. At one point, Perry is aware that people are uncomfortable because he and his best friend, Peewee, are holding hands. There's no implication of homosexuality, but I can see how people who are homophobic might read "gay" into that scene and one or two others.

Highly recommended - A deeply meaningful and powerful read. I wish I'd read this when my son first read it, years ago. War, racism, lack of mercy in a dangerous situation, why someone would choose war over poverty . . . so many topics to talk about. Fallen Angels would make a great discussion book.

Kiddo and I have, in fact, been talking about it by phone as I've been reading. He told me what he loves about it the most is that you come to care for the characters and want them to live. That's exactly how I felt. I know writing from death is a fairly recent conceit but I was still concerned that I was going to find that Perry was writing from beyond the grave, in the end. I didn't want him to die. I cried a little when one of my favorite characters was killed. Fallen Angels isn't a beautiful literary work like The Things They Carried but it leaves you with that same, "You were there," feeling.

To close, one of my favorite passages (because it made me smile):

"Man, this ain't even Boonieville," Sergeant Simpson said, "This is the suburbs of Boonieville." He threw his gear on the small folding cot in the hooch that was our new home outside of Tam Ky.

©2014 Nancy Horner. All rights reserved. If you are reading this post at a site other than Bookfoolery  or its RSS feed, you are reading a stolen feed. Email bookfoolery@gmail.com for written permission to reproduce text or photos.
Posted by Bookfool at 11:40 AM