Lock In by John Scalzi 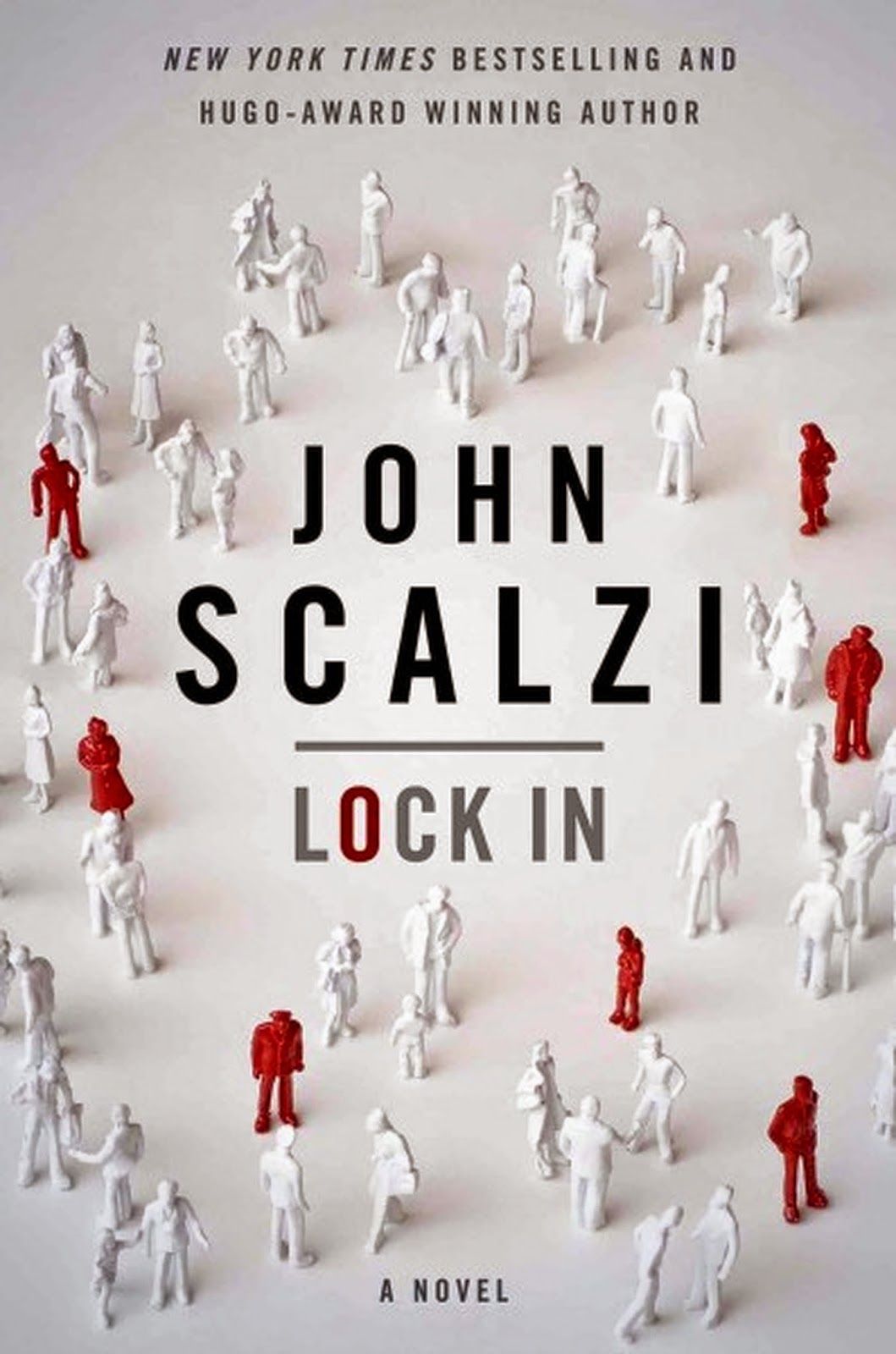 I like the cover of Lock In better than the book.  Huh. I usually love John Scalzi's writing. Granted, the final section (the three codas) of Redshirts lessened the reading experience for me. But, I always feel like I'm in the hands of a brilliant mind when I'm reading Scalzi's work. So, why didn't Lock In work for me? Well, let's look at the elements.

Lock In is a detective story (mystery) set in a future (sci-fi) that takes place after a pandemic (health/politics). Shane came down with the disease as a child and is well-known as the "poster child" for Haden's Syndrome, the virus that locked him into his body without the ability to move or respond to stimuli, like many other survivors of the virus. He has an implanted neural net that allows him to get around in an android-like body with all sorts of computerized features. He can record and store video and other information and refer back to it, transport his brain into other "threeps" or android bodies, view additional information in a Google-glass manner that streams across his vision or hang out in a virtual agora, where he can mingle with other locked in "Hadens".

Shane is also a brand spanking new FBI agent. His partner had Haden's but without loss of mobility and was, at one time, an "integrator" -- a person who has an implanted neural net for the sake of allowing locked in Hadens to access a human body, move and feel, while the integrator is still present and aware but suppressed, having ceded the ability to control his body to a client.

There's a lot of complex world-building in Lock In and it's very, very well done. You can't help but be impressed by the level of thought that went into this world. However -- and this is a big "however" -- I thought there came a point that the details of the world got in the way of the story, itself. Halfway into the book, I found myself irritated that Scalzi was still explaining his world to me. Maybe I didn't need to know everything or some of what he explained was intuitive enough that the author should have given the reader a little credit for understanding without detailed explanation? I felt like he was trying to show the reader just how well he'd thought out his backstory by shoving it into the narrative or dialogue at every opportunity.

There's also the problem that Lock In is a detective story with a boat-load of characters. I burned out on mysteries years ago -- at least a decade ago -- so a mystery/detective novel is a hard sell for me. When I pick up a John Scalzi book, I do so in anticipation of a good sci-fi read. I do occasionally read mysteries but I've never returned to loving them. The number of characters added as the story progresses amounted to yet another road block; they made my head spin. I managed to keep most of them mentally sorted but it would have helped if I'd read the book in paper form rather than electronically because it's a nuisance to flip back through an e-book to locate previous mention of a character.

Otherwise, my only problem with the book was that I didn't feel like Scalzi did an adequate job of describing the threeps. Were they basically hollow plastic shells or more flexible and closer to human in appearance, like Data in Star Trek: The Next Generation? I never had a fully developed image of a threep in my mind, although I leaned toward the former (hard plastic shell). I do believe the fact that Shane was independently wealthy and could rent a new threep at any time if, say, a borrowed threep didn't work out or was damaged, made things a bit too easy. But, his wealth also did serve a purpose so the ways in which he avoided certain barriers to action due to access to money didn't bother me as much as my inability to fully visualize how the character was represented each time he switched threeps.

Recommended but not a favorite - I didn't expect this to end up such a lengthy review! There were a lot of things that bugged me about Lock In that are personal issues, like the fact that it's basically a detective novel, so I would not dissuade anyone from reading Lock In. However, even with personal prejudices aside, I don't think it's Scalzi's best work; and, since I also found Redshirts disappointing, I'll go back to Scalzi's earlier works in the future, rather than eagerly awaiting new releases.

Cover thoughts - The cover image is an excellent graphic representation of the fact that only a fraction of the population ends up permanently damaged by the virus. It's both eye-catching and a good fit for the storyline. I really do love it more than the book. But, I liked the book; I just didn't love it.

©2014 Nancy Horner. All rights reserved. If you are reading this post at a site other than Bookfoolery  or its RSS feed, you are reading a stolen feed. Email bookfoolery@gmail.com for written permission to reproduce text or photos.
Posted by Bookfool at 1:34 PM

Email ThisBlogThis!Share to TwitterShare to FacebookShare to Pinterest
Labels: John Scalzi, mystery, recommended but not a favorite, sci-fi, Tor Books