From the stacks - Spillover by Quammen, The Sparrow by Mary Doria Russell

I just recently acquired Spillover by David Quammen and The Sparrow by Mary Doria Russell (the former purchased after book buddies talked about it; the latter via Paperback Swap after a lengthy wait). Both are books I enjoyed for completely different reasons. 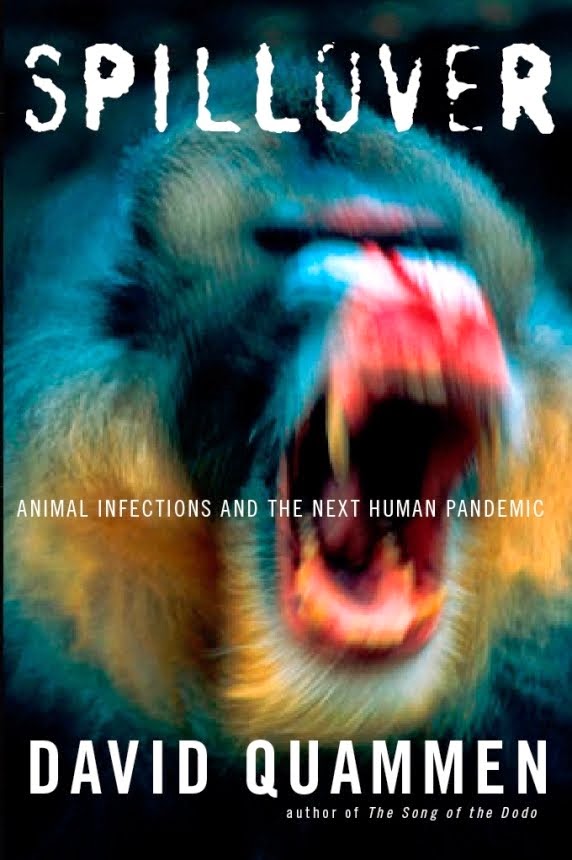 I bought Spillover after eavesdropping on a conversation between Jill of Rhapsody in Books and Michele of A Reader's Respite. Subtitled "Animal Infections and the Next Human Pandemic," the book is about diseases that cross the animal-human barrier, how scientists isolate such diseases, find the animals from which diseases spill over to humans and work backward to find reservoir animals (those who continue to carry the disease, with or without the disease infecting its hosts), why viruses are particularly scary, which are most likely to cause devastation if they aren't stopped quickly enough during an outbreak, how diseases have traveled and been contained in the past, etc.

At around 600 pages, Spillover goes pretty deep into the history and origins of quite a few terrifying illnesses, like Ebola, SARS, Marburg, and AIDS. My timing was interesting. As I began reading this book, my cousin (an epidemiologist who used to work for the CDC) was sharing articles about the latest Ebola outbreak in Western Africa. The outbreak had been going on for around 3 months without being contained and was not yet making the national news but the numbers (cases and deaths) were just beginning to outpace previous outbreaks. Now, of course, the disease has exploded; the latest outbreak is unprecedented in many ways and I think, if anything, we're probably not concerned enough, at least in the right ways. The panic about Americans being flown home under careful conditions was silly. It's the idea of someone infectious hopping a plane without realizing they're infectious that's of concern. [Update: I guess we'll see how that goes, since Ebola has arrived in the U.S. in an uncontained manner.]

I also learned that I've been misled into believing that deer are responsible for Lyme disease. They are not, and mass killings of deer have been proven not to lower incidents, but deer killings for reduction of Lyme disease are still occurring.

Spillover is both fascinating and terrifying. When you read it, you'll find yourself thinking you should always, always wear a medical-grade mask on airplanes, possibly gloves. You'll wash your hands more frequently and worry about the person coughing nearby. It's a bracing read. But, it's also an important one. I had no idea, for example, that the SARS outbreak of a few years ago really was a "pandemic", an epidemic that traveled around the world. It's so difficult to tell whether or not the news is blown out of proportion that I really thought it was no big deal. Fortunately, that particular pandemic was contained before it became as deadly as it could have but it is extremely easy to acquire and is a vicious killer with a high death rate. And, then there's AIDS, a slow-moving but long-lived pandemic that we have come nowhere close to conquering. David Quammen has since written a book entirely about the search for the reservoir of AIDS. Spillover was published in October of 2012 by W. W. Norton and Co.  My thanks to Jill and Michele for talking about it. I love a good, messy medical read and highly recommend it to those interested in medical history.

Also, if you're interested in following non-inflammatory news about Ebola and other emerging illnesses and outbreaks, CIDRAP is by far the best online site. 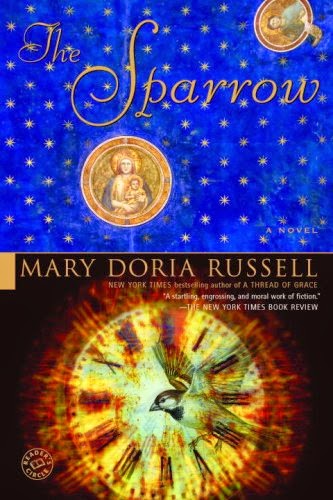 The Sparrow by Mary Doria Russell originally came to my attention via Les's review at Prairie Horizons. I added the book to my wish list at Paperback Swap and waited. It was a long wait. I just happened to receive my copy about a week or two before Trish of Love, Laughter, and a Touch of Insanity (link leads to Trish's post about The Sparrow) began talking about doing a Sparrow Read-along.

I'm snatching the description from Goodreads:

In 2019, humanity finally finds proof of extraterrestrial life when a listening post in Puerto Rico picks up exquisite singing from a planet which will come to be known as Rakhat. While United Nations diplomats endlessly debate a possible first contact mission, the Society of Jesus quietly organizes an eight-person scientific expedition of its own. What the Jesuits find is a world so beyond comprehension that it will lead them to question the meaning of being "human". Worlds like "provocative" and "compelling" will come to mind as you read this shocking novel about first contact with a race that creates music akin to both poetry and prayer.

The book is written from two perspectives. It's not a spoiler to say that Emilio is the only survivor of the expedition. You know from the beginning that he has returned both physically and emotionally damaged. He's extremely ill, badly injured, traumatized and depressed. He's also unwilling to speak about what happened on Rakhat. Scenes from after Emilio's return are interspersed with those from the past, describing the discovery of the signal from Rakhat, the decision to launch an expedition, the personalities involved and what happened once they arrived. As Emilio heals, his story unfolds.

The Sparrow is an emotional, exhausting read. As I was reading I noticed that people used words like "gutted" to describe how they felt. One mentioned feeling shocked midway through the reading. I didn't feel a real emotional punch till near the end. Some of the deaths were unexpectedly violent and particularly gut-wrenching. Emilio's experience, though, was the part that moved me the most. You have a vague idea what happened to him but not the details, till near the end of the book. It was what happened to Emilio and how he ended up blaming himself that made me feel queasy with horror. But, I closed the book feeling satisfied and tired and ready to chatter about it. There's plenty to discuss, so it was a good book for a read-along and definitely one I'd recommend, particularly for book group discussion. I didn't love it. It sounds like I did but from a macro viewpoint it was not a favorite; it's a book with elements that I adored, some that I disliked. I was alternately engrossed and bored, inspired and wearied. I loved the characterization and the mode of transportation to Rakhat, more than anything. My thanks to Trish for the nudge. I probably would have just plunked The Sparrow on the shelf and waited till it called to me. I'm glad I read it with a group, instead.

©2014 Nancy Horner. All rights reserved. If you are reading this post at a site other than Bookfoolery  or its RSS feed, you are reading a stolen feed. Email bookfoolery@gmail.com for written permission to reproduce text or photos.
Posted by Bookfool at 12:16 PM