Last week was fun. One of the local colleges held its book bazaar. Look at all those books!!! 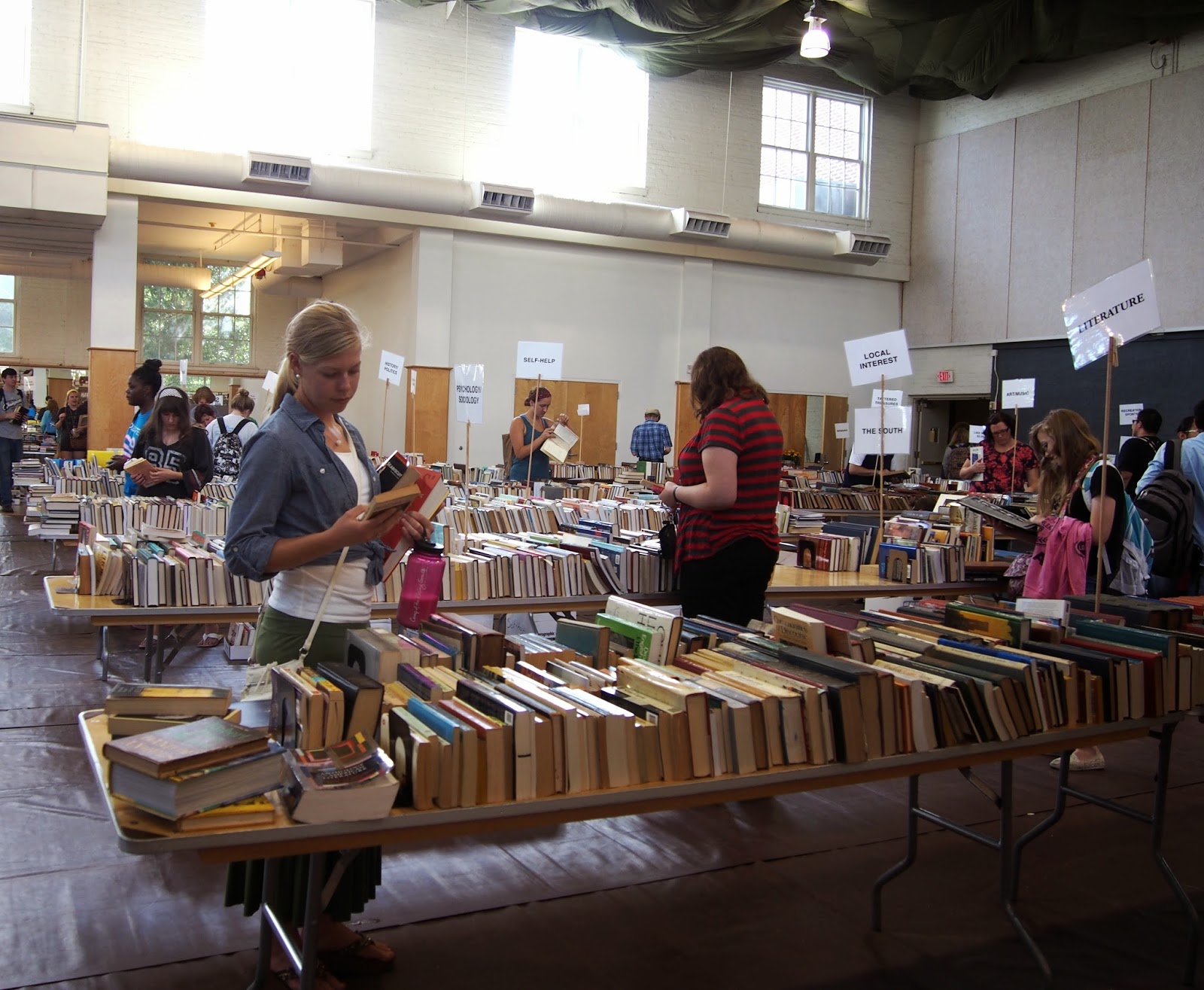 Wow, did I have fun. I bought a very large stack of WWII books, some literature, a little poetry and a battered little book published in 1894 that has gorgeous illustrations. I love old illustrations. I'm not going to load the photos of my acquisitions unless someone begs, but I did snap photos of them. 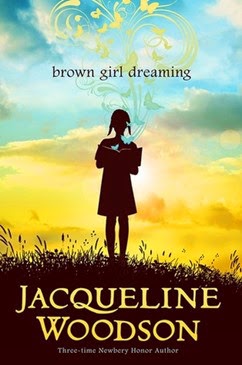 Only one book arrived and it was a purchase: Brown Girl Dreaming by Jacqueline Woodson. I bought it primarily because of all the recent chatter about diversity in reading and whether or not publishers are actually selecting books that are representative of the true experience of, say, a minority or an immigrant or someone in another country.  "Is our literature white-washed?" That's the question that's been bandied about.

To be honest, I didn't know what to think so I didn't participate in the discussions. But, after a good bit of pondering, I came to the conclusion that the best way to discover books that are genuine in their representation of a particular group of people, is probably just by listening to recommendations of those who live(d) it. Meaning, if I want to read about the immigrant experience, or what it's like to be Asian in a heavily-Caucasian nation or about thoughts on life as an African American or a gay dude or whatever, the best thing to do is seek out an immigrant, an Asian, an African American, a gay friend, whoever, and ask for recommendations.

I didn't have to ask. I got to eavesdrop on a conversation in which an African American friend talked about how much she loves Brown Girl Dreaming. As Bill Engvall says, "There's your sign." I ordered a copy and am really looking forward to reading it.

Actually, nothing. I haven't picked up Hieroglyph since reading the first story, but I do plan to continue on, now that I've finished The Giver for my F2F group's discussion. I was beginning to think last week was going to end up being a 1-book week because I spent most of the week reading Bringing Out the Dead, then I managed to finish The Giver and Momosas due to a 4:00 AM wake-up call. If waking up uncommonly early results in the quick repair of a bad reading week, that's just dandy by me.

I am getting close to catching up on my backlog in the sidebar but I also have a backlog of children's books that I haven't reviewed. I don't know why I don't add those to my sidebar as I read them. Probably because they're so short and there are often so many of them that the book images would go on forever if I added them all, maybe partly because I feel guilty listing them as "books read". Hard to say. At any rate, I may have to have either a children's day or just bash out children's book reviews for several days, once I've caught up with the rest. I've left some of them long enough that I'll need to do a bit of rereading. Not a problem. I love an excuse to read a children's book. The Final Countdown is an old family favorite that was released in 1980. I was in the mood for something intense on Saturday night. My first thought was a disaster movie. Maybe The Towering Inferno or 2012? We looked up at least a half dozen movies we don't own on Amazon Prime's streaming and none of them were available for free streaming. So, I went to Ye Olde Faithful DVD Drawers and pulled out The Final Countdown.

In case you haven't seen it, The Final Countdown is about a United States aircraft carrier that goes through an unusual storm and travels back in time to December 6, 1941. They are near Pearl Harbor and everyone knows Pearl Harbor will be hit by the Japanese, the next morning. The crew of the S. S. Nimitz has the power to prevent the destruction of the American fleet. What will they do?

I love The Final Countdown. Action, time travel and WWII? You just can't beat that combination. 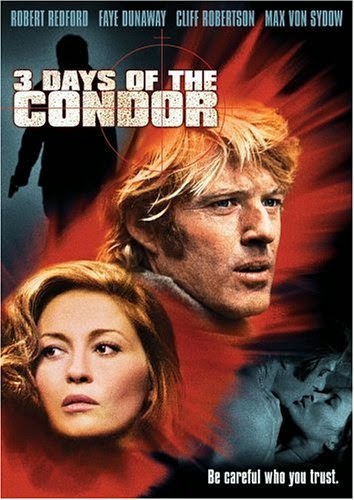 The next day, we were channel-surfing and nothing seemed to be on so I was on the verge of digging through the Robert Redford stacks, again, when we happened across 3 Days of the Condor, another old favorite of mine -- but not my husband's (he hates violence; I had to keep luring him back into the room) -- and a Robert Redford movie that we don't own. Serendipity!

In 3 Days of the Condor, Robert Redford plays a man who works for the CIA. He and his fellow agents are charged with the task of reading everything they can find that might bear some hint of spy activity, run text through the computer to see if it detects anything unusual, and theorize about what subversive activity may be going on in the world at large. Redford's character runs out the back door to get lunch and when he returns he discovers everyone he works for dead, murdered by an assassin. He calls his superior but quickly discovers that the agency can't be trusted and goes on the run.

3 Days of the Condor came out in 1975. Bloody scenes weren't as graphic in the 1970s, which is rather refreshing.

Last but not least:

Besides being a great week for books and movies, we became grandparents to a beautiful baby girl, last week. My son and daughter-in-law have asked that we not share either her name or photographs (which is miserable, but I have to respect their request) publicly and I was so confused about what, if anything, I could say that I just said nothing for days. But, then it occurred to me that I can't just pretend she doesn't exist. So, there you go. We have a grandchild. Woot! Welcome to the world, Baby Girl!

©2014 Nancy Horner. All rights reserved. If you are reading this post at a site other than Bookfoolery  or its RSS feed, you are reading a stolen feed. Email bookfoolery@gmail.com for written permission to reproduce text or photos.
Posted by Bookfool at 2:35 PM