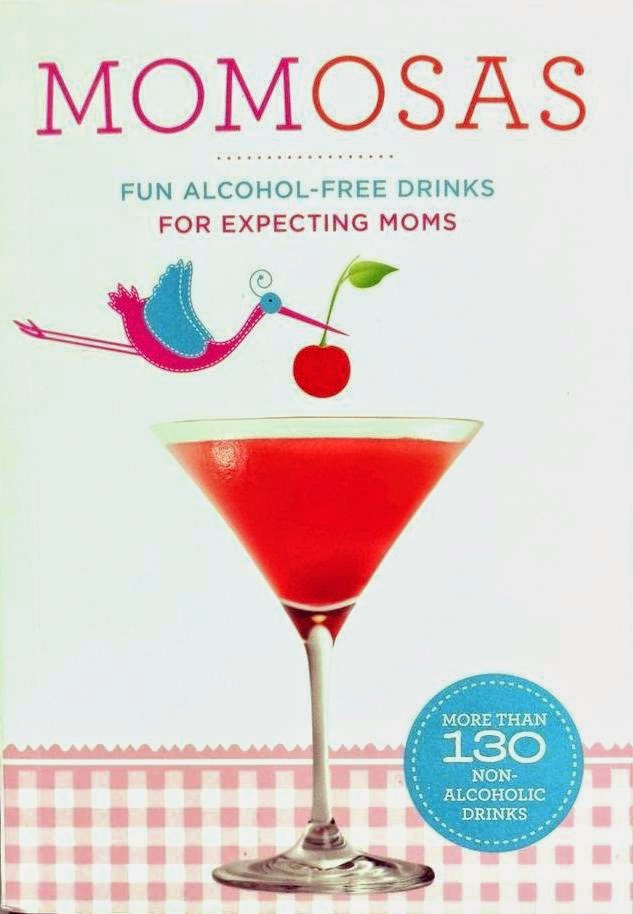 I'll bet you guys thought I was gone for good, right? Not quite, although I'm just dropping in for about a week and then I'm going to take another week off. I still need to spend time away from the Internet for my sanity, but I feel like doing a bit of reviewing. Might as well go for it when the mood strikes.

I've mentioned Momosas: Fun Alcohol-Free Drinks for Expecting Moms by Paul Knorr in a few posts. It seemed like a fitting book to review because my daughter-in-law just happened to be expecting when the book was offered to me. I figured we'd try a few drinks and then haul the book up to New Jersey and mix up a few more. Best-laid plans and all that. We have managed to mix up one drink and it was fabulous but, first, a few thoughts and a comment.

I'm not a drinker, so that was the second reason I accepted Momosas. I figured it would be a fun way to add some variety to my life. There were a few things about the book that jumped out at me from a "just a non-drinker" persecutive, though:

1. Odd measurements - I'm not accustomed to recipes written as "one part this, one part that," and expected precise measurements. I had no idea what a "jigger" was, nor had I ever shaken a drink over ice and then poured it out. I had to have my husband explain a few things to me. That probably won't be a problem for people who typically drink.

2. The first section of the book consists of drinks in which vinegar is used to give the drinks the taste of alcohol -- but without tasting like vinegar, of course. It simply gives them the tangy zing of alcohol. Since I've never developed a taste for alcohol, I found that particular section unappealing. But, it's just one portion of the book and certainly not enough to recommend against it to those who don't normally drink. All two dozen of us. ;)

3. There are a lot of ingredients in many of the drinks. That's great if you're entertaining or you plan to mix large batches for yourself, but if you're just planning on the occasional drink for fun it will definitely narrow down the number of recipes that are of interest.

4. Most of the drinks are really, really heavy on sugar. This particular item might be of interest to some expectant mothers. My daughter-in-law, a doctor, said she cut out alcohol primarily to reduce her caloric intake so she wouldn't gain too much excess weight. It might be wise to substitute fresh fruit for some of the juices to avoid added sugar.

Those were my initial thoughts as I flipped through the book. When it came to the mixing of actual drinks, we got the ingredients for a fruity drink but didn't get around to mixing it up before we left town to meet the little one. Kiddo came home to watch out for the kitties and drank most of the juice we'd gathered for that, while we were away. So we'll try gathering ingredients again, later. We did make one drink, the "Trimester High": 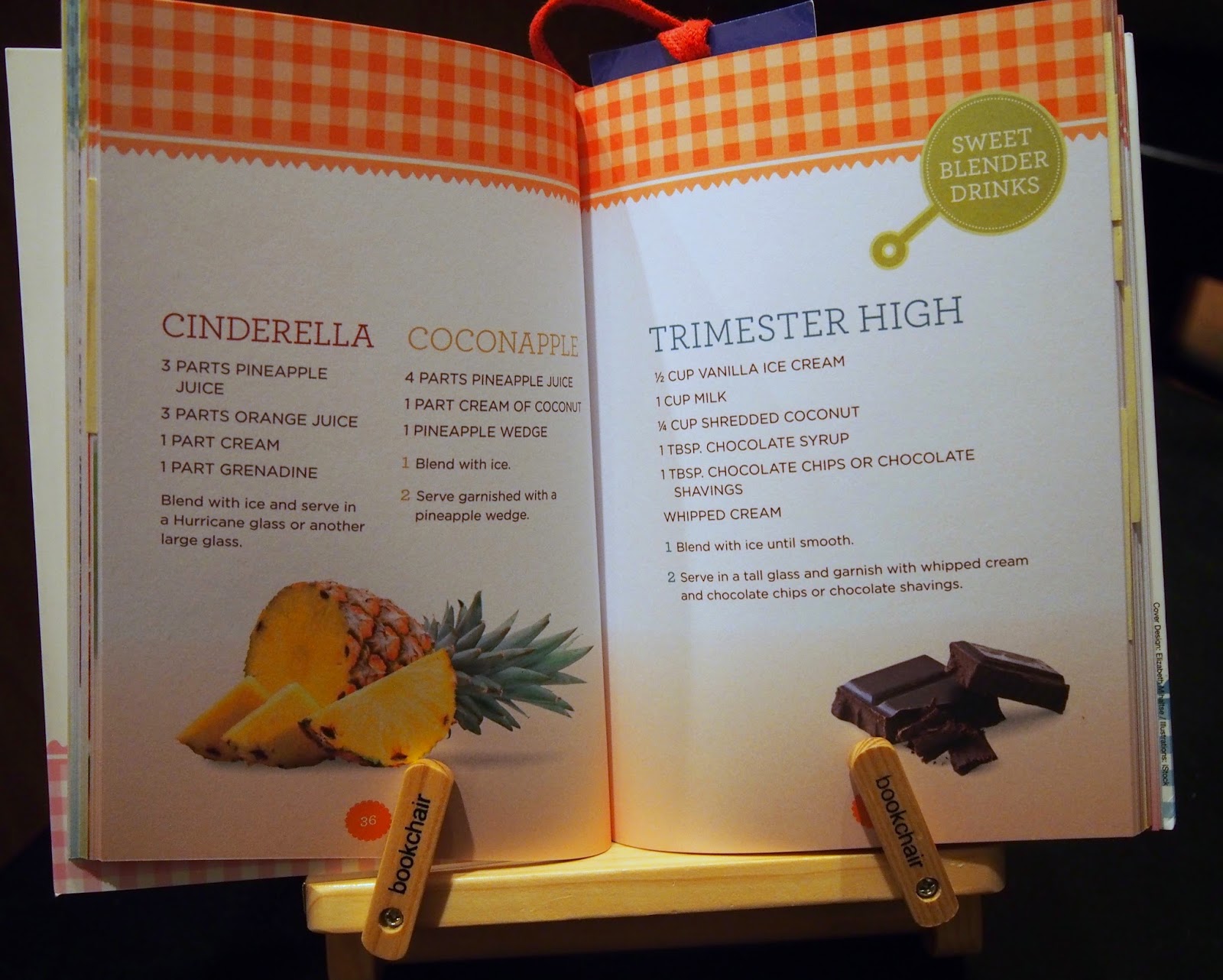 Hmm, the upload quality looks bad, as I'm typing. The recipe is actually a rare one that uses specific measurements rather than parts but that didn't influence our choice. We chose it based on the ease with which we could acquire ingredients (and the fact that we already had some of them on hand). Plus, it sounded good. In case you can't see the image, it contains ice cream, milk, shredded coconut, chocolate syrup, chocolate chips or shavings (we used chips), and whipped cream. When we got to "blend with ice", we kind of stared at each other because the recipe didn't specify how much and then decided to just wing it and use a cup or so, adding more if necessary. It worked fine and the drink pretty much tasted like dessert in a cup. It was delicious. 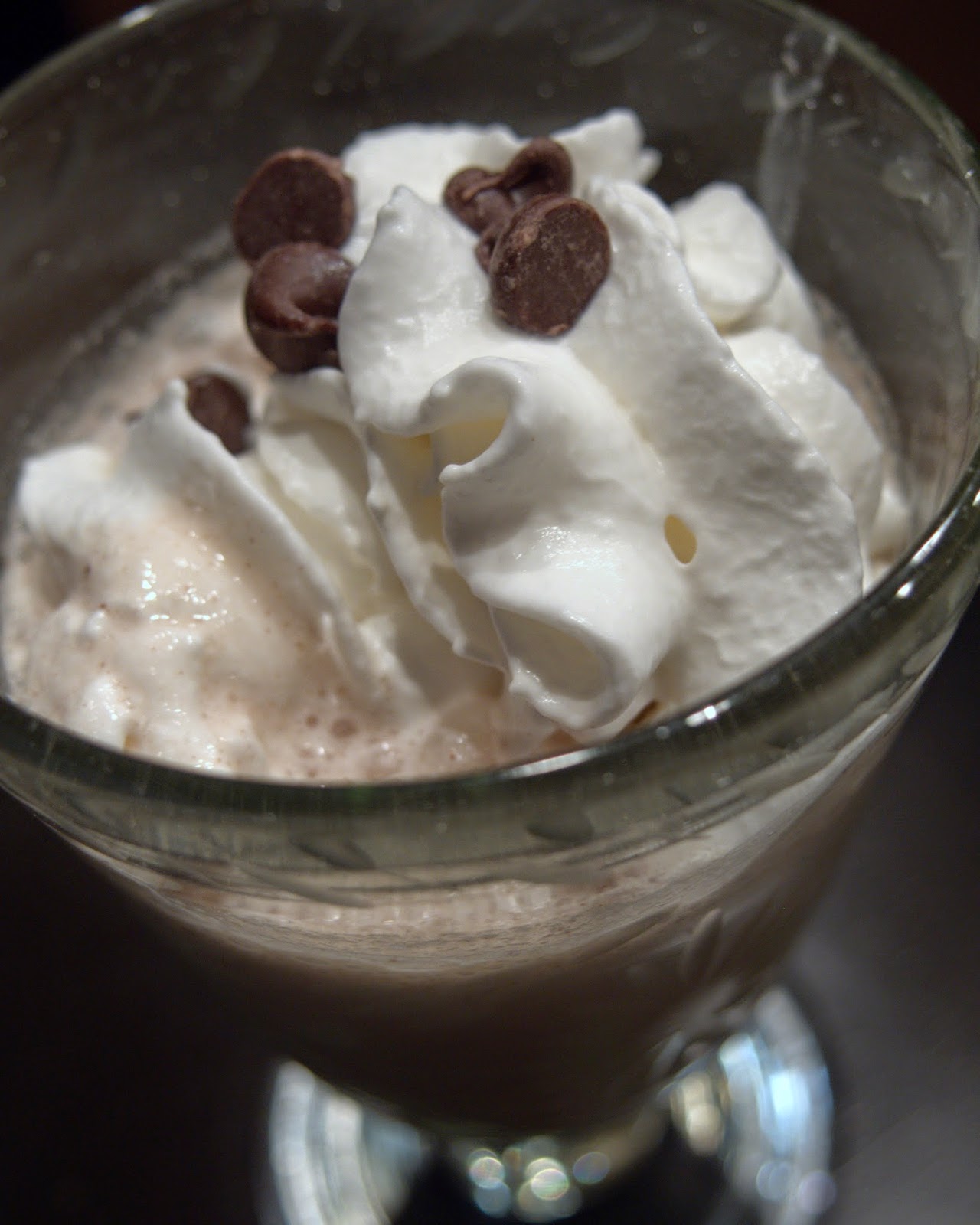 As to leaving Momosas with the new mama, I opted to skip that. I'd hoped the new parents would flip through the book (which I took to their house) in my presence and let me know their opinions; but, they were super busy with baby. My son did briefly flip through when I was not around and said he saw a few recipes he'd like to try, so that's positive. If/when we try more of the drinks or pass it on and get feedback from Eldest, I'll let you know. I have quite a few marked with post-its and do plan to give them a go.

The bottom line: Recommended I'd particularly recommend Momosas for its target audience: expectant mothers who plan to make large batches of drinks for social gatherings. If you're looking for a book of non-alcoholic beverage recipes for other reasons, like not being a drinker and just desiring to insert a little variety in your world, I'm certain you can find at least a few drinks that will interest you, although most are heavy on sugar and it might be wise to substitute fresh fruit for some of the juices recommended. Husband and I both found the recipes intriguing and we're looking forward to trying more. We were pleased with the results of the drink we tried. It makes an excellent dessert drink.

My thanks to Sterling for the opportunity to review Momosas!

©2014 Nancy Horner. All rights reserved. If you are reading this post at a site other than Bookfoolery  or its RSS feed, you are reading a stolen feed. Email bookfoolery@gmail.com for written permission to reproduce text or photos.
Posted by Bookfool at 8:34 PM