I got exactly one book, this week (from HarperCollins), Hieroglyph, ed. by Ed Finn and Kathryn Cramer: 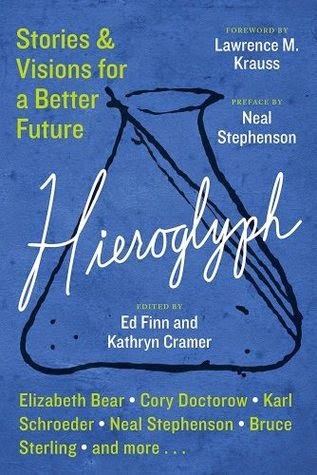 I did finish two books but most of last week was an ADD reading week - one of those weeks when you pick up a book, read a little, put it back down, pick up another, read a little, put in a bookmark and come back but then get bored halfway through the book, pick up a book . . . ugh. I hate those weeks. I read 120 pages of I, Robot by Isaac Asimov (interconnected short stories) and I'm unsure whether or not I'll finish it. The quantity of grammatical errors and oddities in the book has surprised me. His characters say "somewheres" instead of "somewhere", for example, and one used the word "misfunction" rather than "malfunction".

Still reading Momosas and was hoping to mix up some of those drinks, this weekend, but my plans were thwarted. Perhaps next weekend.

Kiddo was home again, this weekend, and he's a fan of Redbox rentals so we watched Captain America: The Winter Soldier. I liked it. And, then, because Robert Redford was in CA:TWS, I went digging for Robert Redford movies and we watched Butch Cassidy and The Sundance Kid, although I confess that we turned it off before the end because I didn't feel like I needed to see that last scene in which Butch and Sundance run out into a hail of bullets. You don't actually see their deaths but it still makes me cry.

Since I've freed myself to write what I feel like writing and read what calls to me almost everything I've read lately has been from our home library, I'm considering a quickie post covering the last of the books in my sidebar so I can stop looking at them and feeling like someone poured concrete around my feet. I feel stuck, in other words, like I need to do something to move on but maybe it's just going to take a quick bulldozing to get 'er done. I've written about the Monument 14 books, though. I'll probably go ahead and post that. We shall see. I like not knowing what I'm going to feel like writing, from one day to the next.

I realized that NaNoWriMo is coming up, last week, and followed a group dedicated to National Novel Writing Month on Facebook. While it's a heavy-posting site and therefore may end up getting trashed, a post encouraging followers to free write for 5 minutes got me started writing a story that I've been pondering for ages. Wahoo for that! I've been stuck in that way, as well. Half of me thinks that I need to give up blogging completely if I want to return to writing fiction because I'm kind of a one-trick pony. The other half is the side that keeps tugging me back whenever I consider stepping away for good. When my two sides start having a fist fight, it's going to get ugly.

Gotta go. Hope Monday has been kind to you.

©2014 Nancy Horner. All rights reserved. If you are reading this post at a site other than Bookfoolery  or its RSS feed, you are reading a stolen feed. Email bookfoolery@gmail.com for written permission to reproduce text or photos.
Posted by Bookfool at 1:52 PM