Blast from the Past: The Broken Shore by Peter Temple

Early in my blogging years, there was a wonderful e-zine by the name of Estella's Revenge. I occasionally wrote reviews or articles for Estella's Revenge (now known as The Estella Collective and, I believe, archived but not active) At the time, I didn't cross-post them to Bookfoolery, instead posting a link to the e-zine when it published. I've decided to occasionally move some of those old reviews to Bookfoolery so that I'll have them on my own site for future reference.

One of the books I reviewed for Estella was The Broken Shore by Peter Temple, which I just purchased. I gave away the ARC long, long ago and bought it to reread because it's an Australian title that was discussed in the Australian Lit course I recently took via Coursera. Although I doubt I'll review it a second time when I reread it, I'm looking forward to reading it with notes that will hopefully allow me to read from a fresh perspective.

My review of The Broken Shore, originally published April 1, 2007: 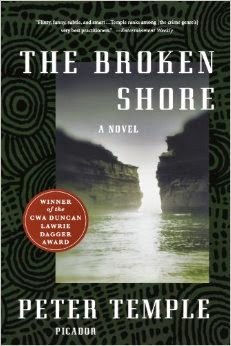 The Broken Shore
Written by Peter Temple
Published by Farrar, Straus and Giroux

"Did it cross your mind," Leon said, leaning on the counter, "that our lives are just like stories kids tell you? They get the and-the-and-then right, and then they run out of steam and just stop."
"You've got kids?" It had not occurred to Cashin.
"Two," said Leon.
Cashin felt a sense of unfairness. "Maybe you shouldn't think about your life that way. Maybe you shouldn't think about life at all. Just make the coffee."

Detective Joe Cashin isn't the man he used to be. Since his brush with death, Joe lives with chronic pain and paralyzing guilt. Sent away from the big-city homicide unit to a post in his quiet little hometown on the South Australian coast, Joe walks his dogs and considers rebuilding the ruin of his ancestral home.

When he's called to the scene of a crime, though, Joe's old instincts take over. Wealthy and prominent citizen Charles Burgoyne has been badly beaten in his own home and may not survive. A missing watch that two Aboriginal boys try to sell in a pawn shop in the city convinces police that they've found their suspects; and, the locals are happy to accept that the boys are to blame. Joe is not so easily convinced. When the investigation is botched, it appears the crime may never be solved. Given time off to let the controversy settle down, Cashin becomes even more suspicious and investigates on his own.

The Broken Shore is a pleasingly complex, if gritty, crime novel that appears to thematically state, "Things are not always what they seem." The story unfolds slowly, layer by layer. While it isn't, in the end, completely mysterious - Temple does pretty much throw the answers in your lap - that doesn't matter. What matters is the way he tackles issues like racial prejudice, life as an itinerant worker, guilt, corruption, compassion, and politics.

For the uninitiated North American, there's a glossary of Australian terms in the back. Australian English is a little mind-blowing if you're not accustomed to it. The glossary is immensely helpful; it doesn't cover every strange word, but there are enough definitions to keep the book from pitching into utter incomprehensibility.

Also of note is choppy prose; I don't read a lot of crime novels but that seems to be fairly common, not wasting words. Sentences can be as brief as, "Bobby waited." Often, the clipped dialogue of several characters comes in such a tumble of phrases that reading occasionally feels much like translating code. Yet, it somehow works. Real people don't always speak in sentences; often, in fact, having their own private language.

Joe Cashin is a likeable character: witty, tenacious, haunted by past experiences, hopeful but often overwhelmed by guilt or pain, kind and nonjudgmental. He's worth spending time with. His language and that of those he works with or interviews is at least "R-rated". There was one frequently used term I consider "X-rated" and I found myself repeatedly wondering, "Is this not as bad a word in Australia?" For those who like harsh realism and crusty language, it's an excellent story; others should bear in mind that the language is definitely rough.

The British copy of The Broken Shore that I just purchased does not contain a glossary. However, thanks to "Australian Literature: A Rough Guide", I now know there is a convenient online dictionary: the Australian National Dictionary.

Hope you enjoyed this blast from the past!

©2015 Nancy Horner. All rights reserved. If you are reading this post at a site other than Bookfoolery  or its RSS feed, you are reading a stolen feed. Email bookfoolery@gmail.com for written permission to reproduce text or photos.
Posted by Bookfool at 2:09 AM