Three for National Poetry Month - On the Bus with Rosa Parks by Rita Dove, House of Light by Mary Oliver and Where Robot Mice, etc. by Ray Bradbury 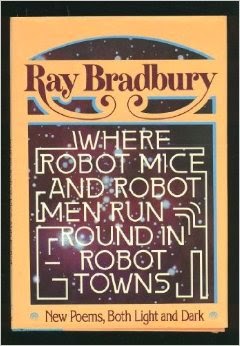 My subject line is out of order specifically because I didn't want Where Robot Mice and Robot Men Run Round in Robot Towns by Ray Bradbury to get priority placement. It's that bad. At Goodreads, I described it as "hackneyed, uninspiring, egotistical,  often clearly envious of others." It's not unusual for a poet to use another poet for inspiration but there's often an unsettling undertone of envy or current of braggadocio when he refers to literature.

Having said that, there were a few random poems that I got something out of, if only conceptually. The poem about a man reflecting on the childhood games he played with his friends while looking at the landscape in which their young imaginations soared is one anyone reflecting on a lost childhood can appreciate in spirit. But it turned a little angry in the end when he noted that there were no children outdoors because they were all watching TV (and he even got in a little dig on Walter Cronkite -- funny, from our perspective, as most people now look back fondly on the days when there was a newscaster they could trust). What would he think of children now, with their iPhones, video games, home computers and TVs?

Another poem I liked was about a drunken uncle that the family was happy to bury but who then came back to haunt them till the author, a young boy, shouted at the ghost to go away. Humorous, yet definitely one of those poems that came off as egotistical. If he's in the poem, you can bet his part is inflated.

There were some similar themes to Bradbury's prose work. Lots of mentions of dandelions, dandelion wine, science, the future. Honestly, he should have stuck with prose and just hidden this collection away. It's amazing that anyone was willing to publish it, even given Bradbury's name power. Where Robot Mice and Robot Men Run Round in Robot Towns was published in 1970 and went through several printings, though. Mental shrug, verbal reject. Not recommended. 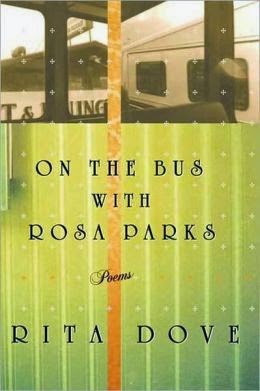 On the Bus with Rosa Parks by Rita Dove is more typical of a volume of poetry, at least to this reader, in that I found poems I loved, poems that perplexed me, poems that made me think. It's a nice mix.


One of my favorite poems is "Homework." I can't duplicate the way the poem is laid out on the page perfectly but here's an excerpt:


"The Negro and his song
are inseparable.
If his music is primitive
and if it has much that
is sensuous, this is simply
a part of giving
pleasure, a quality
appealing strongly
to the Negro's
entire being. Indeed,
his love of rhythms
and melody, his
childish faith
in dreams . . . "

Shit,
he'll take Science, most
Exacting Art.
In school when the teacher
makes him lead
the class in song,
he'll cough straight through.
Better
columns of figures, the thing
dissected to the bone.
Better
the clear and incurious drip
of fluid from pipet
to reassuring beaker.

Such a nice way to show how humans have a tendency to diminish each other, to narrow our viewpoint of each other by categories like race or sex or income. Some other favorites are "Maple Valley Branch Library, 1967," which any booklover will appreciate and "Dawn Revisited," about the glory of rising in the morning, which ends:

To hell with wisdom. They're all wrong:
I'll never be through with my life.

I also love "Ghost Walk," about a haunted castle. And, of course, the title poem.

Recommended - a lovely little collection about life in general, some of the poetry more specifically about being African American. There are several poems like "Homework" that would be especially fitting for Black History Month. I'll be looking for more poetry by Rita Dove, a Pulitzer-winning, highly feted former Poet Laureate of the United States. 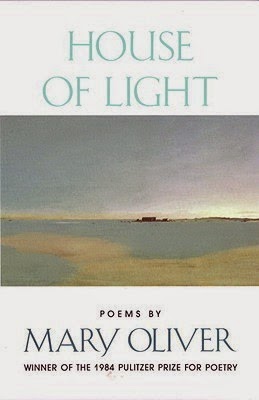 I snatched up House of Light, in spite of the fact that I'd just ordered a volume of Mary Oliver's poetry, for the usual reason: to get a taste of her writing without a huge time investment. I figured I can then go back and spend more time really immersing myself in her poetry, later.

I've been pondering Mary Oliver for a while. Her poetry has been highly recommended whenever I've asked for recommendations, but I honestly knew nothing at all about her. Best to just dive in with poets, I've found. And, what I discovered is that she is a nature lover, like myself. It took some time to adjust to her poetry, which is often a little startling and graphic; but, in the end I found myself absolutely loving the sensation of drowning in the beauty. Just before I picked up House of Light, I read a line from "The Summer Day" quoted in Find the Good by Heather Lende:

Tell me, what is it you plan to do
with your one wild and precious life?

What a wonderful line to think about, frame, put to work in your everyday world. And, "Summer Day" is in House of Light, so I was thrilled to see it in context. Another favorite excerpt is in "The Ponds," as Oliver observes that life is imperfect, physically and otherwise:

Still, what I want in my life
is to be willing
to be dazzled--
to cast aside the weight of facts

and maybe even
to float a little
above this difficult world.
I want to believe I am looking

into the white fire of a great mystery.
I want to believe that the imperfections are nothing--
that the light is everything--that it is more than the sum
of each flawed blossom rising and fading. And I do.

Isn't that beautiful? I'm so glad I bought a nice-sized volume of Mary Oliver's poetry. I'm going to enjoy it, I'm sure.

Recommended - Sometimes harsh, sometimes beautiful, with special focus on nature. I think Les of Prairie Horizons was the first to recommend Mary Oliver to me, although I'm not entirely certain. Thanks, Les!

©2015 Nancy Horner. All rights reserved. If you are reading this post at a site other than Bookfoolery  or its RSS feed, you are reading a stolen feed. Email bookfoolery@gmail.com for written permission to reproduce text or photos.
Posted by Bookfool at 1:29 PM