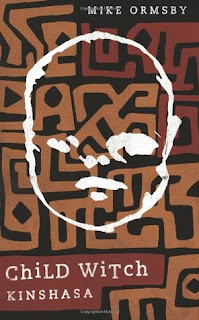 I haven't done a DNF post in quite a while but I think Child Witch Kinshasa is worth mentioning and I got farther into it than I do most books that I set aside. The book is just under 500 pages long and I stopped at p. 130.

Child Witch Kinshasa is about two people, a British man by the name of Frank Kean and an African boy named Dudu. Frank has arrived in the Democratic Republic of Congo to train journalists but during his first night he hears chanting, drumming and screams that sound like a child in pain.

Dudu's father was killed when he stepped on a land mine during a recent war. His uncle Moses has become the head of the family but the bar Moses owns is failing and he's convinced that there is sorcery keeping him from succeeding. The local tradition is to blame adversity on children, accusing them of witchcraft and paying a minister to perform unspeakably cruel exorcisms to frighten away the demons by which they're allegedly possessed. The "ministers" who perform these rituals are, in fact, only after power and money.

You can figure out where this is headed. Dudu and his younger brother are accused of witchcraft and Dudu must escape. Frank finds out about the exorcisms and discovers that they're not even considered newsworthy by the locals, so he makes it his mission to bring attention to the children's plight. Eventually, he meets Dudu but I didn't make it to that point.

This may be a bit of a spoiler so I'm going to turn the text white and you can highlight it if you dare.

Dudu has already been accused of witchcraft and has managed to escape but someone has stolen his money and he's been abandoned by the people who promised to help.

Why I decided not to read on:

First, let me just say that I would not have made it so far if this book wasn't solidly written. There were a few times I thought, "This sentence could stand some tightening," and I've mentally crossed out a few words, but Child Witch Kinshasa is a compelling story and it's based on a current practice. Children are still being accused of witchcraft and tortured. When the author pitched his book to me, I was not interested for pretty much the same reason I can't bear to read on, but he was persistent because it's important to him.

Having said that, I must admit that the book was giving me that, "I don't feel like reading tonight," sensation that you get when you really don't want to continue but are having trouble admitting it to yourself. Child Witch Kinshasa is, in other words, just a bit too nerve-racking for this reader.

Why I'd still recommend it:

I think the story is an important one because it's something that -- much like human trafficking -- exists and is known but not necessarily widely. And, because it's culturally embedded, the practice is not likely to stop without some sort of outside intervention. So, the more people know about child exorcism in the Congo, the more likely something will be done to stop it. Also, it really is a pretty good read. It seems odd to say that the reading was going pretty quickly and yet I stopped. I don't very often abandon a book because it unsettles me. I'm okay with being unsettled. But, if I start to feel like I'd rather not read at all than continue, it's time to move on.

Child Witch Kinshasa is a self-published novel by Mike Ormsby (CreateSpace). I know it's available at Amazon but beyond that I'm uncertain. I received my copy directly from the author. There is a sequel: Child Witch London. I was kind of hoping I'd tolerate the book so I could read its sequel, since I love a London setting.


©2015 Nancy Horner. All rights reserved. If you are reading this post at a site other than Bookfoolery  or its RSS feed, you are reading a stolen feed. Email bookfoolery@gmail.com for written permission to reproduce text or photos.
Posted by Bookfool at 2:11 PM

Email ThisBlogThis!Share to TwitterShare to FacebookShare to Pinterest
Labels: DNF but advise you to read my reasons, Mike Ormsby