When the Moon is Low by Nadia Hashimi 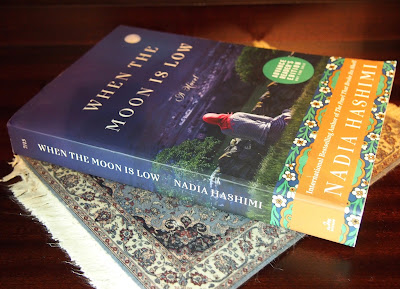 ~p. 38 of Advance Reader Copy, When the Moon is Low (some changes may have been made to the final print version)

While I was reading When the Moon is Low, I mentioned that I had to reread the first 22 pages because they didn't leave an impression and that I was continuing to find it a struggle to get into. It is, as I said, a quiet and very understated sort of novel. But, I wanted to give the book a fair shot and, while the pace was fairly slow, particularly in the beginning, I did eventually find that I wanted to know what was going to happen.

When the Moon is Low tells the story of Fereiba. Beginning when she was a small child and realized that she was the cause of her mother's death (from childbirth complications), Fereiba describes her distant father, the arrival of a stepmother and several sisters and her first love. I'm pretty sure that her marriage is the ending of Book 1, but I just flipped through the book and couldn't find the dividing line. Fereiba's arranged marriage, though, begins an entirely different phase of her life.

After marriage, Fereiba and her husband have two children. He works as an engineer and she is a teacher but the Taliban's power ends her career. When tragedy strikes and Fereiba is left to manage on her own, that's really when the book becomes particularly interesting. At one point, a heavily pregnant Fereiba is in pain and tries to make her way to the hospital but she's sent home because the man accompanying her (a neighbor) is neither her husband or a relative.

The latter part of the book is about the family's life as refugees after Fereiba decides that in order to survive she must take her children and try to make her way to England, where one of her stepsisters lives. The storyline then begins to alternate between the viewpoints of Fereiba and her eldest son, Saleem, who eventually becomes separated from the rest of the family.

What I really loved about When the Moon is Low was the way Hashimi laid out the facts through Fereiba's eyes. I've heard about how Afghanistan went from a country where women worked and dressed like women in the western world to a place where women are covered from head to toe and not allowed out in public but there are certain aspects of that change that hadn't occurred to me, like the fact that the disappearance or death of a husband meant no income, no way to go out to buy groceries if you have money, really the complete impossibility for a single mother to function at all.

And, the view of life as a refugee is also fascinating. I've read about what it's like for refugees, having to sell their possessions to pay ridiculous fees to people smugglers, only to end up begging in a country that allows no path to citizenship or caught and sent back to the country from which one escaped. When the Moon is Low does a very good job of giving you perspective of the refugee experience. There's a lot to think about.

I disliked the slow pace of When the Moon is Low, but once I became invested in the lives of Fereiba and Saleem (and the other two children, who have lesser roles), I did find myself eager to get back to the reading, each day. But, I gave the book only a slightly above-average rating, both because of the pace and the fact that it's good but not a particularly elegant work of writing. There were times I felt the urge to reach for a red pen. I did find the ending satisfying and I'm glad I read When the Moon is Low. I have not read Nadia Hashimi's first book, The Pearl that Broke its Shell, so I can't compare the two.

Recommended - While not a favorite, When the Moon is Low is a fairly well-written book that nicely illuminates both the changes in Afghanistan that took place upon the rise of the Taliban and what it's like to be a refugee. I found the storytelling slightly devoid of emotion. There were moments that it was tense or deeply sad or frightening; it's well plotted if slow-paced. I just never felt any huge rush of emotion during those moments. Still, a good book that I recommend for a time when you want to read a quiet, character-centered novel.

Side note: In the ARC, Fereiba's husband is described as a mechanical engineer, although it sounds like the work he does is that of a civil engineer. I noticed he's described as a civil in one of the book blurbs I read, so that little detail may reflect one of those rare instances in which something was changed prior to publication. I don't have access to a finished copy (it's not out yet, after all), so I'm unable to find out if a change has been made.

©2015 Nancy Horner. All rights reserved. If you are reading this post at a site other than Bookfoolery  or its RSS feed, you are reading a stolen feed. Email bookfoolery@gmail.com for written permission to reproduce text or photos.
Posted by Bookfool at 11:06 PM