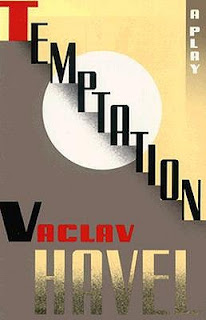 (The DIRECTOR steps up to FOUSTKA; FOUSTKA stands up. The DIRECTOR places his hand on his shoulder and gravely looks at him for a short while.)

DIRECTOR: The soap and everything else!

Out of context, the excerpt above may sound odd but in Vaclav Havel's Faustian play, Temptation, it's actually pretty funny because it's meaningless. In Temptation, Foustka is the Faust character who is tempted by the devilish Fistula, a man with a smelly foot fungus. Foustka is a scientist but the playwright leaves the work of the scientists ambiguous. All we know is that black magic is taboo and Foustka has been studying the occult for some time. When Fistula offers Foustka the chance to further his career and expand his love life by dabbling in the dark arts, Foustka is at first resistant but then gives in with the expected results (selling your soul never works out).

Temptation is by far the most light-hearted version of Faust that I've ever read and I enjoyed it immensely. I've read a few other stories that were obviously based on Faust but I didn't realize just how many similarly Faustian works of art exist (including poetry, plays, novels, music) until I looked up "novels based on Faust" on Google and came across this Wikipedia entry: Works based on Faust. And, it's not all-inclusive. Fascinating, this human obsession with temptation by the devil. As it turned out, I've read a lot more works based on Faust than I realized. I know I've read at least three others since I began blogging but I can find only two posts and can't recall the name of the third. Here are links to my reviews of the two I do recall:

There were distasteful characters and moments in Temptation but I found the levity in Temptation made the reading unusually satisfying, although near as I can tell I've enjoyed every version of Faust I've read except The Phantom of the Opera. That one was a DNF, although I may give it a second go, eventually. I did enjoy the play, but mostly because I was excited to see Welsh actor John Owen-Jones (who has also played Jean Valjean) in person.

Recommended - I'd love to see Temptation on stage but it was definitely entertaining reading the play and imagining the acting. An unusually amusing version of Faust.


©2015 Nancy Horner. All rights reserved. If you are reading this post at a site other than Bookfoolery  or its RSS feed, you are reading a stolen feed. Email bookfoolery@gmail.com for written permission to reproduce text or photos.
Posted by Bookfool at 2:47 PM