Monday Malarkey - Not the most bookish week 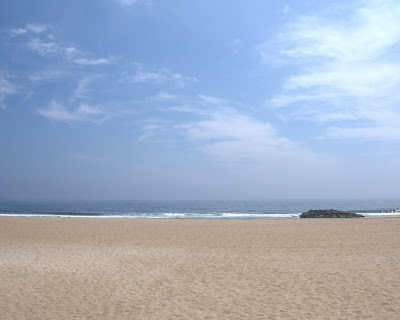 I don't have any book stack photos to share, today (although I'll do some image-snatching), so you get a glimpse of the New Jersey coast. There's not a whole lot of malarkey to report, this week, unfortunately. 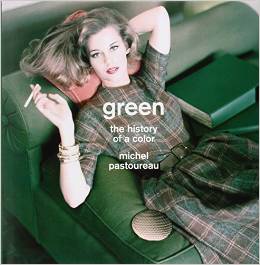 Yes, really, this is the only book that arrived, this week! So shocking. I even walked around the house, looking in all the usual places, to make absolutely certain I didn't overlook anything. 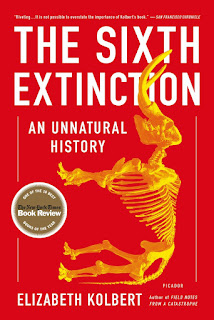 Yes, again, only one. But, it's a doozy. I've read quite a number of books on climate change (The Sixth Extinction is about past mass extinctions and just discusses climate change as a factor in extinction) but this is the first one that's really talked about ocean warming with any depth and it's bracing stuff. According to the scientists Kolbert spoke to, we've got about 35 years before the warming and acidity of the ocean lead to a mass extinction of sea critters.

The heat and humidity have so fully descended that I have a feeling we won't return to deck painting till fall. And, as Huz noted, "Other problems keep interferring." One of those was a college grad sticking his foot through the living room ceiling, causing drifts of pink insulation (wow, this house is really well-insulated) to pile up on the living room floor and a red wasp to dog the poor guy trying to patch the hole. And, then someone who goes by the name "Bookfool" dropped an earring down the drain, today. Sorry, Huzzybuns.

Before it became gruesome outside, we did manage to attend a surprisingly cool and breezy baseball game on Friday night. We got free bobbleheads. Jealous? It was kind of a boring game (a pitcher's duel?) most of the night but our team managed a slender victory in the 9th inning. And, then we stayed for the fireworks show, which we've never before done. It was fabulous. Unfortunately, I don't have photos because I haven't been taking a camera with me to baseball games since I broke the good camera. My point-and-shoot can't do baseball justice.

Since several people have asked me (and I didn't bother making an announcement), just a side note to those of you who are Facebook friends: I'm taking a brief holiday from Facebook. I'll be back. I had just read an article about why it's not necessary to always announce your plans on social media, right as I came to the conclusion I needed a break, hence the disappearance without mention.


©2015 Nancy Horner. All rights reserved. If you are reading this post at a site other than Bookfoolery  or its RSS feed, you are reading a stolen feed. Email bookfoolery@gmail.com for written permission to reproduce text or photos.
Posted by Bookfool at 8:54 PM