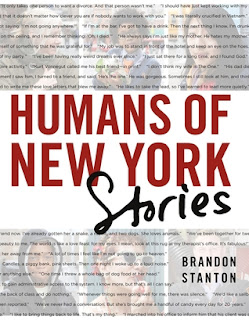 Humans of New York: Stories is a collection of photos and quotes or stories (some a single line, some a series of several photos and paragraphs) that are posted daily on the Humans of New York Facebook page. Some I recognized from that page but I've only recently begun following so most of the photos and their associated stories were new to me. The wonder of the project and the Humans of New York: Stories book is that it offers such a unique peek into everyday lives, for better or worse, a glimpse of what single event impacted someone or what was dominating their thoughts at that moment in time. And, sometimes they're just cute, whether quotes for kids or pictures of them with little or no commentary.

I asked my youngest son if he's familiar with Humans of New York, as I was reading, and he said yes, that he enjoyed it but he liked some of the stories better than others. He referred to a series of 4 photos that had just been posted, about a man whose wife was manipulative enough to fake abuse so that she could get access to free legal counseling and custody of the children when they divorced. The story ended happily; the truth eventually came out and he's now traveling the world when he has time off. But, there's no doubt that some of those stories are deeply unsettling, whether as examples of how people fall through the cracks or of how mental illness and abuse quietly destroy people.

I do love the inspiring stories the best. But, I think it's the stories of people who have challenges that break them which make the Humans of New York project so special. Everyone knows how easy it is to justify not giving a homeless person money or food, how simple it is to avert your gaze and pretend they don't exist. Reading their stories reminds you that they're human, too. They're not necessarily even uneducated or drug addicts, as most of us presume. Some have ended up on the street because some random domino effect caused their economic lives to come crashing down around them and there was nowhere to turn. Those are the stories we need to talk about, to ask ourselves what we can and must do to make changes to keep people from ending up alone and without a place to sleep.

Highly recommended - Great photos, fascinating stories. As a side note, since it just happens to be November and National Novel Writing Month is in progress, it occurred to me that Humans of New York: Stories might be an excellent story starters for writers. The stories are brief enough that it's easy to read a story and think, "I could expand on this, fictionalize it, make a novel or short story out of it."

©2015 Nancy Horner. All rights reserved. If you are reading this post at a site other than Bookfoolery  or its RSS feed, you are reading a stolen feed. Email bookfoolery@gmail.com for written permission to reproduce text or photos.
Posted by Bookfool at 1:34 PM