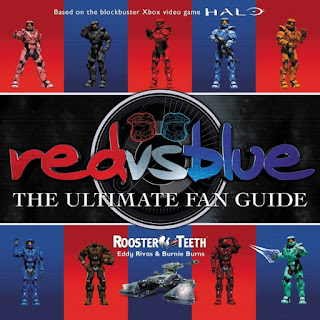 I waited till nightfall to start typing my Monday Malarkey just in case more books decided to launch themselves through my door, but no other books have arrived in the past two weeks. So Red vs. Blue: The Ultimate Fan Guide gets to sit up at the top saying, "Look at me, look at me!" I do have some purchased books on the way, but Red vs. Blue is the only book that's arrived in the last two weeks. It's a review book from Dey Street (a HarperCollins imprint) and I got it to try to talk my son into writing a review -- he's a fan. I'm not having much luck, so far, but I think the series is pretty funny, even though I don't entirely follow it, so I'll read, view, and review if I can't talk Kiddo into doing so. I snagged the image of the book from that HarperCollins site, incidentally. I must have been in a hurry when I snapped a photo of my copy; it was terrible. I thought it would be best not to share.

Just over 20,000 words! I'm kind of surprised that I'm still technically ahead. Although I deliberately went with a story that doesn't require a lot of research, it's not an easy story to tell because it's a genre that I kind of pick at around the edges: fantasy. I only like very light fantasy, e.g. Franny Billingsley or Gail Carson Levine (as opposed to the 800-page whoppers my son reads) so I'm attempting to write in a similar style. As in all National Novel Writing Month experiences I've had, there have been good days and bad. Since my attempt to write every day in 2015 came to an abrupt halt pretty early in the year, part of my goal in joining NaNo is to ramp the motivation back up. It's working; I'm enjoying myself and reconsidering how to structure my days so that writing time continues to be naturally built in when NaNo is over.

I haven't finished anything since Well Wished by Franny Billingsley, early last week. That's okay. Last month started out equally slowly and ended up with a bang. I'm enjoying my reading. I've returned to The Dust that Falls from Dreams by Louis de Bernières, the chunkster I opted not to take with me on vacation. I had to restart it because I took too long getting back to it but I've been every bit as immersed as I was when I mournfully left it behind, over a month ago.

The other book I'm reading is Sherlock Chronicles by Steve Tribe, one of my most exciting recent arrivals because I adore Sherlock. It is even better than I hoped it would be. After reading the introductory information and the chapter about the first episode, "A Study in Pink," we watched the episode. I have to tell you right now that if you're a Sherlock fan, Sherlock Chronicles is a must-read. I was stunned at how much perspective the background information added to the viewing of an episode of Sherlock I'd already seen several times.

Cat update: Wherever I go, there they are. 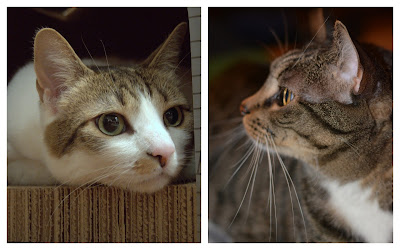 And, let me tell you, cats love it when you sit around typing for hours at a time -- at least, until they start craving a good laser chase or want Mom to roll a jingle ball. Fortunately, I need exercise just as much as they do, so we occasionally take breaks together.

What's up, my lovelies?


©2015 Nancy Horner. All rights reserved. If you are reading this post at a site other than Bookfoolery  or its RSS feed, you are reading a stolen feed. Email bookfoolery@gmail.com for written permission to reproduce text or photos.
Posted by Bookfool at 7:57 PM