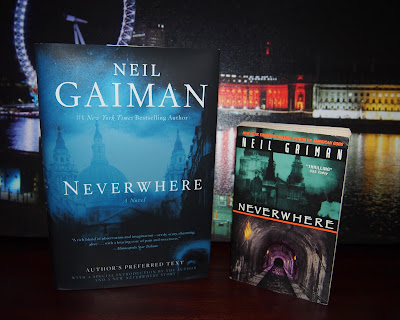 You'd think I would have written about Neverwhere, by now, wouldn't you? It's been a month since I finished the book. The Read-along turned out to be more of a buddy read with just 3 or 4 of us reading and only two of us chatting about it, but that was fine. I really enjoyed discussing Neverwhere with Florinda (link leads to Florinda's review of the audio).

Richard Mayhew is an "every man" type character who ignores his girlfriend's insistence to ignore a tattered, bleeding girl they discover lying in the street. Instead, he takes her home and opens up a path to London's dark, magical and mysterious underground world known as London Below. The girl Richard has rescued is named Door and her name is apt; she has a special ability to open doors. Door is on a mission to find out who killed her family and Richard is swept along into the dark world that lies within London's Underground and its sewers. Once you enter London Below, you become invisible in the world above. Richard can't go home.

Door begins her search with the Marquis de Carabas and then another character with an obvious name, Hunter. The Marquis owes her a favor and the Hunter will serve as her protection as she attempts to solve the mystery. But, Neil Gaiman likes strong heroines and Door is pretty tough on her own. Richard initially tags along because he has no choice in the matter but eventually he finds his own strength. There are two extraordinarily creepy characters known as Mr. Vandemar and Mr. Croup who will turn your stomach, an angel in the British Museum, and all sorts of wonderful London references.

I began reading Neverwhere on the plane to London and decided to stretch out the reading for a while after we returned. It was particularly fun to open the book at night and see a reference to some place I'd just been and, of course, I would have loved the book for its London references even if I hadn't been there at the time. Neverwhere is a unique, intriguing, bizarre, sometimes humorous adventure. I was riveted.

Highly recommended - An immensely entertaining adventure in which the darkness and mystery of an underground fantasy world and the characters inhabiting it intersect with the sometimes-frustrating and often goofy, slapstick world of the human cast into its depths. Neverwhere is now up there with my other favorite by Gaiman, Stardust.

I've mentioned that I purchased the radio performance so an update on that . . . nope, I haven't listened. I began to listen to it but I have no commute and sitting still to listen on the computer would just be crazy. So, I'm going to either try to load it to my iPad for the next time I travel or pop the CDs into the CD player (yep, I still have one of those in my vehicle) the next time I take a road trip of any kind. Till then . . . I did listen to a tiny bit and I agree with Florinda that it's best if you read the book or listen to the full audiobook, first.

©2015 Nancy Horner. All rights reserved. If you are reading this post at a site other than Bookfoolery  or its RSS feed, you are reading a stolen feed. Email bookfoolery@gmail.com for written permission to reproduce text or photos.
Posted by Bookfool at 9:14 AM